El Espace is a column dedicated to news and culture relevant to Latinx communities. Expect politics, arts, analysis, personal essays and more. ¿Lo mejor? It’ll be in Spanish and English, so you can forward it to your tía, your primo Lalo or anyone else (read: everyone).

I didn’t have papers for most of my life, so my Latin America — even the Dominican Republic, where I was born — was shaped by books and stories. The magical realist images in “One Hundred Years of Solitude,” by Gabriel García Marquéz, “Like Water For Chocolate,” by Laura Esquivel, and “The House of Spirits,” by Isabel Allende helped me imagine (and, let’s be honest, idealize) life back home: floating, ethereal women and clairvoyants; food that literally made you weep; fantasmas walking the halls. These books were part of a Latin American tradition of melding mysticism with political commentary, serious criticism hiding between the lines.

“One Hundred Years of Solitude” was published in the 1967, and an outpouring of memoirs and realistic fiction that dealt with migration and life for Latinos living in the United States followed it: “Dreaming in Cuban,” by Cristina García, “How the García Girls Lost Their Accents,” by Julia Alvarez, “The House on Mango Street,” by Sandra Cisneros, “When I Was Puerto Rican,” by Esmeralda Santiago. These books became classics of the form, focused on the dual identities of their characters. They were necessary additions to a limited number of titles for Latinx communities in the U.S. yearning to know themselves.

The 21st century has borne novels that push beyond identity. They experiment with style and substance, blend genres and feature characters whose ethnicities are only present in the background, if at all. Here are eight of those books, published in the last 18 years, that are reshaping Latinx literature — bound to live on as classics.

Structured like a play, this novella by a young Argentine novelist is mostly written in dialogue. Amanda, lying on a hospital gurney, tells the story of her illness to David, a young man sitting by her side and prodding her with questions about mysterious “worms” that seem to be both the key to Amanda’s affliction and, also, David’s strange disposition. “The tale that follows is a swift descent into phantasmagoria,” Jennifer Szalai wrote in The New York Times Book Review.

AT NIGHT WE WALK IN CIRCLES by Daniel Alarcón (2013)

Nelson is a young aspiring actor living in a war-torn, unnamed South American country who yearns to escape what he perceives to be a mediocre life. He gets his chance when he lands a starring role in a revival tour of the farcical play “The Idiot President,” in which he portrays the leader’s son and becomes increasingly consumed by the role. It is a “provocative study of the way war culture ensnares both participant and observer, the warping fascination of violence, and the disfiguring consequences of the roles we play in public,” our reviewer, Ana Menéndez, wrote. 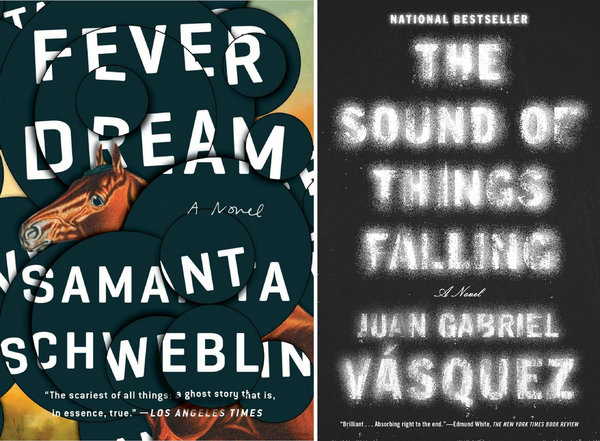 HER BODY AND OTHER PARTIES by Carmen Maria Machado (2017)

“It’s a wild thing, this book, covered in sequins and scales, blazing with the influence of fabulists from Angela Carter to Kelly Link and Helen Oyeyemi, and borrowing from science fiction, queer theory and horror,” our critic Parul Sehgal wrote in her review of this Cuban-American author’s recent short story volume. Each tale plays with genre and gender. In one, a woman recounts her sexual exploits as a seeming apocalypse unfolds around her. In another — the book’s centerpiece — Machado reimagines almost 300 episodes of “Law & Order: Special Victims Unit,” introducing doppelgängers and haunting spirits.

Díaz was a relative unknown when he was named a finalist for the Pulitzer Prize and the PEN/Faulkner Award for Fiction last year. His novel, released by the independent publisher Coffee House Press, tells the story of a young Swedish boy who tries to meet his brother in New York but ends up in San Francisco after boarding the wrong boat. The boy, Håkan, has to make his way East on foot, and goes up against the migration of the Gold Rush on the way. “Though many of its elements are familiar to the point of being worn out — saloons and wagon trains, Indians and gold prospectors — the novel is not,” Lawrence Downes wrote in a profile of Díaz for the Times.

THE SOUND OF THINGS FALLING by Juan Gabriel Vásquez (2013)

This “brilliant new novel rejects the vivid colors and mythical transformations of his older countryman’s Caribbean masterpiece,” our reviewer Edmund White said, referring to Vásquez’s aesthetic departure from García Márquez’s “One Hundred Years.” Instead, the author displays the “cold, bitter poetry of Bogotá and the hushed intensity of young married love.” The story follows Antonio, a young professor who befriends an older man, Laverde, who had been imprisoned for two decades. One night, while leaving the billiard where they met, they are shot at by two men passing by on a motorcycle. Laverde dies and Antonio, badly injured, becomes fixated on learning more about him.

THE BRIEF WONDROUS LIFE OF OSCAR WAO by Junot Díaz (2007)

Michiko Kakutani, a former book critic for the Times, once wrote that this Pulitzer Prize-winning novel was “so original it can only be described as Mario Vargas Llosa meets ‘Star Trek’ meets David Foster Wallace meets Kanye West.” Díaz’s prose is intellectual and hood, and he draws from Taíno folklore and Dominican history to tell the story of Oscar: a nerdy second-generation kid from New Jersey whose family is plagued by a fukú curse that followed them from Santo Domingo.

A note: This year, Díaz’s reputation was tainted by allegations of sexual assault made against him by another writer, Zinzi Clemmons. He denied the accusations and has stayed largely out of the public eye since, and earlier this month, the Pulitzer Prize board announced that following a five-month inquiry, they “did not find evidence warranting removal" of Mr. Díaz from the board.

I was conflicted over whether to include this title. But to deny the influence of Díaz’s work or the significance of the perspective from which he wrote seemed disingenuous. When I first read “Oscar Wao,” in high school, I blanched at the machismo in its pages — it was a vivid reminder of a culture of misogyny that irreparably damaged my childhood. But part of literature’s value is its ability to mirror real life, and one thing is for sure: This brand of sexism remains deeply and undeniably familiar.

I AM NOT YOUR PERFECT MEXICAN DAUGHTER by Erika L. Sánchez (2017)

Julia Reyes, a Mexican-American teen who is an aspiring writer and a smart mouth, is nothing like her older sister Olga, who appears “perfect” and devoted to their traditional parents. But when Olga is killed in a bus accident, Julia discovers that her sister may have been living a double life. “Part detective story, part coming-of-age tale, Sánchez’s novel doesn’t shy from heavy subject matter,” said our review. “Julia lives in a world where teenagers are no strangers to poverty, sexual assault, domestic violence and fear of deportation. And Julia’s relationship with her mother, who calls her a ‘huevona’ and a ‘malcriada' (bonus: readers get a crash course in Spanish insults) is a sticky stew of anger, love, guilt and resentment.”

This young adult novel, which won the National Book Award for Young People’s Literature this year, is about 15-year-old Dominican teen named Xiomara who struggles with the growing pains of adolescence: an unfamiliar body that attracts catcalling from boys and insults from girls, a strict mom who wants her to be a good church girl, and a school crush she has to keep secret. At first, Xiomara copes by getting into fights and privately pouring her frustrations into her poetry. Then, she is invited to join the school’s slam poetry club. In our reviewer Julie Fogliano’s words: “Acevedo’s powerful free verse manages to stay contained within the book’s covers. The force and intensity behind her words practically pushes them off the page, resulting in a verse novel that is felt as much as it is heard.”

Here are more stories to read this week.

THE MAKING OF A LITERARY HIT

In case you’re curious, here’s the story of how “One Hundred Years of Solitude” became a classic.

THINGS ARE SCARY AT THE BORDER

Border patrol agents fired tear gas at hundreds of migrants who tried to cross the United States-Mexico border on Sunday, and in a separate incident, a young Guatemalan woman was badly hurt when she tried to climb over a wall into the States.

SO, ABOUT FAMILY SEPARATION …

WHAT MIGRANTS ARE FLEEING

I was gutted by this story in the Intercept, about what happened when a young 22-year-old man tried to retire from gang life after 10 years. “Kids like Benjamin try to leave their gangs by hiding in plain sight,” writes Danielle Mackey. But “the process is like burrowing through a boulder with a screwdriver. Exhausting. Seemingly impossible. You sweat it out alone.”

Remember your friends who said they would leave the U.S. if Trump won? Well, these Latinx Jews are actually doing it, and they have their sights set on Spain.

Call me biased, but our pop culture reporter Reggie Ugwu’s writing is about as devastatingly beautiful as Barry Jenkins’s filmography; his oral history of how Jenkins’s first film, “Medicine for Melancholy,” influenced black auteurs like Lena Waithe (“The Chi”) and Terence Lance (“Random Acts of Flyness”) is a must-read.

Do you have suggestions for El Espace? Want to receive it as a newsletter? Let us know: [email protected]