Zanele Muholi’s face is luminous — and framed by a headdress of inflated latex gloves. The image is typical of the Johannesburg-based photographer’s theatrical self-portraits, where hairstyles, headgear and objects as diverse as a majestic necklace of cowrie shells or a wooden stool worn as a hat or crown suggest multiple personas and layers of historic, cultural and political meaning.

As Muholi has said, you might look at the latex gloves, “and think of balloons and play, rather than the constraints of work and domesticity or the need to breathe, to feel deflated.” Characteristic of Muholi’s work, that photograph is about all of these things, and much more.

The image is one of more than 90 self-portraits in “Zanele Muholi: Somnyama Ngonyama, Hail the Dark Lioness” (Aperture), a monograph accompanying a traveling exhibition organized by Renée Mussai for Autograph ABP in London and now at the Spelman College Museum of Fine Art in Atlanta through Dec. 8. In addition to photographs, the book contains essays, criticism and poems by more than 20 curators, art historians and writers.

The self-portraits function on various levels and pay homage to the history of black women in Africa and beyond, the dark lionesses of the book’s title. They reimagine black identity in ways that are largely personal but inevitably political. And they challenge the stereotypes and oppressive standards of beauty that often ignore people of color. “All this stereotyping inspires a deep-seated hatred of the black body, from head to toe: eyes, lips, everything, your features,” said Muholi in a recent interview with Ms. Mussai 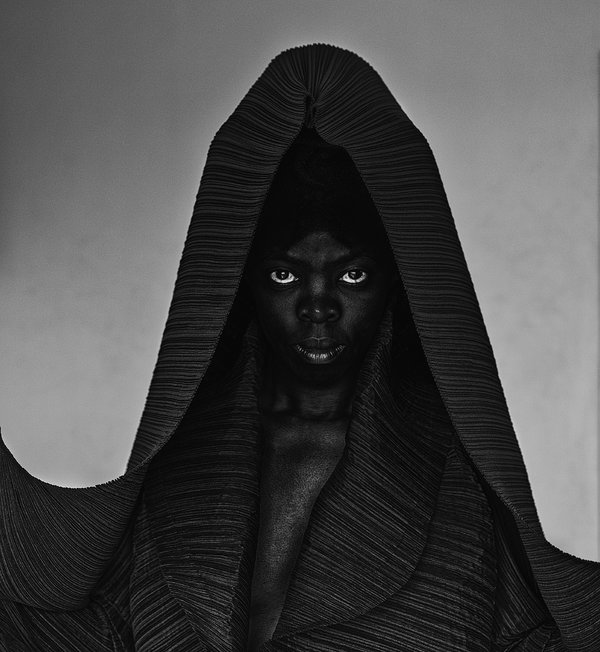 Muholi, who eschews gender-specific pronouns, is co-founder of the Forum for the Empowerment of Women, which advocates for the rights of black lesbians in South Africa, as well as the founder of Inkanyiso, a collective for queer activism and visual media. Activism is central to Muholi’s photographs, work that taps into the tradition of empowerment through black self-representation. Since the 19th century, the photographic portrait has allowed black people to represent themselves as they want to be seen, not how others pigeonhole or even dismiss them.

“I wanted to use my face so that people will always remember just how important our black faces are, when confronted by them,” said Muholi, who prefers to be called a “visual activist” rather than an artist. “For this black face to be recognized as belonging to a sensible, thinking being in their own right.”

Muholi’s portraits inspire by example, self-discovery and resistance. They build on earlier series devoted to visual activism, such as “Faces and Phases,” “Innovative Women” and “Transfigures,” which documented black lesbian, gay, bisexual, transgender and intersex South Africans, in response to the persecution, violence and invisibility they endured.

“Too often I find we are being mimicked, and distorted, by the privileged other,” said Muholi. “We are here; we have our own voices; we have our own lives.” In this regard, the photographer wants to “teach people about our history, to rethink what history is all about, to reclaim it for ourselves, to encourage people to use artistic tools such as cameras as weapons to fight back.” Those words echo Gordon Parks, who more than a half-century ago called the camera his “weapon of choice” against racism, poverty and injustice.

Using richly symbolic poses, props and situations, Muholi’s self-portraits represent African identity as nuanced and incongruous — from a stoic figure engulfed by a snakelike vacuum-cleaner hose to a series of pictures dedicated to Muholi’s late sister, Basizeni, images that serve both as elegies and as “conversations with the legion of ‘ancestral slaves,’” as Ms. Mussai wrote.

Among the most poignant images in “Somnyama Ngonyama” are those honoring the photographer’s late mother, Bester Muholi. In several pictures, Muholi wears headdresses composed of scouring pads or clothespins that allude to Bester’s work as a domestic. These images push the envelope of traditional portraiture, serving as respectful homage, pointed satire and thoughtful commentary on a difficult life made worse by apartheid.

“Bester’s headdress appears like a costume that undermines the pretensions of portraiture,” the art historian Tamar Garb wrote in the book. “But it also asserts the defining role that she played in an economy of subservience and spectacle. The figure is framed by her labor, haunted by pictorial precedents, captured by the gaze of her desiring daughter, for whom the love of mother was always shared, never enough, gone too soon.”

When posting images online, Muholi often uses the hashtag #blackbeauty, an affirmation of how the artist is taking control of an attribute too often defined and represented by outsiders. Muholi implores viewers, like the liberated lioness of “Somnyama Ngonyama,” to question and free themselves from oppressive aesthetics.

“How is black beauty defined? It changes over time, and it always seems fit in with the other’s consumption,” said Muholi. “My point is that black people should question this idea themselves.”

Muholi hopes that “Somnyama Ngonyama” will motivate black people facing racism, sexism and homophobia in Africa and beyond to resist and transcend the cultural limitations imposed on them.

Race Stories is a continuing exploration of the relationship between race and photographic depictions of race by Maurice Berger. He is a research professor and chief curator at the Center for Art, Design and Visual Culture at the University of Maryland, Baltimore County.