THE BISEXUAL on Hulu. Desiree Akhavan thinks that her show’s title will turn off a lot of viewers. “I want to know why that is, and to stand by it,” she recently told The New York Times. “I know that I’m playing the long game and I want you to watch this thing and be like ‘Oh, it’s not what I thought it would be.’” Following her exploration earlier this year of anti-gay “conversion therapy” in “The Miseducation of Cameron Post” (a film for which she was director and a writer), Akhavan’s debut TV show tells a coming-out story from the perspective of Leila, an Iranian-American woman in London played by Akhavan. After moving out of a flat she shared with her longtime girlfriend (Maxine Peake), Leila gains a new flatmate — Gabe (Brian Gleeson), a Straight White Man (capital letters warranted). She also for the first time wants to date men. 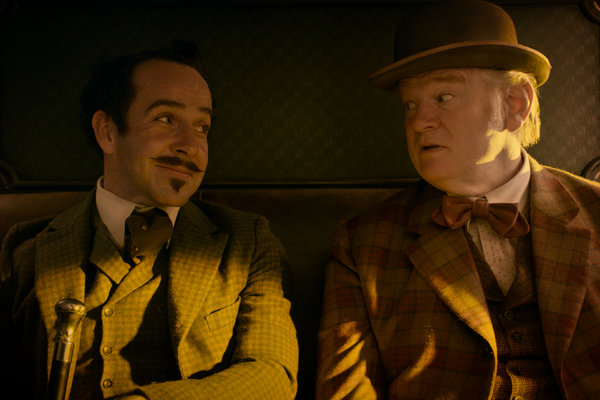 THE BALLAD OF BUSTER SCRUGGS (2018) on Netflix. While Brian Gleeson grapples with toxic masculinity in “The Bisexual” on Hulu, his father, Brendan Gleeson, plays a bounty hunter with manners on Netflix in one episode of Joel and Ethan Coen’s Western anthology film. The film’s six chapters bring together a posse of big actors. Along with Gleeson, there’s Zoe Kazan playing a young woman traveling the Oregon Trail; Liam Neeson playing an aging impresario; Tom Waits as a prospector; and Tim Blake Nelson as Buster, a killer with a guitar. “‘The Ballad of Buster Scruggs’ is one of the darkest movies by Joel and Ethan Coen, and also among the silliest,” A.O. Scott wrote in his review for The Times. “It swerves from goofy to ghastly so deftly and so often that you can’t always tell which is which.” For a Coen marathon, watch this alongside FARGO (1996), airing at 5:30 p.m. on HBO Signature.

KUNG FU PANDA: THE PAWS OF DESTINY on Amazon Prime. The second “Kung Fu Panda” TV show (after “Kung Fu Panda: Legends of Awesomeness”) expands the franchise started by a 2008 film starring Jack Black (or, rather, his voice). While Black isn’t featured here, his character is. Voice acting duties for Po are handled by Mark Wingert; in the new series, set after “Kung Fu Panda 3,” a group of children are trained by Po, in preparation for saving the world.

RISING (2018) 7:45 p.m. on Showtime. In recent years, the Advertising Council has fought to stay with the times by incorporating emoji in its campaigns or creating social media accounts for Smokey Bear. Its new short, with David Nutter (“Game of Thrones”) as director and Lena Waithe (“Master of None” and “The Chi”) as a writer, is also timely: It focuses on an American neighborhood in the wake of a natural disaster, following a Muslim family facing threats both from the crisis and from bias.