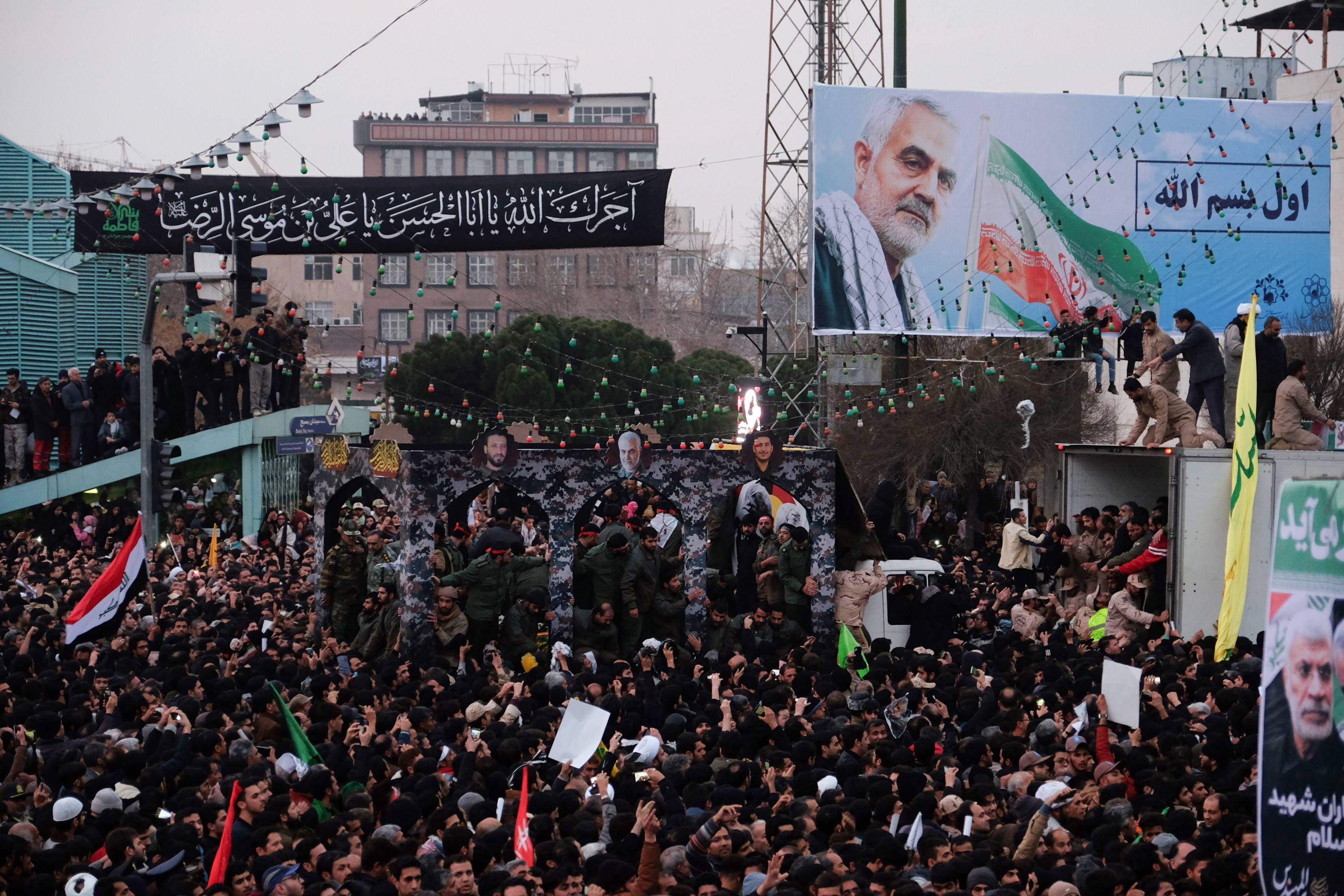 Iranians gather around a vehicle carrying the coffins of slain major general Qassem Soleimani and others on Sunday.

The US military said it’s putting its fight against ISIS on pause as it faces new threats from Iran as well as pushback from Iraqi officials against its “assassination” of a top Iranian leader.

A statement from the US-led coalition fighting ISIS on Sunday cited the recent attacks by an Iran-backed militia that left Iraqi security forces and an American civilian dead.

“Our first priority is protecting all Coalition personnel,” the statement said, adding that training and support operations in the fight against ISIS would be paused.

ISIS has terrorized the region for years, as well as inspiring deadly attacks in the US and around the world. Though President Trump in October claimed the group had been “defeated 100%,” he later walked back that statement as Republicans and Democrats stressed the need to continue military operations against ISIS fighters who had found safe haven in remote parts of Iraq.

Sunday’s announcement of a US military pause came the same day as new threats from Iran of retribution against the US for its killing of Gen. Qassem Soleimani, a top Iranian military commander who directed bloody conflicts around the Middle East, in a drone strike near the Baghdad airport. In an interview with CNN, the military adviser to Iran’s supreme leader promised Iran would take direct action against US military sites.

“It was America that has started the war. Therefore, they should accept appropriate reactions to their actions,” Maj. Gen. Hossein Dehghan told CNN.

Trump responded in a tweet, announcing to Congress that if Iran did strike, the US would strike back again — potentially harder. (Under US law, the president must notify Congress of any armed military action within 48 hours if Congress hasn’t already authorized it. That notification has never before been made by a tweet.)

Large crowds of Iranians gathered on Sunday as Soleimani’s remains traveled to his final resting place. Aerial footage showed tens of thousands of people flooding streets, prompting estimates that it was the largest gathering of Iranians in years.

But as US forces moved to defend against Iranian retribution, the Iraqi parliament said it wants the US and other foreign nations fighting against ISIS to leave the country altogether.

A vote on Sunday approved a resolution seeking to end the presence of foreign troops in Iraq. The vote isn’t binding on the Iraqi government, but outgoing Prime Minister Adel Abdul-Mahdi voiced his support, the Associated Press reported.

He also described the killing of Soleimani, which was ordered by President Donald Trump, as a “political assassination.” The bombing was also denounced on Sunday by Iraq’s foreign ministry, which submitted complaints to the United Nations for a “serious violation” of Iraqi sovereignty.

“Iraq called on the Security Council to condemn the bombing and assassinations,” a Ministry of Foreign Affairs statement said.

Iran’s state TV also reported on Sunday that its government would no longer uphold limits on its enriched uranium stockpile and other nuclear development outlined by a 2015 international deal.

In interviews Sunday morning, US Secretary of State Mike Pompeo downplayed the outrage from Iraqi officials as well as the impact of potential Iranian retaliation.

“We are confident that the Iraqi people want the United States to continue to be there to fight the counterterror campaign, and we’ll continue to do all the things we need to do to keep America safe,” Pompeo told Fox News Sunday.

On NBC’s Meet the Press, Pompeo also faced questions of whether the killing of Soleimani had made Americans safer, given the threats of retaliation by Iran. Pompeo said he was certain the US was safer, in spite of potential future attacks.

“It may be that there’s a little noise here in the interim, that the Iranians make a choice to respond,” he said. “I hope that they don’t. President Trump has made clear what we will do in response if they do, that our response will be decisive and vigorous, just as it has been so far.”