HuffPost spoke with Michelle, the 20-year-old Australian behind the account who only uses her first name online, about her latest highly successful video, which shows Harry fixing Meghan’s ponytail or smoothing out her hair at various events.

“The most attentive husband,” the tweet text says, alongside a 24-second video that shows the couple in Morocco in February 2019, Nyanga township in Cape Town in 2019, New Zealand in 2018, and Meghan launching her cookbook at the Hubb Community Kitchen in September 2018. 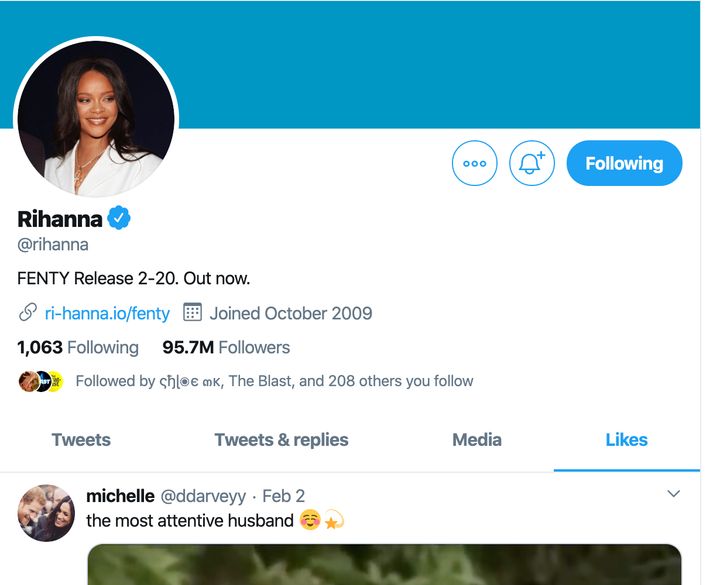 Michelle told HuffPost that she was a fan of Meghan “long before she met Prince Harry.” The more she learned about the actor, the more she liked her, she said.

“I came to see the genuine and kindhearted person she is. I was specifically impressed with all that she has achieved throughout her life and all the humanitarian work she has dedicated herself [to],” Michelle said via direct message on Feb. 5. “She was (and still is) somebody who really cares about not only the work she completes, but also the people who follow it.”

But even with her acting and involvement in many charities, Meghan still found time to interact with fans, helping to spur an online community of supporters that grew stronger as Meghan’s celebrity soared.

“Back when she had her own personal social media, she would constantly interact with her followers and even had built relationships with a few of them,” Michelle said.

One of Michelle’s other extremely successful videos is from one from a 2016 AOL Build talk. During the interview, Meghan notices and gives a letter to a fan, Emily, whom she’d built a relationship with on Twitter. (AOL was HuffPost’s parent company at the time).

“Don’t forget Meghan did this,” Michelle tweeted in January 2020 alongside a clip of the interaction, garnering 9 million views and 443,000 likes. “This is the kind of person she is.”

Michelle is part of the SussexSquad community, the ever-growing group of online defenders speaking up on behalf of the Sussexes. Meghan especially has been the frequent target of racist coverage and online abuse by the British tabloid press and on Twitter, which is roundly regarded as a hotbed of hate.

Though Meghan couldn’t ― and didn’t ― hit back at trolls or tabloids directly as a working member of the royal family, her SussexSquad supporters gave the duchess a voice and defended her in real time.

Michelle follows 158 accounts on Twitter, the majority of which prominently support the royal couple. She says her account is a “way for me to connect with other individuals who also share similar interests” and celebrate major Harry and Meghan events ― like the royal wedding and their son Archie’s birth.

Michelle told HuffPost that she creates content for her account whenever she gets “a sudden spark of creativity, or notice something from their engagements that is consistent” and wants to share it with people.

“When you follow each of their engagements, it’s not that hard to see the love and positivity they spread which makes coming up with content easy,” she said. “There is a lot of negative and unfair press against them, specifically Meghan, which is a shame and really disappointing.”

The creator said that she never intends for her work to go viral, but when it does, it’s “very overwhelming.”

“But I enjoy it because it helps spread the love and word on Harry and Meghan,” she said, adding that the SussexSquad always has a positive reaction to the content and that the “overwhelming majority” of comments she gets are positive.

In addition to posting cute moments or interactions between the couple, Michelle also uses her platform to highlight Meghan’s past humanitarian work.

“I made a thread on Twitter once highlighting Meghan’s pre-royal life achievements and that was a post that did get a lot of love,” Michelle wrote.

Meghan’s activism got started at a young age ― at only 11, she got Proctor & Gamble to change its sexist advertising through a letter-writing campaign. During her time on “Suits,” she served as the global ambassador for World Vision, where she led clean water, sanitation and gender equality initiatives in Rwanda and India. She also worked as a U.N. Women’s Advocate, volunteered at a Toronto nonprofit for many years to help the homeless and joined a USO tour appearance in 2014.

“I had one person comment on it about how she knew Meghan was politically active and philanthropic but she had no idea it was this prolific,” Michelle said.

But Michelle ― and the rest of the SussexSquad ― have also used their social media accounts to make a tangible impact on the world. Michelle highlighted a few campaigns she’s promoted with fellow accounts that have really taken off.

“We’ve had a #HappyFathersDayPrinceHarry which raised over $10,000 for two charities supported by Harry, including Scotty’s Little Soldiers and the Queen’s Commonwealth Trust,” Michelle said, adding that the group’s #GlobalSussexBabyShower push after Archie was born in May 2019 raised over $100,000 for various organizations.

Currently, the online community is running the hashtag campaign #SussexGreatForest, which aims to plant 100,000 trees by Archie’s first birthday.

“Harry and Meghan really inspire us to participate and help support good causes and I think that’s really important for people who have such a large platform,” she said.