Sonoko Sakai opened the door to her house, set on a slope in Highland Park, in Los Angeles, and the scent of cardamom and cloves, fennel and cumin, cinnamon and ginger rushed out to greet me. On the dining table, just behind her, she had more than a dozen jars of spices set up for a cooking class. “Did you bring an apron?” Sakai asked. “You’re going to need an apron.” She pointed to brown mustard and coriander seeds, black peppercorns and sweet paprika and marigold-colored turmeric. “You know, we don’t really come from a culture of too many spices,” Sakai said, “but every week in Japan, we eat curry. We get tired of ramen, we get tired of sushi, but we never, ever get tired of curry.”

Kare raisu, or curry and rice, is the stuff of Japanese school lunches and quick weeknight dinners. It’s comfort food, and often the first cooking lesson for Japanese children in their home-economics classes. To make it, cooks reach for a pack of their favorite store-bought curry bricks — concentrated cubes of spices with some kind of thickening agent, like flour, which create thick, dark, spicy sauces when simmered with water or stock, infusing chopped meat and vegetables with flavor as they simmer. These bricks are cheap to buy and easy to use — they keep at room temperature and pop out of their packs like oversize pills. 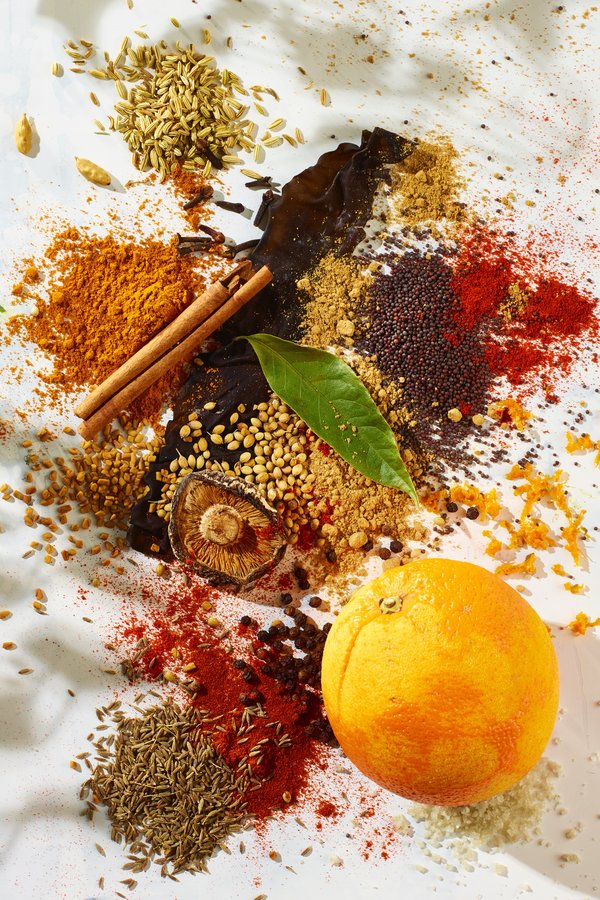 Curry traveled the world through colonization, via the British, who brought their ideas of Indian cuisine to Japan in the late-19th century. Curry didn’t really refer to one dish, or a single, precise set of flavors and textures, but functioned more as a kind of catchall for a multiplicity of Indian foods embellished with spices. “Curry was very exotic at one point,” Sakai said. Japanese cooks considered it Western fare and set to work adapting it to their own tastes and making it their own. What defines a Japanese curry now, Sakai said, is a fairly high level of umami (often from the addition of Japanese ingredients like shiitake mushrooms, kombu or miso). And in Japan, the sauce is traditionally made using the French technique of diluting a roux — a mix of cooked fat and flour — with a liquid, which thickens as it boils. “But you can control everything if you make it yourself,” said Sakai, who constantly tweaks her brick recipe, adding dehydrated citrus peel and homemade miso, or softening the heat of chiles with extra kombu. As a cookbook author and tinkerer who makes her own miso and buckwheat noodles, Sakai has been making her own curry bricks from scratch for a few years. She included a recipe in her latest cookbook, “Japanese Home Cooking: Simple Meals, Authentic Flavors,” and her homemade-curry-brick class is popular in Los Angeles, filled with students from all over the world with a taste for kare raisu.

By late afternoon, a dozen students gathered under the dappled shade of a grapefruit tree in Sakai’s backyard to see how it was done. “Who would have thought we’d be doing this in a Japanese kitchen?” Sakai said, shaking a cast-iron pan of spices over a camping stove and instructing her students to do the same. In groups, they plugged in a few coffee grinders and reduced those whole toasted spices to a fine powder. The second step, making the roux, took a little longer but emphasized the genius of the curry brick, which is putting in the work ahead of time, so that a curry comes together in a flash. Then at dinnertime, you can sauté some chicken and vegetables, add a few cups of stock and a curry brick and let the pot simmer together slowly. Dinner is ready. The finished curry has a smooth, silky texture, thanks to the roux, and the mellow heat of fresh, toasted spices.

In Sakai’s yard, students stood over their pots, chatting about their favorite Japanese curry houses in Los Angeles, stirring mixtures of butter and flour. After about 15 minutes, when the slurry started to color just slightly, turning a light gold, the students tipped in their ground spices, and the mixture was ready, like a thick, shining cream, filling the air with the scent of clove oil and cumin. They poured the curry concentrate into molds, and in the fridge, as the butter solidified, the bricks set firm, each brick a compact, travel-friendly, quick homemade curry, ready to go.