Garry Kasparov, one of history’s greatest chess players, doesn’t think much of most onscreen chess scenes. “You can see that chess is being used unprofessionally,” Kasparov said, speaking on a fuzzy telephone line from Croatia. “Very often, the positions are not making much sense.”

Chess, a sport in which two people, usually men, sit opposite each other and barely speak or move, sometimes for hours, seems an unlikely screen star. But chess has fascinated film since the silent era, infiltrating thrillers, romances, comedies, biofilms, documentaries, classy literary adaptations and cartoons. Few other pastimes have inspired both Ingmar Bergman (“The Seventh Seal”) and Pixar (“Geri’s Game”). On television, chess has guest-starred on “Columbo,” “Star Trek,” even “Friends.”

Which makes “The Queen’s Gambit,” a seven-episode limited series that premieres on Netflix Oct. 23, both familiar and unusual. A glamorous and wrenching view of chess, set in the 1950s and ’60s, it centers on the fictional character Beth Harmon (first Isla Johnston, then Anya Taylor-Joy), a child prodigy who discovers the game in a Kentucky orphanage. Despite punishing addictions to alcohol and tranquilizers, Beth, clad in Gabriele Binder’s elegant period costumes, plays and trains obsessively, rising through the rankings until she faces the world’s best. Which makes her something like the thinking woman’s Rocky.

With its troubled protagonists and climactic matches, “The Queen’s Gambit” resembles other chess dramas. Its focus on a woman has precedent, chiefly Mira Nair’s “Queen of Katwe,” which Kasparov recommends. But when it comes to chess positions — the particular arrangement of pieces on the board — no other work rivals this one in terms of both number and painstaking accuracy.

“It is as close as possible to the authentic atmosphere of chess tournaments,” said Kasparov, who consulted on the series. 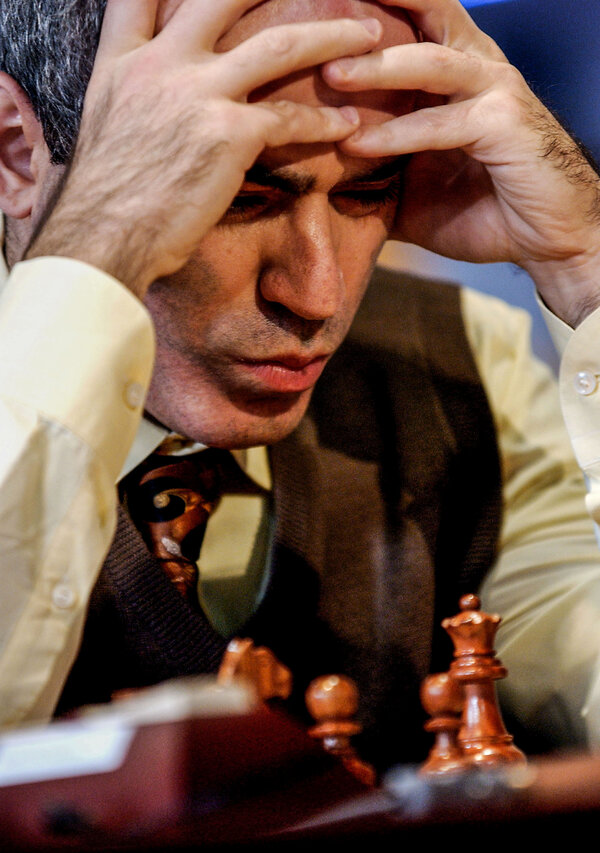 It’s also exceedingly faithful to its source material, a slender 1983 novel written by Walter Tevis, an author with a knack for books that Hollywood wanted: “The Hustler,” “The Color of Money,” “The Man Who Fell to Earth.” Tevis, a respectable club player, could delight even non-players with chess’s rhythms and language: the Sicilian Defense the Semi-Slav Variation, the Falkbeer Counter Gambit, the Ruy Lopez. The book borrows its name from an opening move in play since the 15th century.

In the early 1990s, the screenwriter Allan Scott (“Don’t Look Now”) acquired the rights to the novel and wrote a film script. The director Michael Apted expressed interest, as did Bernardo Bertolucci. Molly Ringwald was likely to star. In 2008, Heath Ledger, a chess enthusiast, signed on to direct, with Ellen Page as Beth.

Then Ledger died of a prescription drug overdose before preproduction began. The project stalled.

“It was a very tough movie to get made,” William Horberg, a producer long involved with the property, said.

But it didn’t have to be a movie. A few years ago, the writer and director Scott Frank, who had read the book in the ’90s, took an interest. Having written and directed “Godless,” a feature script that evolved into an Emmy-winning limited series for Netflix, Frank thought that “The Queen’s Gambit” could be redeveloped in a similar fashion. Netflix agreed.

Which may have been a risk. The novel is brief. Dialogue is spare and the action beyond the gameboard minimal. But Frank, who created the series with Scott, wanted the space to fill in histories and themes that the novel elided.

“If you did it as a movie, it becomes a sports movie: ‘Is she going to beat the Russian guy?’” Frank said. “And that’s not what the book is about. For me, it’s about the pain and cost of being so gifted.”

He wrote six episodes, then realized he needed seven. Why? “Chess takes time,” he said.

It certainly can. In 2018, the first game of the championship match at the world chess championship lasted as long as the series. (It ended in a draw.) So that became Scott’s challenge: how much chess to show, how much time to give it. Too much time spent on the games and you risked alienating non-players. Too little and you lost the sports underdog story that gives the series its shape. “The Queen’s Gambit” may be more than just a sports story — with extremely chic uniforms — but that remains its deep structure.

Before production began, Frank hosted what he called a “chess summit.” In Berlin, where Frank would shoot the series, he and the editor Michelle Tesoro met with chess experts to try and learn as much as they could about the look and feel and even the smell of chess tournaments. They quizzed experts on the style of the pieces, the thickness of the board, the arrangement of tables and audience.

The celebrated chess coach Bruce Pandolfini, who had advised Tevis on the novel, created a bible of games and positions for the series, signifying key moments in Harmon’s play. He tried for moves with symbolic heft, like an exchange of pawns or a queen sacrifice. Kasparov inspected these positions and also designed the moves for the most significant games.

Kasparov also gave the production some tips about tournament play, even as he doubted that any series could reflect the real atmosphere of a chess competition with complete accuracy.

Very few of the actors were chess enthusiasts. So Pandolfini coached them on how to look like players — how to hold the pieces, when to hit the chess clock. Even viewers who didn’t know chess might pick up on false gestures, Pandolfini reasoned.

Actors had to learn move after move in sequence, so Pandolfini developed mnemonics and visual cues to help them. “When it came to the actual chess sequences, my background as a dancer really helped,” Taylor-Joy said. “It’s basically just choreography with your fingers.”

Conveying Beth’s complicated inner life while sliding a queen’s pawn forward wasn’t a problem for her. “Her deep passion for chess is the passion that I have for my art,” Taylor-Joy said. “It felt easy to transfer the emotion.”

“The Queen’s Gambit” includes more than 300 games, some glimpsed only in the foreground or background. To keep each match and each tournament from blending entirely into the next, the production designer, Uli Hanisch, developed unique color palettes to distinguish one locale from another. Steven Meizler, the cinematographer, varied the angles. The sounds the pieces make against the board change, as do the rhythms — from allegro to adagio.

No traditional match plays out fully from start to finish. (A few speed chess sequences come close.) Typically, the camera captures only a few moves. Novice viewers rely on sportscasters or whispers among the audience or the gestures of the characters — drummed fingers, blinked eyes, pursed lips — to understand the dynamics and stakes.

For Beth, abandoned first by her birth parents and then by her adoptive family, the stakes tower. Only while playing does she feel a sense of purpose and belonging. In a later episode, Beth overhears some Russian champs discussing her. “She’s like us,” a grandmaster says. “Losing is not an option for her.” (This was dialogue Kasparov suggested.)

Beth struggles with her addictions, believing that tranquilizers enhance her play. The accuracy that defines the chess scenes perhaps falters here — could someone play excellent chess while doped? “I can’t tell you I’ve ever heard of a chess player performing on Valium,” said Jennifer Shahade, a two-time United States Women’s Champion.

Pandolfini’s response: “This is entertainment.”

Whether a woman could play this well ever, on or off tranquilizers, has been a source of debate since the novel was released. One Times reviewer wondered whether women had the “extreme aggressiveness” required. Another doubted that women lacked the “physical stamina.” Those views didn’t end in 1983.

At chess camp, Shahade remembered, a visiting lecturer told the girls that women lacked the I.Q. Shahade sees the lack of great women players as more of a social one: Women don’t see other women playing so they don’t take up the game themselves.

“Girls have other interests,” Kasparov said, when asked why so few women play.

Tevis doesn’t seem to have based Harmon on any particular woman. It took another two decades after his novel was published before a female player, the Hungarian grandmaster Judit Polgar, broke through to the Top 10 in 2005. “She could beat anyone,” said Kasparov, who dropped a game to her in 2002, the first time a female player had bested the world’s top player.

Beth has an intuitive style, similar in glancing ways to that of the current world champion, Magnus Carlsen. She also plays with unusual aggression. If she resembles any player, it’s probably Bobby Fischer, the American world champion who struggled with severe psychological problems.

Are many women in chess troubled? “Oh God no,” Shahade said. “They’re very adaptable and strong.” But this, as Pandolfini said, is entertainment, and the prospect of a sports story about an athlete, even a mental athlete, who starts strong and stays that way might not compel.

Some chess dramas show the game as destructive, a pursuit that deranges its disciples. Others portray chess as liberating, redemptive, a lifesaver in 64 squares. “The Queen’s Gambit” has it both ways, although it ultimately argues for chess as Beth’s deliverance, which Kasparov likes. “It helps to remove the stain on the name of chess, that it turns people crazy,” he said.

Could Kasparov identify with a troubled, brilliant, awfully improbable character like Beth? He could. “Chess is her language, she lives for the game,” he said. “And that’s how I played.”