“The Prom” begins when a theater critic for The New York Times writes a pan so poisonous that the show he’s reviewing dies on the spot.

That’s ridiculous. It could never happen.

At any rate, it won’t happen now, because “The Prom,” which opened on Thursday at the Longacre Theater, is such a joyful hoot. With its kinetic dancing, broad mugging and belty anthems, it makes you believe in musical comedy again.

These days, that takes some doing. How, after all, with so much pain in the air and so many constraints on what’s allowed to be funny, do we find the heart and permission to laugh?

As in many classic musicals, the authors of “The Prom” begin by holding a distorting mirror up to the theater itself. The show shut down by the horrible critic is a bio-musical about Eleanor Roosevelt that naturally features a hip-hop number. Its stars, Dee Dee Allen and Barry Glickman, are narcissistic gasbags who mistake their exhibitionism for humanitarianism.

Career rehabilitation for widely mocked middle-aged divas is no easy matter. How can Dee Dee (Beth Leavel) and Barry (Brooks Ashmanskas) “appear to be decent human beings” without giving up a shred of self-love?

Their friends aren’t in much of a position to answer. Angie (Angie Schworer) has been stuck in the chorus of “Chicago” for 20 years. Trent (Christopher Sieber) is a superannuated cater-waiter who can’t stop reminding everyone that he went to Juilliard and had a flicker of fame in a ’90s sitcom called “Talk to the Hand.” 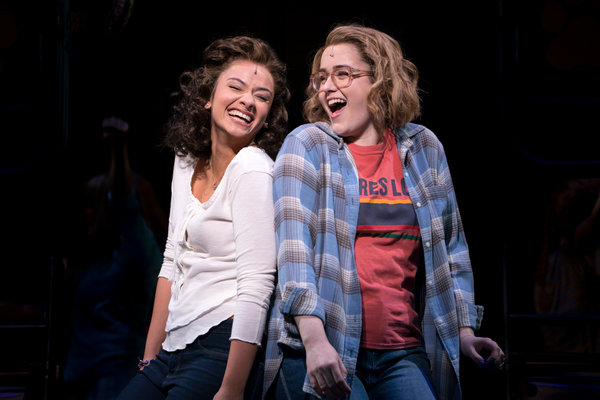 Still, they come up with the solution: celebrity activism.

It would be enough for a show like this to maintain a cruising altitude of giddy. The authors — book by Bob Martin and Chad Beguelin, songs by Mr. Beguelin (lyrics) and Matthew Sklar (music) — have on their combined résumés both “The Drowsy Chaperone,” that peerlessly inane 1920s showbiz spoof, and “The Wedding Singer,” an underrated musical comedy about an entertainer so humbled he winds up in a dumpster.

But working with the director-choreographer Casey Nicholaw, who staged “Chaperone” as well as the current “Aladdin” and “Mean Girls,” the team behind “The Prom” has attempted a more difficult gymnastic maneuver. As in many of the greatest Golden Age musicals, they latch onto a subject of topical importance, using its gravity to anchor their satire and their satire to leaven its earnestness. In full “Hairspray” mode, they mostly succeed.

[What’s new onstage and off: Sign up for our Theater Update newsletter]

The subject in this case is heartland homophobia. A quick Twitter search leads Dee Dee and Barry to the perfect object for their insincere concern: a 17-year-old lesbian whose high school won’t let her bring a girl to the prom. (The theater executive Jack Viertel came up with the idea after reading about several similar cases, including one in Mississippi in 2010.) Dragging along their exasperated press agent, the four vain actors hitch a ride to Indiana with a bus-and-truck tour of “Godspell,” hoping to rekindle their careers by wowing the “Jesus jumping losers and their inbred wives” into submission.

“We’re gonna help that little lesbian,” Barry sings, “whether she likes it or not.”

Like segregation in “Hairspray” — or, for that matter, racism in “South Pacific” — anti-gay intolerance offers a comfortable target and a teachable moment. Sincerity can be dangerous for comedies, though, burning away laughs and landing everyone in a lake of treacle.

If that problem is mostly avoided here, it is at a slight cost to depth and texture. Emma, the girl at the center of the storm, turns out to be a perfectly adjusted young woman with no satirical qualities except in her wardrobe. (The hilarious costumes are by Ann Roth and Matthew Pachtman.) Though smartly played by Caitlin Kinnunen, and provided with intolerant parents we never meet, the character as written is something of a blank.

That seems strategic to me. The lovely romantic ballads Emma is given to sing, with titles like “Dance With You” and “Unruly Heart,” are completely anodyne — or would be if it weren’t for the context, which turns them into breakthroughs.

But the other Indianans are blurrier, as if the authors couldn’t quite decide how much ribbing they could take. The local teenagers might as well be from “Bye Bye Birdie” — and they evolve from antagonists to allies with the scantest provocation. Even the school principal (Michael Potts) turns out to be unflappably noble; more surprising, as Dee Dee discovers, he’s a fan of hers and yet straight.

That leaves as the show’s only villain that fallback monster, the overworked single mother. Mrs. Greene (Courtenay Collins) isn’t even allowed a first name. She leads the P.T.A., knows very little about her own daughter (Isabelle McCalla, lovely) and, perhaps most damningly, shops at Dress Barn.

Other than that, the comic focus is squarely on the interfering, elitist New Yorkers, and here “The Prom” excels. Ms. Leavel is, as always, scarily brilliant at portraying self-involvement and making that passion big enough to justify belting about it. As the title character in “The Drowsy Chaperone” she had but one showstopper, which won her a Tony Award; here she has two.

Mr. Ashmanskas is likewise playing a variation on flamboyant characters he’s mastered before, but at such an extreme level as to leave mere earth behind. His auto-da-fey stylings — twinkle-toes pirouettes and pursed-lip mincing — ought to be offensive but somehow wind up as poetry instead.

I wish his big number (like the one given to the terrific Mr. Sieber) were a better song; despite Mr. Nicholaw’s ecstatic staging, it never quite lifts off. That is not a problem in general — the ensemble’s big numbers, set to Glen Kelly’s dance arrangements, are a blast. So is the textbook-perfect second-act opener, “Zazz,” in which Ms. Schworer, with her “crazy antelope legs,” gives Emma an unlikely lesson in Fosse-esque “style plus confidence.”

Those attributes, perhaps not as easily achievable as the song suggests, are part of what makes “The Prom” delicious despite its flaws. Moving so fast you can hardly see the cracks in the road, it consistently delivers on its entertainment promises as well as its Golden Age premise: that musicals, however zazzy, can address the deepest issues dividing us.

Like a certain cockeyed optimist, you may even note a lump in your throat when Emma finally gets her perfect kiss while the supportive Hoosiers and godless Broadway interlopers cheer her on and sing backup.

If that means that “The Prom” trades in some of the same cheesy mawkishness it satirizes, that’s O.K. Cheese has always been part of the American recipe — and rarely hurt the apple pie underneath.

When you purchase a ticket for an independently reviewed play or musical through our site, we earn an affiliate commission.