Dan is a teacher with zero classroom management skills who struggles with depression and often takes Xanax. Kev, his best friend, is an artist who has yet to sell a painting and is sleeping on Dan’s couch. Dan thinks Kevin is depressed, but Kevin won’t do anything about it.

Somehow it all ends up being … really funny.

Created by and starring Kevin Iso and Dan Perlman, the new 10-episode half-hour comedy “Flatbush Misdemeanors,” debuting Sunday on Showtime, has melancholic underpinnings that will be familiar to almost anyone who has ever been young and struggling in New York City. But as with several semi-autobiographical comedies before it (“Better Things,” “Louie,” “Ramy”), the show’s pensiveness is offset by an off-kilter humor that finds the weird in the funny moments of life and the funny in the weird moments.

Iso and Perlman, both of whom live in the Flatbush neighborhood of Brooklyn, are stand-up comics: Iso, 29, is Black and originally from Houston while Perlman, 31, is Jewish and grew up in Manhattan. They met at open mic nights around New York soon after Iso arrived. At the time, he was still adjusting.

“It took time to get used to taking the trains and getting lost,” Iso said. “And they don’t have Jewish people in the South, so that was different.”

The two hit it off, and in 2014, they started posting a series of sketches called Moderately Funny, on YouTube, before going on to create three episodes of the low (or no) budget web series “Flatbush Misdemeanors.” The series won awards at a few small film festivals and caught the attention of Showtime. (The webisodes have since been taken offline; Showtime has no immediate plans to make them widely available.)

Several stand-up friends, like Napoleon Emill and Kareem Green, came along from the web series to Showtime, but the new version is more polished, relying on professional camera crews and equipment instead of friends and borrowed gear. Kev’s art has graduated from being just a cut above stick figures to actual paintings. And Hassan Johnson, best known as the violent gangland enforcer Wee-Bey on “The Wire,” signed on to play the duo’s antagonist, Drew.

Johnson twists that intimidating “Wire” persona to comedic effect in “Flatbush Misdemeanors,” whether he’s pressuring Dan to give his niece good grades or pressuring Kev, who works in a Caribbean takeout joint, to give him free food. Resistance, it becomes clear, is futile. Turns out almost getting murdered can be funny, too.

“Their characters are so uncertain and never know what to do while Drew is the opposite and provides comedic balance,” said Johnson, who is originally from Staten Island.

“In real life, Dan and Kevin are like day and night, no pun intended,” he added. “Kevin is already over everything, while Dan will break everything down for you into bullet points.”

Iso and Perlman spoke by video on Monday about why their partnership is like a Reese’s Peanut Butter Cup, who they had to bribe to get their web series made, and how it felt handing over their baby to outside directors. These are edited excerpts from the conversation.

How did you end up working together?

DAN PERLMAN There are a lot of people where you say, “We should do something together,” and I’d send them something and they just wouldn’t send anything back. Kev was super funny, but he also was the first person I met who shared the same drive to make something.

KEVIN ISO We had similarities, the cadence and flow, the deadpan attitude and delivery. And we wanted to figure out how to do something that was not just the same, not all peanut butter and jelly, but peanut butter as part of a Reese’s — no one thought of that until they did, and then it was, “Oh man, this is delicious.”

PERLMAN We started making sketches in 2014 and made one a week for 17 weeks straight. A lot of them were bad. Then we homed in, and a couple of years later started making everything more narrative. 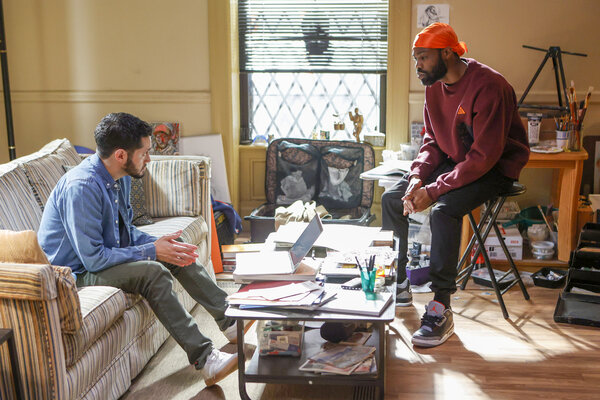 Once you started the “Flatbush Misdemeanors” webisodes, did you think it would become a half-hour television comedy?

PERLMAN To Kev’s credit, he always had confidence it would be a thing, but I wasn’t sure. We originally wrote the web series as a pilot, but it didn’t make sense to people we showed it to. So we cut anything that would need budget because we had none. Of the 35 pages, we shot 15, but we had to do it piecemeal — we’d shoot for one day, and then we couldn’t shoot for another three weeks because that was the next time we could borrow a camera.

How minimal was that budget?

PERLMAN The biggest expense in the first one was a couple of hundred to bribe a janitor to let us into a school in Queens on a Saturday. And then we had to reshoot anyway because the girl who played Zeyna had a school dance that day, and she was the one person we needed.

ISO Outside of the writing, the thing I’m most proud of, in terms of finessing some stuff, was in the second episode. We were filming in Brownsville and wanted to feature this mural, but we needed lights. My credit limit was $4,000. I went to B&H and bought lights for $3,500. Man, on the Monday after we filmed, I was there to return the lights saying: “Yo, here are the lights, man. Can I have my money back?”

What lessons did you learn from that project that helped with the Showtime version?

ISO You can see the flaws where we tried things that didn’t work. When we showed it in Montreal, the reaction was crazy. But I’m highly critical of myself, and I’m thinking, “OK I tried a joke there, and it didn’t get a laugh or it didn’t read well.” So we learned it’s better to have the show live in the moment than to try and knock something out of the park with a punchline.

How different is writing the series from creating your stand-up sets, and how much of that comedic mind-set translates to the show?

ISO I tried a joke from my set in the script, and it felt like I was trying to force feed something in there. It worked onstage but this is a different medium, so you go through it and you learn.

PERLMAN Stand-up helps you find your voice, it helps you figure out what you can make funny and what is interesting to you. And neither of us are trained or super experienced actors, but we have years of experience performing and staying within ourselves, understanding our personas and what we can make funny. That helped make the transition a little easier.

Did having a real budget and viewership create pressure, or are you just happy to be fulfilling your dream?

ISO I didn’t feel any pressure. It was more about approaching this version with the same goal in mind — to be authentic to this neighborhood and be honest for these people and represent them in a way that they deserve. One thing I’m extremely proud of in the show is we cast four or five people from the neighborhood, and we use artists from the neighborhood for the art inside the show. [Art by Pierre Jean-Baptiste and Carlon Thibou is featured in Drew’s apartment, and a mural by Madjeen Isaac appears in an exterior shot.]

PERLMAN The goal was not to make “The Dan and Kevin Show” but to make a comedy that felt lived in and had characters that were three dimensional, and not just existing as a plot device. You need characters that have their own wants and needs. The show is how I think of New York — a lot of different kinds of people coexisting, stepping on each other and bumping into each other while doing their own thing. And it’s the crisscrossing and intersections that make for conflict and comedy.

After doing everything yourself for so long, was it tough handing over the reins to directors for each episode?

ISO I wanted to do everything, man. I was trying to hold the boom mic.

PERLMAN It was definitely good to have outside perspective, the directors all brought something different.

ISO It was interesting to see how you could write something with one intention and then another person says, “I didn’t even see it that way.” It’s why people get so upset when they turn books into movies: “What have they done? It wasn’t like this in my head.”

Have you started planning for future seasons — thinking about what’s next for Dan and Kev or about how to expand the other characters?

ISO Who do you know, Stuart? Who have you been talking to about us getting future seasons?

PERLMAN They have a lot of lowercase w wins, so they can be more successful and have room to grow. But they’ll still be who they are. We’ve talked about the arc of each of these guys; I don’t think either will take over the world. Maybe they’ll find success in ways you don’t really expect and that they didn’t really expect. In building out this world, we have so much room to play without it having to be “Dan and Kevin meet somebody new this episode.” We would love to get more into the world of the secondary characters.

ISO We plan on ending it like “The Sopranos.” We’re just going to cut to black. That’s as far as we’ve gotten.

PERLMAN We’ll both be in the diner, but one of us will be working.