Every month, streaming services in Australia add a new batch of movies and TV shows to its library. Here are our picks for October.

When documentarian Kristen Johnson realized her father, Dick, was in declining mental and physical health, she proposed an idea: What if they prepared for his demise together, by filming a series of simulated deaths? The one-of-a-kind documentary “Dick Johnson Is Dead” combines those strange and sometimes beautiful scenes — which also include a funeral and some guesses at what the afterlife might be like — with wonderful footage of a lovable old man and his doting daughter, spending their last years together. This is a special film, turning an imminent loss into an occasion for reflection and joy.

Based on the popular podcast of the same name, “Song Exploder” invites well-known musicians to analyze their own work, breaking songs down track-by-track and line-by-line. The four-episode first season covers Alicia Keys’ “3 Hour Drive,” Ty Dolla $ign’s “L.A.,” R.E.M.’s “Losing My Religion,” and “Wait for It” from the Broadway hit “Hamilton.” In each half-hour installment, the host Hrishikesh Hirway talks to the artists about the choices they made, trying to clarify the mystery of creation by asking for a practical explanation of how music gets made.

A hit at the Sundance Film Festival earlier this year, the writer-director Radha Blank’s dramedy “The 40-Year-Old Version” also stars Blank as a struggling New York playwright, who reinvents herself as a rapper who rhymes about getting older. Shot in lovely black-and-white, this movie is witty and wise about the compromises some artists have to make to get their voices heard, and about the creative options available to those willing to risk failure and embarrassment.

‘The Haunting of Bly Manor’

“The Haunting of Bly Manor” is the writer-producer-director Mike Flanagan’s follow-up to his earlier Netflix horror series “The Haunting of Hill House.” Where the earlier show adapted and updated a Shirley Jackson novel, this new season is based loosely on the Henry James novella “The Turn of the Screw,” about a governess who sees ghosts. Some of Flanagan’s cast returns (including Henry Thomas, Oliver Jackson-Cohen and Kate Siegel), but the characters and the plot are entirely new. What won’t change: Flanagan’s command of quietly disturbing moods. 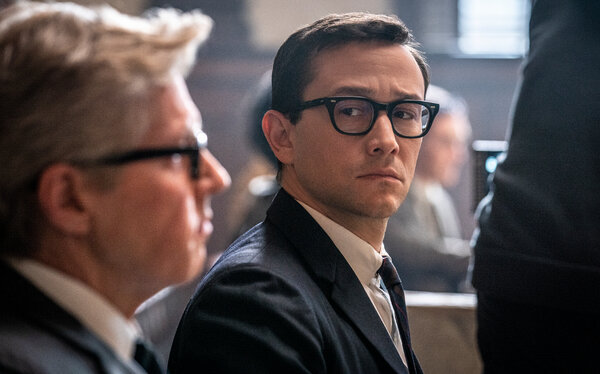 ‘The Trial of the Chicago 7’

The TV and movie writer-producer Aaron Sorkin — the man behind “The West Wing” and “A Few Good Men” — returns to the director’s chair for the film “The Trial of the Chicago 7,” a look back at the legal aftermath of the tumultuous 1968 Democratic National Convention. Sacha Baron Cohen plays the counterculture hero Abbie Hoffman, leading a cast that includes powerhouse actors like Michael Keaton, Frank Langella, Joseph Gordon-Levitt, Eddie Redmayne and Mark Rylance. Sorkin’s usual fast-paced dialogue and his willingness to plunge headlong into controversial material makes him a good match for this still-resonant story of dissidents forced to answer in court for acts of civil disobedience.

Daphne du Maurier’s 1938 Gothic novel “Rebecca” has already been adapted into a movie classic: the atmospheric and creepy 1940 Alfred Hitchcock version, which marked the director’s transition to Hollywood. Now another distinctive British filmmaker is tackling du Maurier’s book. Ben Wheatley, known for the edgy cult films “Kill List” and “High-Rise,” directs a stylish new version of “Rebecca” that emphasizes the glamour of the setting: the seaside estate of Manderley, where an emotionally distant aristocrat (played by Armie Hammer) deposits his naïve young bride (Lily James), leaving her to cope with his disapproving housekeeper (Kristin Scott Thomas) and the unsettling mystery of what really happened to his late first wife.

In the animated adventure “Over the Moon,” Cathy Ang is the voice of Fei Fei, a handy teenager who builds a rocket-ship and flies to the moon. Once there, she tries to impress the charismatic goddess Chang’e (Phillipa Soo) by embarking on a quest that involves a handful of nutty lunar creatures. Written by the late Audrey Wells and directed by the veteran Disney animator Glen Keane — with codirection by another Disney alum, John Kahrs — this is a colorful, energetic and emotional movie about a kid and an adult both dealing with personal heartbreak in their own unusual ways.

For his latest Netflix mini-series, the writer-director Scott Frank — who previously created the western “Godless” — adapts “The Queen’s Gambit,” a 1983 novel by Walter Tevis, the author of “The Hustler” and “The Man Who Fell to Earth.” Anya Taylor-Joy plays Beth Harmon, a top-rank chess master who pulled herself up from a miserable childhood thanks to her singular skills, but who struggles with addiction and self-doubt as an adult. The book is beloved, and Frank and Taylor-Joy are talented enough to give it the sensitive and lively TV version it deserves.

Riffing on both grim British police procedurals and dark-toned science-fiction, the sitcom “Code 404” has Daniel Mays playing a London detective who gets murdered during an undercover operation, and then brought back to life as an experimental cyborg. The charmingly irascible Stephen Graham plays the hero’s former partner, who isn’t so sure he wants to help his old buddy solve the mystery of his own death. Though craftily plotted and acted with real conviction, this offbeat crime series is brisker — and funnier — than the typical cops-and-killers fare.

In the 1970s and ’80s, the West Hollywood nightclub The Comedy Store became a launching pad for stand-up comics who would go on to dominate American pop culture for decades, including David Letterman, Jay Leno, Robin Williams, Jim Carrey, Roseanne Barr, Sam Kinison, Jimmie Walker, Jerry Seinfeld and more. The docu-series “The Comedy Store” looks back at the club’s fascinating history, considering how some of the most memorable comedy routines of all time were nurtured at a place where rivalries, disputes and drugs often made what was going on backstage as exciting at what was happening in the front of the house.

‘Welcome to the Blumhouse’

Although the innovative production company Blumhouse is best known for hit horror films like “Paranormal Activity” and “Insidious,” the new film series dubbed “Welcome to the Blumhouse” has a somewhat broader scope, encompassing the company’s long history of supporting different kinds of genre pictures and indie dramas. The series’ first two movies, debuting October 6, are “The Lie” (a suspenseful story about parents protecting their possibly murderous child) and “Black Box” (about an amnesiac turning to quack science to piece together his past). One week later brings “Evil Eye” (based on an audio play about an Indian woman who worries that her daughter’s fiancé is the reincarnation of someone horrible) and “Nocturne” (about a pianist who goes to extremes to outperform her more gifted sister).

‘What the Constitution Means to Me’

In Heidi Schreck’s Tony-nominated Broadway play “What the Constitution Means to Me,” she appears onstage as herself — embodying both the 15-year-old who used to win prize money by giving speeches touting the magnificence of the U.S. Constitution, and the adult whose life experiences have made her turn a more critical eye toward what the document does and doesn’t do. Before the show wrapped its run last year, the director Marielle Heller filmed the production, capturing Schreck’s funny and provocative examination of how school kids are too often encourage to limit themselves to a one-dimensional kind of patriotism.

The frequent collaborators Nick Frost and Simon Pegg re-team for “Truth Seekers,” a horror-comedy about a paranormal investigator who uncovers a possible world-ending conspiracy. The pair cocreated the series with James Serafinowicz and Nat Saunders, and Frost also stars as the hero, Gus, an intense loner who works as a cable installer while hunting ghosts. Pegg has a smaller role as Gus’s mysterious boss. Although the duo don’t spend much on-screen time together, this show is still a must for fans of “Spaced” and “Shaun of the Dead.”