Watching is The New York Times’s TV and film recommendation website. Sign up for our thrice-weekly newsletter here.

The holidays can be a stressful time, even in the best of families. So in this month’s roundup, we’ve looked for the most soothing and crowd-pleasing TV series and movies coming to the major streaming services in December, with special favor bestowed upon anything nostalgic or mouthwatering. Below are the most interesting of what we’ve found, followed by a roundup of all the best new titles in all genres. (Streaming services occasionally change schedules without giving notice.) 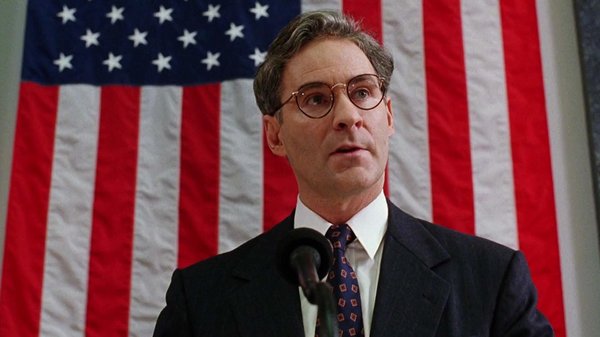 What if you suddenly had a chance to be the president? It happens to an ordinary man named Dave Kovic (a versatile Kevin Kline) — but only because of his uncanny resemblance to Bill Mitchell, the actual U.S. President (also Kline). When Mitchell has a medical emergency, Dave finds himself in the Oval Office. Naturally, high jinks ensue. (It’s particularly satisfying to watch him balance the budget). A fun romp for political junkies on both sides of the aisle.

Despite being set in early February, “Groundhog Day” is an existential holiday movie in the same vein as “A Christmas Carol” or “It’s a Wonderful Life”: A smug protagonist is compelled to rethink his mortal sojourn — how he has spent his days, how he has treated people — and to realize the error of his ways. Here, the case study is condescending TV weatherman Phil Connors (a wonderfully grouchy Bill Murray) who makes an annual trek to cover the big Groundhog Day festival in Punxsutawney, Penn. — only to find himself mysteriously condemned to relive the day over and over again. Is he in purgatory? A makeshift parallel universe? He doesn’t know and can’t escape, so he learns to make the best of it, ultimately connecting with his fellow human beings (including WrestleMania fan Michael Shannon). Like Phil’s day, this movie becomes better with endless repeat viewings.

[Here is The New York Times’s list of the best movies on Netflix right now.]

Now that “The Marvelous Mrs. Maisel” has won eight Emmy Awards, what next? How about Paris and the Catskills? Midge Maisel (Rachel Brosnahan at full sparkle) and her efforts to break into stand-up comedy in the late 1950s are still central, but the show’s world has opened up, along with new opportunities for ensemble players. Some of the best moments are meticulously choreographed set pieces in which cameras and characters glide around each other, with dialogue overlapping. Rarely have scenes of people lugging furniture into a vacation cottage, or answering calls in the switchboard room, been so fascinating to watch. Midge still gets the wittiest rat-a-tat banter, of course, but now she has lots of highly entertaining help. Dizzying and delightful.

‘Mowgli: Legend of the Jungle’
Starts streaming: Dec. 7, on Netflix.

The director and motion-capture master Andy Serkis’s take on “The Jungle Book” is for those who prefer their anthropomorphized animals to look like they actually live in a jungle — in other words, less cute and cuddly and more scruffy and muddy. Adopted by wolves, Mowgli (Rohan Chand) struggles with his precarious place in the pack; if he can’t keep up, he will be cast out. But might this wild child be able to adapt to the human world? A colonial hunter (Matthew Rhys) takes Mowgli under his wing, and Mowgli is befriended by a village woman (Freida Pinto) during Holi festivities. As Mowgli straddles the two worlds — belonging to both and to neither — the story turns dark. And no one, animal or human, gets off easy. Major plus: the stellar voice work by Benedict Cumberbatch (as the tiger Shere Khan) and Christian Bale (as the panther Bagheera).

Some baking shows you watch to marvel at the artistry, but not “Nailed It!” This American series is for the barely-able-to-bake set, people who consider it a win if their pathetic attempt at patisserie resembles anything in the vicinity of say, a cake pop, a doughnut or an elaborate exercise in excess fondant. (Seriously, what is the deal with fondant, “Nailed It!”?) These holiday episodes are a mad chef’s laboratory for dreidel-shaped cake pops, polar animal confections and edible nativity scenes. “This baby Jesus is the most delicious baby I’ve ever eaten,” host Nicole Byer quips at one point. And later: “I can’t wait to eat Santa.” OK, maybe you can.

You thought witches didn’t celebrate the holidays? What is a Christmas tree if not a holdover from the pagan practice of keeping a Yule tree (and burning a Yule log) to ward off spirits during the darkest time of the year? In this particular winter solstice, Sabrina is more interested in welcoming spirits to the Spellman home, and in this special — which is nearly a stand-alone episode, occurring after the events of Season 1 — Sabrina conducts a séance, Susie moonlights as an elf for a store-based Santa and Madam Satan enjoys a gingerbread house. True, those gingerbread cookies look suspiciously like Sabrina and her two aunts, but … nothing to see here, right?

In the beginning, there are only splashes of water rushing across stone tiles, then receding. Eventually we realize we are watching Cleo (Yalitza Aparicio, in her first role), a live-in domestic worker for a middle-class family in Mexico City, scrub the household driveway. The movie, shot in gorgeous black-and-white, is a moving, semi-autobiographical interpretation of the Oscar-winning director Alfonso Cuarón’s own childhood in the 1970s. Cleo is modeled after his family’s live-in housekeeper, Liboria Rodriguez, and Cuarón imagines the world through her eyes, noting, with intimate deal, the conflicted status of servants who are both quasi-family members and, inevitably, perpetual outsiders. A must-see.

The story of a boy and his dog, basically. But since this is a Wes Anderson film, and it’s made in painstaking stop-motion animation, there’s a bit more to it than that. The boy is Atari (voiced by Koyu Rankin), and he’s on a mission to rescue his loyal canine Spots (Liev Schreiber) from Trash Island, where the dogs of Megasaki have been quarantined by a cat-loving, dog-phobic mayor (Kunichi Nomura, who co-wrote the script). Anderson’s whimsy is relentless as always, but depending on your reading of its usage, the movie is either a sincere tribute to, or plunders, Japanese art, cinema and music. On another level, it’s also a parable about bigotry, propaganda, the rise of authoritarian regimes and the need, everywhere and always, for compassion.

If the 1978 animated adaptation of Richard Adams’s novel left you with emotional scars as a child, be assured that this limited series is a gentler viewing. Which isn’t to say there’s no danger or pain involved as a group of refugee rabbits set out in search of a new home when one of their own, the nervous Fiver (voiced by Nicholas Hoult), has visions of “something bad” coming. Something bad is always coming for rabbits, of course — they are preyed-upon creatures, after all — but the destruction of their natural world forces them to confront their concept of mortality and to reassess established power structures, as well as the price they are willing to pay for peace. It’s easy to love these little guys and girls (there are more female rabbits this time around) and as we spend more time with Fiver, his brother Hazel (voiced by James McAvoy) and their pal Bigwig (John Boyega), we become invested in their fates. Prepare yourself for the usual “Watership” waterworks.

Audrey Hepburn’s Holly Golightly is vividly remembered for her sleek dawn-of-the-sixties styles — the little black dress, the big sunglasses, the jaunty cigarette holder. In Blake Edwards’s celebrated movie version of Truman Capote’s novella, she still casts a spell, and not just over the men passing through her breezy New York life — has the city ever seemed more emblematic? — but over us, too. (Just skip over Mickey Rooney’s offensive caricature of a Japanese landlord — Edwards should have.)