At sites large and small throughout the city, you’ll find the event’s usual mix of A-listers (like Conan O’Brien on Thursday at the Beacon) as well as up-and-comers (Desus Nice and the Kid Mero at Madison Square Garden’s Hulu Theater on Sunday). But as a comedian myself, I am most excited for the lesser known performers who are about to receive the spotlight. The festival features several comedians of color, and also serves as a barometer of where the industry is as a whole. Podcasts, improv and sketch make up a good chunk of the programming, an indication of the diverse ways that comedy is consumed in 2018.

Here are the five acts I am most looking forward to. For show details, go to nycomedyfestival.com.

Saturday and Sunday at Joe’s Pub

You’d be hard-pressed to find a time when the Egyptian comedian Bassem Youssef’s material was more poignant, especially in the aftermath of the killing of the Saudi dissident Jamal Khashoggi.

Known as “Egypt’s Jon Stewart,” Youssef, a former heart surgeon, rose to fame after the revolution there for his satirical criticism of conservative sheikhs and others in power, including Mohamed Morsi, the Egyptian president then. In 2013, Time magazine named Youssef one of the 100 most influential people in the world. The next year, he announced he was ending his television show, citing safety concerns after Gen. Abdel Fattah el-Sisi took power. Youssef fled the country and now lives in the United States, the rare dissident comedian.

Last year, he released a book, “Revolution for Dummies: Laughing Through the Arab Spring,” and took his one-man show on tour. His festival performances will incorporate material from that show as well new details about his experiences in Egypt and his new life in the States.

Simply put, there are not many comedy shows in New York that focus solely on women of South Asian descent. Some notable exceptions come close — Dean Obeidallah and Maysoon Zayid’s “The Big Brown Comedy Hour” is performed throughout the year. But until recently, South Asian comics had a difficult time finding exposure. There has been some movement, as Hasan Minhaj’s new Netflix show, “Patriot Act,” and Aparna Nancherla’s rise both prove. (Minhaj will be performing at the festival with his sketch troupe, Goatface.)

“Facial Recognition Comedy” features Ayanna Dookie, Fizaa Dosani, Sonya Vai, Karmen Naidoo, Zahra Ali and Pallavi Gunalan, all up-and-coming comedians and actresses. The artists have said the show “was formed out of frustration from being confused for each other due to our similar ethnic heritage and skin color, despite each comic’s distinct voice and life experiences.”

Once in a blue moon, I hear a standup joke that makes me think, “That is absolutely a perfect joke.” For me, one of them is Tig Notaro’s “No moleste.”

She’s a brilliant, bold comic whose sense of deliberate patience is unmatched, even when the material might make audiences uncomfortable. Let’s not forget that one of her most audacious shows actually took place at the New York Comedy Festival in 2014. Following a double mastectomy, she performed the set topless.

Notaro has been busy, expanding her range far past stand-up. She recently delved into science fiction, joining the cast of “Star Trek: Discovery” for its second season next year. Variety reported last month that a Notaro-created one-hour dramedy was in development at ABC. And last spring, she released a Netflix special, “Happy to Be Here.” She is the kind of comic who makes you wonder what she’ll pull off next.

‘And That’s Why We Drink’

Friday at the Gramercy Theater

Ghost stories. True crime. Exploration of the paranormal. Boxed wine. Christine Schiefer and Em Schulz’s podcast, “And That’s Why We Drink,” seems like an odd fit for a comedy festival, but content is content, and this show, known for its audience involvement, is popular. Schiefer and Schulz have chemistry and present dark paranormal stories in an easily digestible way. 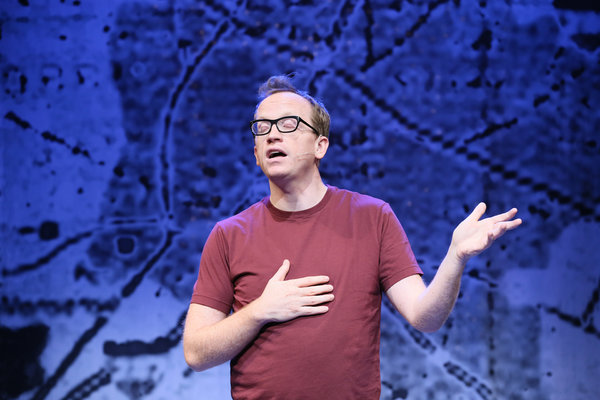 Chris Gethard has always found strength onstage in vulnerability, and nowhere was this more clear than his solo show dealing with mental illness, “Career Suicide,” which was turned into an HBO special. Just last month, he published “Lose Well,” which examines the benefit of failing, one of several books he has written on looking inward. And I haven’t even mentioned his delightfully weird television series, “The Chris Gethard Show” (which was recently canceled).

It is his openness and willingness to reflect that makes his podcast, “Beautiful Stories From Anonymous People,” so compelling: in every episode, he takes one call and speaks to that person for an hour. There are no names and no ground rules. Well, there’s one: Gethard cannot hang up first.

A 2016 segment has always stuck with me, when an anonymous man from Denton, Texas, on his break from a soul-sucking customer service job, called Gethard to say he felt that he had “wasted the last year” and that he was giving up on life. In the course of the conversation, we learned that when he was born, the doctor who delivered him was Ron Paul, who would become better known as a libertarian congressman. Then the anonymous man revealed that his mother had been in prison on drug charges and had been let out to give birth.

Eventually, Gethard convinces the man to change his life, starting with screaming as loud as he can. By the end, he is ready to start doing comedy open mics and has seemingly found a new lease on life.

After hearing himself on the podcast, the man quit his job.