This article contains spoilers for the final episode of “Supernatural.”

“Supernatural,” the CW’s seemingly ageless monster-hunting show, ended its 15-year run Thursday night on its own terms. It had taken care of business the week before, wrapping up its final story line — the Winchester brothers staving off the apocalypse one last time — and gifting its singularly devoted fans a snappy retrospective montage slyly set to “Running on Empty.”

Thursday’s series finale was an earnestly sentimental coda that felt as if it were less about Sam and Dean Winchester than it was about Jared Padalecki and Jensen Ackles, the actors who have spent much of their adult lives playing those demon-slaying brothers, and the extensive “Supernatural” family — producers, writers, cast and crew — that revolves around them.

Dispelling any hope offered in the penultimate episode that the brothers’ long-awaited takedown of God, also known as Chuck (Rob Benedict), had freed them of their hunting duties — their goal through most of the series — the finale sent them on a routine mission to clean out a nest of vampires. They took care of their bloody business, as always, and saved a Winchester-like pair of young brothers in the bargain.

But the warrior Dean died ignominiously, impaled on a nail, and woke up in heaven, formerly a viper’s pit of scheming angels but now a sylvan wonderland. His old comrade in arms, Bobby (Jim Beaver), and his beloved muscle car, Baby, were waiting for him, and eventually Sam joined him. The hunt was finally over, though heaven’s trout population was probably endangered.

It was an odd, awkward, maudlin and, in keeping with the show’s habits, self-referential exercise. It honored the gorgeous British Columbia landscapes that had stood in for every corner of the United States and served as Jensen’s and Padalecki’s second home. The prominence of the Winchesters’ Impala and the Kansas anthem “Carry On Wayward Son” (the episode’s title was “Carry On”) celebrated the iconography, visual and aural, that had been central to the show’s texture. Cast, crew and car assembled for a final thank-you to the fans, which was followed by the words “And — cut,” symbolizing the very thin line the show had always kept between fiction and fandom, art and audience.

This willingness to go out with an idiosyncratic (and possibly divisive) flourish was in keeping with another notable aspect of the show: No one had expected it to last more than five seasons — what had been planned as the series finale came and went — and there was a palpable sense that the producers had been playing with the house’s money for a decade.

They were willing to throw things at the wall, and some of the things that stuck were highly entertaining. “Supernatural” was always comfortable poking fun at itself, and it had a relaxed, amusing touch with high-concept episodes like an animated “Scooby-Doo” crossover. After the Season 4 revelation that Sam and Dean had inspired a series of “Supernatural” comic books and were minor celebrities with a fanatical following among young women, clever stand-alone episodes placed them at a fan convention and a production of a high school “Supernatural” musical.

A similar audaciousness applied, with more mixed results, to the show’s continuing story lines. “Supernatural” was created by Eric Kripke in 2005 with DNA from “The X-Files” and “Route 66” and a tincture of “Twin Peaks” — a horror road show with a strong dose of Americana, with powerful cars barreling down country roads at night and frequent stops for pie at retro diners. The paranoia was cut with nostalgia and the violence wrapped in sentimentality, and the whole package, with its sensitive beefcake leads, was calibrated for the young audience of what was then the WB network.

Then Kripke’s original story arc ended, and he stepped aside as showrunner, and the plot — already fantastical, with demons at crossroads and characters dying and being reborn left and right — went progressively more nuts. Heavenly wars were fought, Lucifer was caged in hell, and Chuck, the author of the “Supernatural” books, turned out — five seasons later — to be God, a vain, sarcastic and insecure deity who became the show’s big bad. 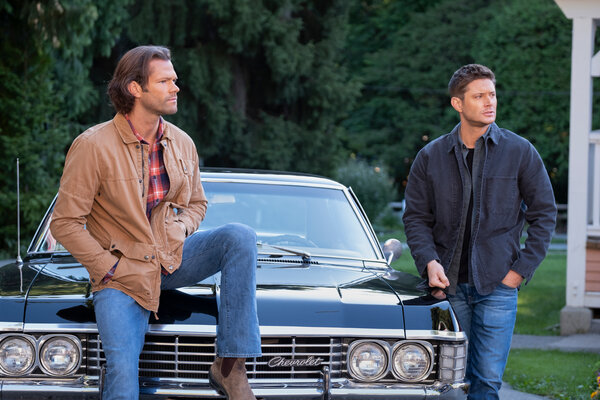 It takes some guts to posit, even in metaphorical terms, that God is the writer of your long-running broadcast-network spook show, and then to cast him as your villain. At the same time, it’s fair to say that for the past 10 years it’s felt as if “Supernatural” were being made up as it went along — that the story just had to make enough sense to make it to the end of the episode, or sometimes to the end of the scene.

It’s also fair, if a little unkind, to say that “Supernatural” was never really a very good show. But it was a likable show, and an honest show, and it was eager to please. It didn’t demand much from its audience beyond a good memory for its large and shifting universe of characters. Its performances made up in sincerity what they lacked in polish.

It had an agreeably ramshackle quality that fit with its retro, rural ambience. Watching it was like making a weekly visit to an antiques barn or one of those eccentric, warren-like country stores where you never knew what you would find in the back room — a book of binding spells or a demon-killing six-shooter.

Loosely tying everything together, like slapped-on baling wire, were the bonds of family — father and sons, mother and sons, brother and brother — that received a lot of lip service but mainly functioned as an organizing principle, or background hum. The real theme was survival, in a particularly American sense: Saving the world was the Winchesters’ job, and their minds were constantly on the peaceful retirement it would someday earn them. It took 10 years longer than they planned, but they finally got there.