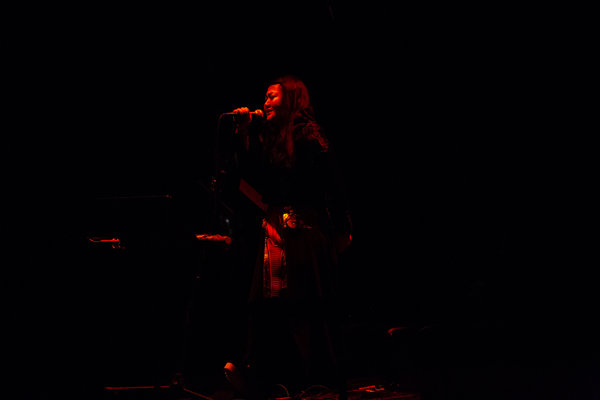 [Read all of our classical music coverage here.]

Happy Thanksgiving! I hope you are having a peaceful holiday, full of gratitude. For great music, among other things.

I was in Italy last week for the premiere of Gyorgy Kurtag’s opera based on Beckett’s “Endgame.” (Loved it.) I had arranged for a few days of vacation beforehand in Venice (yes, a lot to be thankful for, indeed), and wasn’t anticipating any concerts.

But lo and behold: I passed a poster for a free performance by the Mary Halvorson Octet, part of a smartly programmed university-run series in an old auditorium in the Dorsoduro neighborhood. How could I resist?

A survey of the group’s 2016 album “Away With You,” it was a deliciously, deliriously spacey show, with tight tunes that diffused into leisurely solos. The title track is my favorite: sun-drenched beach doo-wop that goes in unexpected but low-slung, relaxed directions. Gorgeous.

Nate Chinen wrote a wonderful profile of Ms. Halvorson back when “Away With You” came out. And she’s shown up on The Playlist, our weekly pop rundown, as recently as September.

Next, read a trio of acute essays about new composer biographies: John Adams on Debussy, Jeremy Denk on Schumann, and Corinna da Fonseca-Wollheim on Chopin. (And in The New York Review of Books, another composer, Matthew Aucoin, considers Debussy, the man and the music.)

In The New Yorker, Alex Ross writes in praise of the Los Angeles Philharmonic. (“No classical institution in the world rivals the L.A. Phil in breadth of vision,” he says, and we agree.) And in our pages, Joshua Barone also plugs L.A., contrasting Susanna Malkki’s powerful vision of Mahler’s Fifth out there with the Boston Symphony’s tamer rendition of the piece at Carnegie Hall.

Other highlights of the week: Miller Theater hosted a portrait concert of the composer Du Yun. The French Baroque specialist Emmanuelle Haïm made her New York Philharmonic debut. Julius Eastman’s Symphony No. 2 had, three decades after it was written, its world premiere.

And I highly recommend this oral history, in the online music magazine Van, of some of the (very) few people who came to know the wary, magisterial Russian composer Galina Ustvolskaya. It reminded me of one of the highlights of my year: Markus Hinterhäuser’s dumbfounding performance of Ustvolskaya’s six piano sonatas at the Ojai Festival in June.

Music-making truly to be thankful for. ZACHARY WOOLFE

The Riverside Symphony, founded in 1981 and still run by the conductor George Rothman and the composer Anthony Korf, has been a model of fresh, inventive programming. Its recent concert at Alice Tully Hall opened with Franz Schreker’s seldom-heard 1916 Chamber Symphony, a work that came across in this glittering performance like a cousin to Schoenberg’s Chamber Symphony No. 1, from 1906. But if Schoenberg’s music tries to push against the bonds of tonality, Schreker’s, while just as harmonically restless, seems more willing to bask in sumptuous diatonic sonorities.

The jazzy elements were nicely complemented by the stylish performance of Weill’s “Little Threepenny Music” suite. At the center of the program was the New York premiere of Stephen Hartke’s excitingly frenetic “Ship of State” (2017), a de facto piano concerto scored for 20 players. I loved the way volleys of skittish lines would hover on the divide between vibrant jazz riffs and stern pointillist strands. Mr. Hartke wrote the piece for pianist Xak Bjerken, who played it dazzlingly. A major Los Angeles composer, Mr. Hartke is not heard enough in New York. Check out the performance above, of his riveting 2015 piano trio “The Blue Studio.”

And the Riverside Symphony has recorded some exceptional Hartke works, including his brilliant, impish Violin Concerto, “Auld Swaara.” ANTHONY TOMMASINI

The tenor Juan Diego Flórez’s recital at Carnegie Hall on Sunday afternoon was a lovefest. “We missed you!” one fan yelled, prompting a long round of affirmative applause. Indeed, Mr. Flórez, who won acclaim as a bel canto superstar, has been absent from the Metropolitan Opera for more than three years. He returns on Dec. 4 for a new production of “La Traviata.” He was in top form during his recital, with the pianist Vincenzo Scalera. Though he sang some beloved arias by Donizetti and Gounod splendidly, this Peruvian artist may have been the most revealing during his first three (of seven!) encores: songs in Spanish, accompanying himself on guitar. He began with “Bésame mucho,” a Mexican love song by Consuelo Velásquez (and the title piece of Mr. Flórez’s new Sony album).

He followed with songs by the Peruvian singer-songwriter Chabuca Granda and the Mexican composer Tomás Méndez. Though he found moments to let phrases soar with operatic splendor, Mr. Flórez brought a touch of cabaret crooner to his lovely performances of these intimate songs.

It was no surprise that for another encore he sang Donizetti’s tenor showpiece “Ah, mes amis,” tossing off the string of high C’s effortlessly. But, perhaps hinting at where he might be heading as his voice matures, he ended the program with an ardent, rich account of Puccini’s “Che gelida manina.” Above, he sings the aria (most of it, anyway) at a recent recital. See what you think. ANTHONY TOMMASINI