Like the fictional Beth Harmon in “The Queen’s Gambit,” she’s trying to find a way to get to Russia to compete. Unlike Beth, she’s blind.

Have you heard this story before? Girl has rough start in life, discovers chess. She becomes a United States champion. She studies Russian. And now she needs to find a way to get to Russia to play chess, because she can’t afford it.

No, I’m not talking about Beth Harmon, the fictional hero of the Netflix megahit “The Queen’s Gambit.” Meet Jessica Lauser, the reigning three-time U.S. Blind chess champion. You can call her Chessica — the nickname her math teacher gave her in eighth grade.

Lauser, now 40, was born 16 weeks prematurely. Like many infants born that early, she needed oxygen, which damaged her eyes, a condition called retinopathy of prematurity. One eye is completely blind; in the other she has 20/480 eyesight. Her visual field is limited, and the chess pieces appear blurred and distorted. She can tell when a square on the board is occupied, but she can’t always tell which piece it is.

When she’s playing against a sighted player in a tournament, she will explain all of this. The biggest problem is the touch-move rule in chess, which says that if you touch a piece, you have to move it.

“If I need to identify a piece during a game, I will lightly touch the top of it and say ‘identify,’ not grasping the piece, but just brushing it,” she says. Aside from that, says Michael Aigner, who was recently her teammate in the first Online Olympiad for People with Disabilities, “Nobody can tell that Jessica is blind.” Blind chess players often use a tactile set, a special board with pegs that allows them to feel the pieces without knocking them over. She does not. But she does have to remind herself of where the pieces are (unlike Beth Harmon, she doesn’t have a photographic memory, but she does have strong pattern recognition abilities), so identifying them by touch is sometimes useful.

Chess has been Lauser’s refuge for a very long time. She learned the game at age 7, when she transferred from the Arizona State Schools for the Deaf and Blind to a mainstream school. At that age, she says, “it was just a game like Monopoly or Parcheesi.” But by seventh grade, when she started at a new school in California, she had begun to take the game more seriously.

“When I walked into class on the first day, the first thing I saw at the back of the room were waist-high cabinets with chess sets on top,” Lauser says. “I knew that the kids were going to call me ‘Four-Eyes,’ and I said, ‘Hey, maybe if I beat them, then they will finally shut up.’”

Lauser, who now lives in Kansas City, Mo., and works for the Internal Revenue Service, has lived in a staggering number of places, as her blindness has made it difficult to secure a steady job. She has been homeless within the past year. It’s a very sore subject with her. “What frustrates me most is not getting a fair shot at life, because of how I was born,” she says. In order to maintain her eligibility for Social Security Disability Insurance, she cannot make more than $2,110 a month.

“The limit is hard and fast,” she says. “It has kept me in perpetual poverty, my entire adult life, even though I have always worked. That’s why I play chess, because it helps me cope with all the things I cannot change, that especially.”

She later added: “I don’t want pity, but rather opportunity. I just want to be equal.”

She has honed her chess game on the streets: Market Street in San Francisco, Santana Row in San Jose, Dupont Circle in Washington. Her favorite place was the student union at San Francisco State University, where she got her undergraduate degree at age 36.

“I would set up multiple sets at a time and take on all comers,” she says. She drew a crowd, not so much because she was blind or a woman, but because the struggle of one person against many never fails to fascinate. The nearby stores noticed that their sales increased when she was there, as people stopped to watch. “The coordinator of the building told me, ‘I hope this won’t offend you, but we’d like to adopt you!’”

Because she has played so much on the streets, she plays very fast, using openings that are often considered unsound for tournament chess. In blitz, or five-minute chess, her peak rating placed her one category below master. Getting a master title is still her goal, although she is aware that the odds are against her: Not many players have achieved this in their 40s. “I am not giving up this dream of mine,” she says. 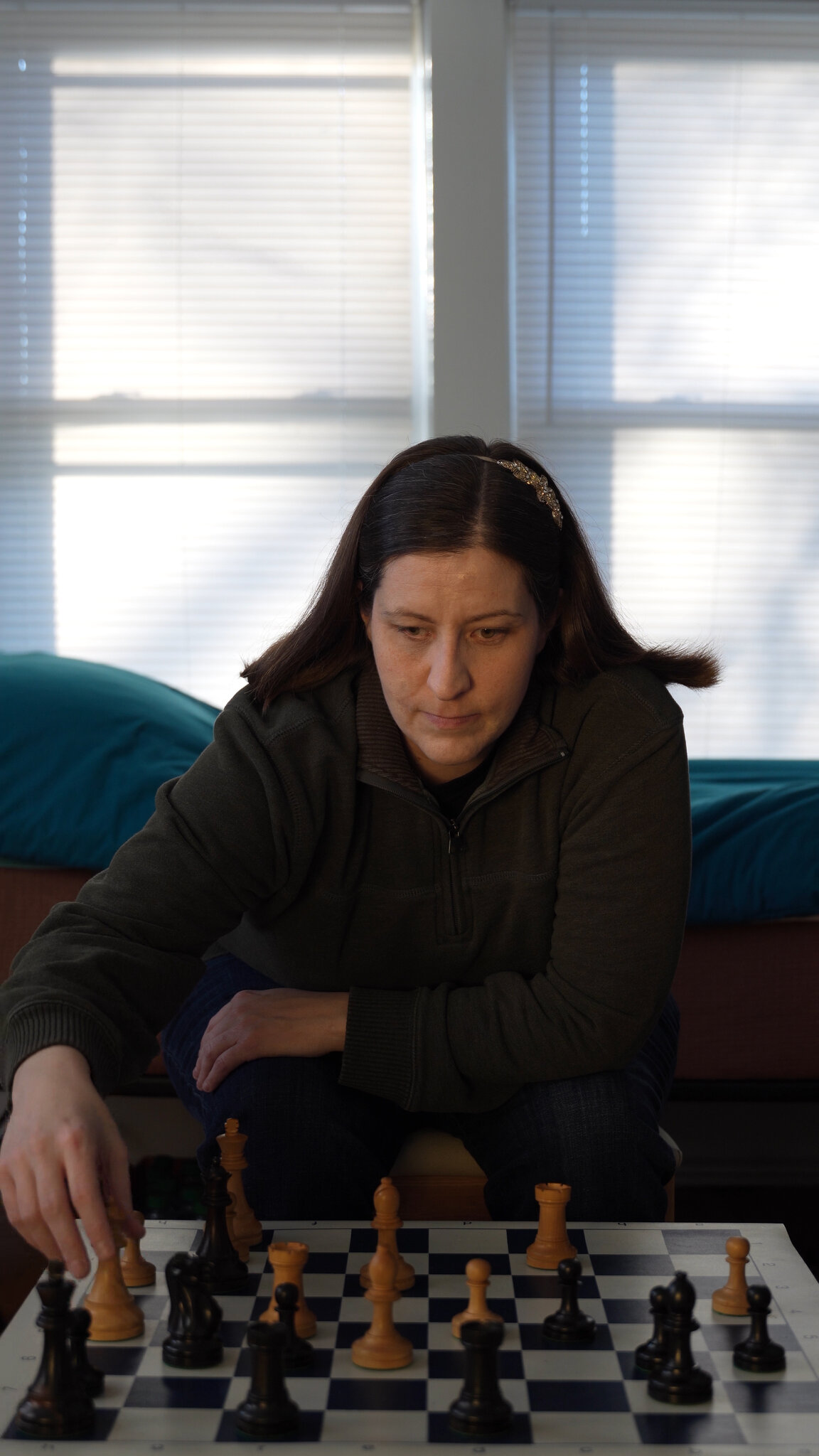 In October, Lauser won her third consecutive U.S. Blind championship — a tournament that was held in person, in spite of the pandemic. It had been postponed from July. Before the pandemic, says Virginia Alverson, the president of the U.S. Blind Chess Association, she had hoped to attract 20 participants. (Normally about 10 players come, out of about 100 members.) But with the pandemic, they had to settle for three: Alverson, her roommate, Pauline Downing, and Lauser. “We felt that if Jessica was willing to travel from Kansas City to New Hampshire to defend her title, we should have some sort of tournament,” Alverson says. “It says a lot about Jessica that she wanted to come. Jessica loves to play chess. And truth to say, I wanted to see Jessica.”

This year’s Olympiad for People with Disabilities, held over Thanksgiving weekend, was a much higher-profile event. Originally scheduled for Siberia in August, it was moved online, and attracted 60 teams from 44 countries. The U.S. team, led by Aigner on first board, tied for tenth place. Lauser started slowly but won a key last-round game against a player from Brazil. And she was arguably the most important player, because each team was required to field a female player. Without her, there would not have been a U.S. team.

“In the middle of the tournament, after she lost the first three rounds, we played about an hour of blitz chess, just for fun,” Aigner says. “She was playing all of her gambits against me, and in some of the games I got in trouble. When she finally won in round four, my reaction was thank goodness someone else gets to see how good you are. She was playing the style she played against me in blitz, and of course she won.”

Currently (subject to change), the next Olympiad is scheduled for Russia in 2022. Lauser would like to go, but she is not sure how she can. This year, before the event in Siberia was canceled, FIDE, the international chess federation, offered to pay accommodations plus 1,500 euro for travel — or about $1,800. “Whether that would get people to Russia and back is debatable,” says Chris Bird, FIDE events manager of the U.S. Chess Federation. Until the pandemic is over, the federation is not giving financial support to teams for international events.

For Lauser, it’s a familiar story. She has also qualified for the world blind championship six times, but has never been able to attend.

In the short run, Lauser hopes to keep her job in Kansas City, as well as her current apartment, from which she can hear the trains rumble by on their way to and from Union Station. Long-term, she says, “My dream situation would be to make enough money to live on, to not be struggling with debt, maybe to have a home at some point. To be able to use Russian every day, to be able to compete, to be able to help others. Maybe live in Russia, teach English and play chess.”