Salman Toor’s evocative, tenderly executed paintings begin to pluck at your heartstrings almost as soon as you see them. The 15 examples of new and recent work that form “How Will I Know,” the artist’s brilliant New York institutional debut at the Whitney Museum of American Art tell the stories of lanky, slightly rubbery dark-haired young men, gentle souls who wouldn’t hurt a flea. The narrative import zigzags from the personal to the social and political and back.

It doesn’t take long to figure out that the main characters here are gay, and not white. Early in the show hangs “The Star,” a 24-inch tondo (or circular work) its roundness echoed by the image’s elliptical mirror. A young man wearing a fluffy pink jacket admires his reflection while two friends tend to his hair and makeup. It’s party time. The light skinned blondness of the hairdresser accentuates the brown skin of our hero. 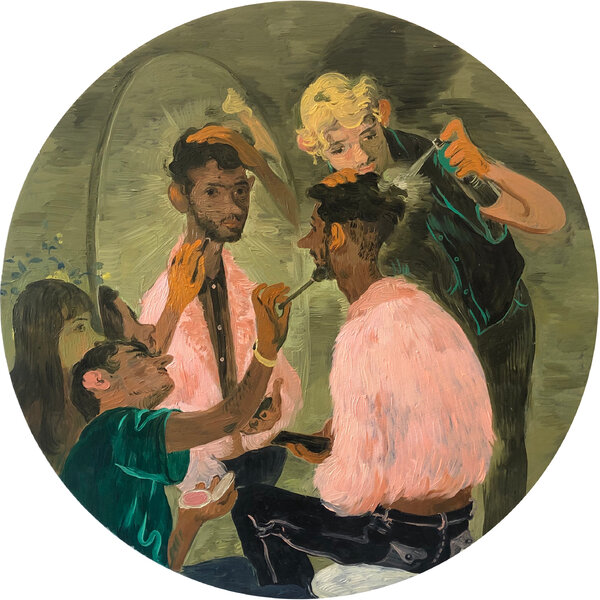 Mr. Toor was born in Lahore, Pakistan, in 1983, studied art at Ohio Wesleyan University and lives in the East Village. His paintings are imagined scenes based on his and his friends’ experiences as gay brown men both in South Asia and New York. He works in an aesthetic territory bordered by painting, illustration and cartooning. In fact the entire show almost forms an unusually sumptuous graphic novel.

The mood in these paintings is introspective yet ever-so-slightly comedic even when things turn sinister. The carefully modulated light and color — a wonderful, murky nearly monochromatic green prevails throughout several of the best — cast their own spell. All this exerts an emotional pull that is rare, even in a time of outstanding figurative painting in which style and substance, motivated by issues of identity, regularly go hand in hand.

Another key element tying Mr. Toor’s compelling narratives together is touch. His delicate, caressing brush strokes and intriguing textures are somewhat too large for the images. So they remain staunchly visible and comforting, conveying crucial details and capturing the telling facial expressions at which the artist excels.

A possible narrative unfolds in the show, which has been organized by the curator Christopher Y. Lew and Ambika Trasi, an assistant curator whose exceptional essay on the artist can be found at the show’s website. In “Car Boys” (2019), the protagonist and a friend have an unpleasant encounter with the police back home. “Tea” (2020), one of three great mostly green paintings here, depicts a tense confrontation with his family. While he stands to one side looking dazed and bereft, his grim-faced father sits, staring downward, his anger telegraphed by the orange tip of his cigarette. His mother, also seated, turns toward him, her twisted, ungainly posture conveying pain, discomfort and conflict.

Then the central character sets out. In “Man With Face Creams and Phone Plug” (2019), we see him suffering through airport security, his pink toilet kit open before him, trying to look innocuous in a composition that is blank yet still manages to evoke Édouard Manet’s “The Bar at the Folies-Bergère.”

Then he’s in New York, where things are better but not entirely. “Nightmare” (2020) shows him lying, stripped, in an alley, his arms raised beseechingly, like Caravaggio’s Paul on his way to Damascus. His two assailants stand over him, but the semi-grisaille scene is ambiguous: It may all be a bad dream.

In “Bar Boy,” the show’s second great green painting, he’s a newbie, stepping into a bar alone, like the erstwhile provincial Frédéric Moreau, of Balzac’s famous novel “Sentimental Education.” In “Four Friends,” also green, a cozy gathering is made more so by wine and dance. Especially in these two works, the green provides a magical otherworldly interiority, as if it’s a color seen only by our hero and his friends. And on the show’s final wall, a happy ending: He lies naked on a fluffy white bed in two paintings: dozing off in the light of his computer in “Sleeping Boy” and taking a selfie in “Bedroom Boy,” which is possibly a tribute to the solitary delight of Jean-Honoré Fragonard’s “Girl With a Dog” of 1770.

In a recent Instagram, Scott Rothkopf, the Whitney’s chief curator and senior deputy director, aptly connected Mr. Toor’s work to Louis Fratino’s and Jonathan Lyndon Chase’s — both then on view in impressive gallery shows — as three extraordinary artists whose paintings focus on gay life and love. Although all are consummate stylists (something that doesn’t get talked about enough these days) and formidable draftsmen, they are very different. Mr. Fratino’s tends to depict domestic reveries in which we see the artist, in the studio or at the kitchen table or in bed with or without his partner. Mr. Chase pushes the erotic undercurrent into the open and also into the realm of fantasy and semi-abstraction.

Mr. Toor shares a debt to illustration with Mr. Fratino and sexual frankness with both of them. But unlike either, he also places his protagonists squarely in a real world that’s not always welcoming. This gives his paintings a reportorial edge, quashing any inclination to see them as sentimental or nostalgic.

Another difference is Mr. Toor’s complex and respectful (not ironic) conversation with past painting. Upon entering the show, my first thought was of intimate surfaces of Rococo painting — François Boucher and Fragonard. Further in, Jean-Antoine Watteau’s sad clown, Pierrot, standing slack-armed before us may come to mind in “Tea” and “Bar Boy” where he even wears a wide-brimmed hat reminiscent of Pierrot’s. “The Arrival” in which one man greets another at the door of an apartment is emotionally charged, like a biblical encounter, say, between Jesus and Saint John the Baptist. And it can’t be by chance that in several paintings, the light around the head of Mr. Toor’s main character burns bright, coalescing into something like a halo.

Salman Toor: How Will I Know