In the mid-1960s, three of Richard Avedon’s closest friends reached Olympian heights in their respective fields: Truman Capote published “In Cold Blood,” an overnight best seller that would forge a new genre in literature; Mike Nichols received an Academy Award nomination as director of “Who’s Afraid of Virginia Woolf?”; and Leonard Bernstein won a Grammy for his “Third Symphony (Kaddish).” Their achievements cast Avedon’s own career in stark relief. He may have been the most glamorous photographer in the world, but in the context of film, literature and classical music, he was still only a fashion photographer. It irked him, too, that his portrait work was considered “celebrity photography.”

The prestige of his name had indeed come from his portraits of Marilyn Monroe, Brigitte Bardot, Elizabeth Taylor, and the Duke and Duchess of Windsor, but by then he had also established his own visual pantheon of arts and letters with portraits of W.H. Auden, Marianne Moore, Ezra Pound, Isak Dinesen, Marian Anderson and Jasper Johns, among many others. “Don’t think about who they are,” he would later tell people who marveled at the prominence of his subjects. “Just look at their faces.”

Avedon was of a generation that endured the threat of the atomic bomb. More and more, he photographed his subjects like specimens under the forensic scrutiny of his lens for the strain of existential dread that runs through our species at the thought of annihilation. Certainly, no one is smiling against the white nuclear backdrop in his portraits.

Now, in his early 40s, and notoriously competitive, he measured himself against his friends’ triumphs. “I had this block,” he later recalled about that period. “I could photograph, but I couldn’t do anything that meant anything to me for a number of years.” His breakthrough occurred in the late 1960s as he had been searching for a way to represent that tumultuous era — in effect, a way to “portraitize” a set of cultural values that defined the period.

In August 1968, the Democratic National Convention in Chicago attracted thousands of antiwar protesters. The police used tear gas and billy clubs to beat back the crowds in a clash that was televised for the entire world to witness — including the horrified parents of the student-age demonstrators. Eight political activists were arrested on charges of inciting the protests, but after the case against one of them, Bobby Seale, was declared a mistrial, they became known as the Chicago Seven. They would be Avedon’s first subjects in his new artistic endeavor. (A Netflix film about the notorious trial debuts Friday, Oct. 16.) 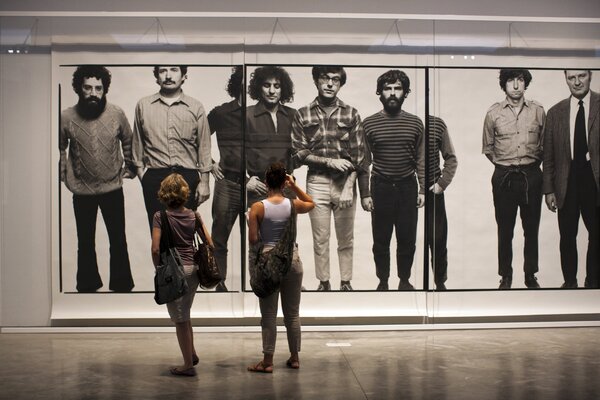 Avedon had just begun to use a new camera — an 8-by-10 inch Deardorff — which enabled him to make direct eye contact with his subjects, as opposed to the smaller twin-lens Rolleiflex he had always used that required him to look down into the viewfinder and away from the subject. “They couldn’t see my eyes, and I couldn’t see them,” he said. Now he could stand next to the camera and make direct eye contact with his subjects.

When the Chicago Seven trial began, in September 1969, Avedon took his new Deardorff, along with his studio entourage, to Chicago. He hung a large roll of white seamless paper in one corner of his Chicago Hilton suite and held a fund-raiser for the legal defense, inviting the defendants, their lawyers, and deep-pocket supporters. As the guests mingled, he asked them to step into the frame of his makeshift “proscenium,” trying for as much spontaneity as possible.

In one portrait, William Kunstler and Leonard Weinglass, the defendants’ lawyers, stand in profile, each with a drink, Kunstler’s finger aimed at Weinglass’s chest in heated conversation. That night, Avedon also made characteristic straight-on portraits of the defendants.

Two months later, he returned to Chicago and made what would be his first mural-size group portrait, a triptych by any other name, for which he had sketched out the positions of each subject in advance. “The Chicago Seven, November 5, 1969,” is composed of three frames printed on a single wall-size piece of paper with the continuity of a frieze, or a ragged police lineup. The size was radical — larger than life at 8½ feet tall by 12 feet wide — and the effect was bold and confrontational.

Lee Weiner and John Froines occupy the first frame as half of Abbie Hoffman’s body spills into their visual space from the center frame, where Rennie Davis is sandwiched between Hoffman on the left and Jerry Rubin. As if in a narrative stutter, Rubin’s right shoulder and arm glide into the last frame next to Tom Hayden and David Dellinger. Avedon created a perceptual anomaly in which two of the seven life-size subjects straddle the lines between one frame and another, teasing out the idea of movement.

In Avedon’s group portrait, the defendants “look like ordinary men,” Louis Menand wrote in a 2012 exhibition catalog, “Avedon: Murals and Portraits.” “They’re not threatening or defiant. They look tired and sad, a little geeky, people you might run into in the teacher’s lounge or at the laundromat.” For Avedon, the wall piece was a monument as much as a document; he considered them antiwar heroes who had endured political judicial overreach.

Avedon had simultaneously begun work on a new group portrait. He felt that Andy Warhol and his “superstars” might prove an ideal surrogate for what the press called the “sexual revolution.” The Warhol retinue was instrumental in paving the way for what would later become L.G.B.T.Q. visibility. The seductive, sexually frank tone of the song “Walk on the Wild Side,” written by Lou Reed, is a paean to this transgressive group.

In August 1969, Warhol arrived at the Avedon studio with 13 members of his Factory. Avedon photographed the entire group as they milled about the set. “One of the things I would try to do was show the studio,” he said, explaining his attempt to break the fourth wall, the invisible boundary between the stage and the audience. Not that it is possible to break the fourth wall — or, in this case, the surface — in photography, but Avedon was always testing the limits of the medium’s formal properties.

Avedon made 91 exposures at this first session. When Warhol returned two weeks later with some of the first group and a few new Factory faces, Avedon photographed them in smaller arrangements, but he was not happy with the results. He started looking at paintings for inspiration.

“Avedon’s primary antecedents were painters, particularly portraitists of the Dutch Golden Age,” Paul Roth, then curator of photography at the Corcoran Gallery in Washington, wrote in “Avedon: Murals & Portraits.” One example, “The Meagre Company,” by Frans Hals and Pieter Codde, is a Dutch militia group portrait (1633-37). The soldiers, out of uniform, appear full length in an informal lineup, some peacocking in haughty postures, others interacting with a spontaneity at odds with 17th century painting. “I wanted to see if I could reinvent what a group portrait is,” Avedon explained in a public conversation at the Metropolitan Museum in 2002.

“Take off your shoes, your shirts,” Jay Johnson, a Factory member, recalled Avedon saying, slowly, one step at a time, as if in a game of strip poker. Avedon later claimed to be fascinated by the graphic quality of their clothes as they fell from their bodies, which he included in the final portrait.

He pored over 200 8-by-10 exposures, shuffling them like playing cards, to compose the final lineup. Printing the group portrait was the next hurdle. He rented space in a commercial lab with industrial-size equipment to be able to make prints eight feet tall. A horizontal enlarger beamed the negative image across a room onto raw photographic paper on the opposite wall. “I had to dodge and burn with my entire body,” said Gideon Lewin, Avedon’s studio manager, who made the prints, and stood in front of the paper during exposure to vary the light on different sections.

“Andy Warhol and Members of the Factory, New York, October 30, 1969,” 31 feet long, took a year and a half to complete. It was not exhibited until Avedon’s first gallery exhibition at the Marlborough Gallery on West 57th Street, in 1975. The photomural was an eye-popping phenomenon.

The panoramic lineup includes Paul Morrissey, clothed; Joe Dallesandro, nude; Candy Darling, a preoperative transgender woman, standing nude, her male genitalia in counterpoint to her flowing hair and makeup; three male nudes standing in a pile of their clothes; Gerard Malanga; Viva; Taylor Mead; Brigid Polk; and Warhol. As a group, they pose a bohemian counterpoint to mainstream convention in an exhibitionistic lineup that reflects the red hot nowness of that era.

The choreography of posture, the rhythm of gestures, the ambiguity of the empty white spaces, evoke the sequential panels of a classical frieze, “as if the figures progressing around the belly of a Greek vase had paused for the photographer’s camera,” Maria Morris Hambourg, then the curator of photography at the Metropolitan Museum, wrote in 2002.

Avedon would make two more mural-size group portraits — including “The Mission Council, Saigon, April 27, 1971,” and “Allen Ginsberg’s Family” — within three years, reflecting a new level of rigorous artistic intention. Yet the art world did not grant full acknowledgment to the “celebrity photographer” as the consequential artist he was until the end of his life. He died in 2004.

The photographer Dawoud Bey, an eminence in the field today who has made the Black figure an abiding presence in his portraits, remembers seeing the large Avedon portraits when they were first shown at Marlborough Gallery. “They made a strong impression on me, more so than I would have been able to even articulate at the time, since I was just starting out,” he said, adding, “Avedon is a part of my DNA.”

Katy Grannan, whose portraits today take the genre forward from Avedon, as well as from Diane Arbus, said that while Avedon was not an early influence, he has become one. “He wasn’t a photographer we talked about in graduate school,” she said. “In hindsight, this is probably because he broke an unwritten rule. You could be a fine art photographer, a photojournalist, or a celebrity photographer, but you couldn’t be all three. Avedon was everything.”

But Avedon endured several art-world prejudices in his lifetime: the lingering attitude about photography as a second-class medium stuck in the graphic arts, and, equally, the church and state divide between art and commerce that heaped scorn on the gloss of Avedon’s fashion work. On top of that, “street photography” was ascendant in curatorial circles and it would not be until the beginning of this century that “studio” photography was given equal stature in critical thinking about photographic practice. Only at the end of his career was Avedon’s portraiture no longer dismissed as a stylized formula but understood as an artistic signature that advanced the genre in more sweeping art historical terms.

Mia Fineman, a curator of photography at the Metropolitan Museum of Art, considers Avedon one of the major photographic artists of the 20th century, and one of the most influential, not least for his murals. “The portrait style he established has become part of the vocabulary of photography,” she said. “He was seminal in both portraiture and fashion work. But especially groundbreaking were his multipanel murals, which flouted the conventions of traditional group portraiture yet managed to achieve a larger-than-life intensity that had never been seen before in photography.”

Philip Gefter is the author of “What Becomes a Legend Most: A Biography of Richard Avedon” (Harper).