One exquisite song in Heidi Rodewald and Donna Di Novelli’s pop requiem, “The Good Swimmer,” repeats a list of rescue maneuvers: The Tired Swimmer Carry, the Saddleback Carry, the Cross Chest Carry, the Head Carry, the Hair Carry, the Fireman’s Carry. Each is a hold a lifeguard can use to save a victim from drowning. But this song cycle, seen in an earlier version in the 2016 Prototype Festival and now playing at BAM Fisher in the Next Wave Festival, is too opaque to pull most of us under. No hair carries required.

Several hanging scrims divide the Fisher stage. In front of them sit — and stand — nine musicians, including Ms. Rodewald, the composer and bass player, looking endlessly chic in a trim blue suit. Behind the scrims are a chorus of lifeguards, six men and one woman. About two-thirds of the way through the show, the men in the chorus exchange their swimsuits for dog tags and military khaki. Then a lifeguard chair is lowered. Under Kevin Newbury’s direction, that’s pretty much it in terms of action. 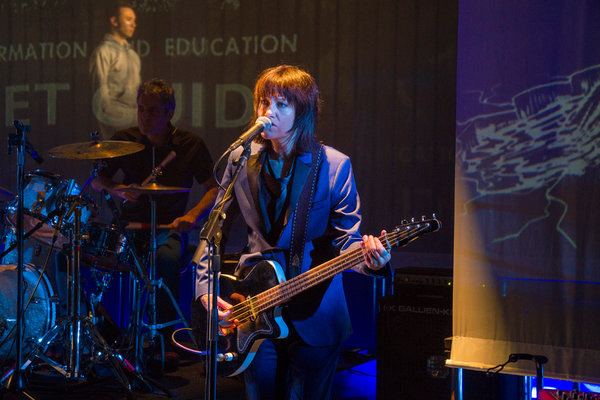 Ms. Di Novelli’s lyrics, pointedly abstract and occasionally resonant, are pulled from lifesaving manuals. There is also a recipe for a daiquiri and a report from a sonar expert. Because I’d read the show description a few times, I knew that it was about a lifeguard who couldn’t save her brother, a casualty of Vietnam. I never would have guessed this from the performance.

The lifeguards are hidden behind Greg Emetaz’s video design — mostly waves, book covers and ephemera. (Raja Feather Kelly’s choreography is similarly occluded.) The woman in the red one-piece (Sophia Byrd) is easy enough to pick out, but which man played her brother? No idea. The choral voices, too, are often lost in the splendid clamor of the instruments.

If you have seen “Passing Strange” or “The Total Bent,” Ms. Rodewald’s collaborations with her sometimes bandmate Stew, you’ll guess that the music she supplies is rich and rousing. The style is symphonic rock or chamber pop — strings, drums, keyboard, woodwinds and more that twine together in a sound that is undulating and lush. David Driver, nimble-voiced, is the lead vocalist. The orchestrations, which have a saxophone sound a note like a foghorn and a drummer trade his brushes for mallets, are cool and clever. (The people in the first two rows were offered ear plugs, but from the middle of the audience it never sounded too loud.)

Even while enjoying the music I began to hunger for some sense of character or plot. I felt a little ashamed of this — it seems childish to want to be told a story. But without a story, I couldn’t make the songs connect or accrete. Still it worked on some people. During a song that began “A typeface called Optima” — the font (I guessed, correctly as it turned out) used on the Vietnam War Memorial — I heard someone in an upper row crying quietly. Mostly I felt stranded on the surface, happy to float along, never in any danger of drowning.