For Alvin Ailey American Dance Theater to have lasted 60 years is an unlikely feat. Even more extraordinary: Almost half that span has elapsed since the death of Alvin Ailey.

How has the company survived? How has it preserved the spirit of its founder?

At the start of its program at New York City Center on Friday, the troupe offered rote answers to those entwined questions in the form of “Becoming Ailey,” an anniversary slide show of old photos and footage that tried to bring Ailey into the theater by projecting his image on a scrim.

And, at the end of the program, it presented the answer that has sufficed for six decades: Ailey’s “Revelations,” the masterpiece foundation of the whole enterprise and a visceral reminder of what the company encapsulates and why people keep coming back for it.

In between this material, though, came a stranger, riskier engagement with Ailey’s legacy: the premiere of “Lazarus” by the esteemed hip-hop choreographer Rennie Harris. In this hourlong work, Mr. Harris asks many deep questions, implicitly and explicitly, through voice-over text and song lyrics: questions about the “blood memory” that Ailey cited as the source of his choreography; questions about how to be a black man in a white world; questions that feel painfully urgent and personal.

A great strength of ‘Lazarus,’ but also a source of difficulty, is how it evades simple answers. Instead, it just keeps layering on more questions, more information. It is not easy to say, at a basic level, what is happening. There is a central figure, a kind of pilgrim of sorrow (played by Daniel Harder in the first cast) who might represent Ailey or his spirit or even Lazarus of the Bible (at one point, another dancer mimes removing wrappings from Mr. Harder’s face). But it’s not clear whether Mr. Harder dies and is resurrected or whether he’s in his mother’s womb, not yet born, listening to her breathing and heartbeat. 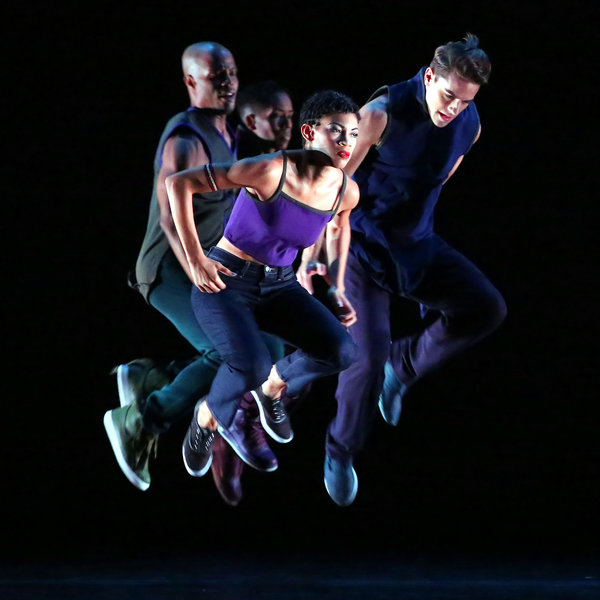 What much of the dance looks like is African-American history as a nightmare from which he is trying to awake. Images of terrible beauty coalesce and disperse. He and others are dragged, as if from a riot. Their hands, clasped in prayer, quake. Dancers around Mr. Harder tilt their heads, as if lynched. Across the stage they run, in slow-motion escape — or crawl, in mass migration — one or another rising in a spurt of anguish. Lying on their backs, they undulate their arms, suggesting a field where black people harvested some bitter crop. They might be holding Mr. Harper up or sucking him down.

That last image comes at the end of the first act. After an intermission that isn’t really necessary, the image repeats, arranged at a different angle. The first time, it’s accompanied by the searing voice of Terence Trent D’Arby in his track “As Yet Untitled” about bloodstained soil and rage, asserting, “This land is still my home.”

That’s one of many brilliant samples in a score by Darrin Ross that is rarely simple. Heartbeats, heavy breathing, gunshots, the barking of dogs, massed whispers, weeping, synthesized strings, fragments of spirituals and gospel moans come up against passages of tortured text by Mr. Harris (some of it sampling Kendrick Lamar). At wide intervals, there’s also music for dancing, with an irresistible beat.

When that music is going, Mr. Harris gives us something like heaven. The choreography is based on the Philadelphia style called GQ: rhythmically intricate footwork with a laconic upper body; off-kilter steps as if on a rolling surface; jumps that twist loosely in the air. The cool confidence of the style has a spiritual force that’s uplifting, and the pleasure of it is mixed with a revelation of the past in the present, of black history in the body language.

Mr. Harris honors that uplift, the expectations of an audience accustomed to the arc of “Revelations,” but he resists it, too. Bits of Nina Simone in the soundtrack announce a new day, a new life, but Mr. Harris ends the dance (after the first bows) with a seriously depressed coda, in which responses Ailey gave in long-ago interviews are used to answer the questions Mr. Harris has now.

Along with the score’s melodramatic strings and high-pitched piano notes, Mr. Harris’s text is the work’s weakest element, not nearly as eloquent and sophisticated as his choreography. But it is this text, in its unguarded searching, that underlines the work’s urgency. “Lazarus” brings Ailey back to life by showing why he still matters to a living artist of Mr. Harris’s caliber.