BERLIN — What’s a classic and why? The Russian ballet “La Bayadère” (1877) was largely unknown in the West until the 1960s, when its Shades scene was danced, out of context, by the Kirov (now the Mariinsky) and then the Royal Ballet.

The scene builds cumulatively, beginning with a slow, hypnotic, single-file entrance by the female corps de ballet, 32 women dressed in identical white tutus. In unison, these women — the Shades — dance the same to-and-fro phrase: a zigzag walk punctuated by a linear gesture forward into space and then a stretch back with arms making a halo around the head. The scene seems plotless, timeless, placeless, an Elysian echo-chamber: the 19th-century prototype of the 20th century’s many non-narrative classical ballets.

The choreographer Alexei Ratmansky’s reconstruction of “La Bayadère” for the Staatsballett Berlin, which had its world premiere on Sunday night, is the latest in a series of Western full-length “Bayadère” productions that, since 1980, have shown how the Shades scene fits into this stylistically patchy ballet’s melodramatic story of love, politics and religion set in pre-British India.

It’s also the latest in a recent series of Ratmansky reconstructions of late-19th-century Russian ballet classics. Like his “Sleeping Beauty” (2015) and “Swan Lake” (2016), it’s often revelatory. It does much to strip away the Soviet Russian distortions that have laden this classic with showy dance tricks, while significantly enriching our understanding of the art of its original choreographer, Marius Petipa (1818-1910) — mainly to the good, but not all. 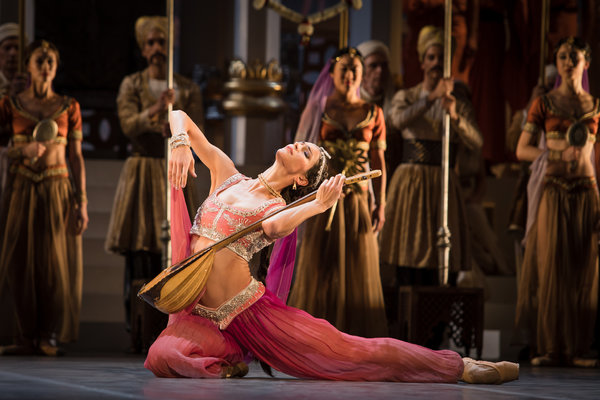 The Shades scene was the centerpiece of Petipa’s third act. During his day, the fourth and final act was often thought to surpass it. Today, however, there are large gaps in the historical sources for that act’s choreography; and tastes have changed. That conclusion’s intense drama makes a lighter impression than the Shades scene, which still seems astonishingly imaginative.

Where Petipa’s original allows, this Ratmansky “Bayadère” is a tightly coherent narrative drama. The Shades are the opium dream of the hero Solor — they multiply the essence of Nikia, his newly dead beloved — but it has seldom been so clear as here that they’re descending from the slopes of the Himalayas. The designer, Jérôme Kaplan, even makes the Shades, their arms swathed in cloudy white net, seem a continuation of the mists on his moonlit mountains.

These Staatsballett Shades enter fluently, faster than any other “Bayadère” corps I can remember (this tempo feels right for the music), and with wonderful phrasing. The ensuing scene makes more dramatic sense than ever: In one telling touch, Nikia and Solor simply walk together around the space, each holding both of the other’s hands, echoing an earlier walk they took in the temple.

Elsewhere Mr. Ratmansky restores a wealth of detail to Nikia, the title bayadère (or devadasi, a female temple dancer), who’s consecrated to the temple and its rituals. She also plays a lute, and must, at the ballet’s tragic crisis, dance while playing music in honor of Solor’s betrothal to the Rajah’s daughter Gamsatti. Solor, however, has sworn to love Nikia over the temple’s holy flame. This oath, like Nikia’s artist nature, has never been more potent as a motif.

Nikia herself is the one reason apart from the Shades scene that “Bayadère” may count as a classic. She’s both a victim and an avenger: Having lost Solor to Gamsatti in this world, she invokes the gods to bring about a devastating earthquake, so she can reclaim Solor in the afterlife.

At Sunday’s premiere, Nikia was danced by Polina Semionova (who has worked with Mr. Ratmansky at American Ballet Theater, where he is the artist in residence). Her whole body moves expressively; she effortlessly catches the tricky dichotomy of being an Indian dancer who goes to classical-ballet paradise.

Most of the Berlin dancers are excellent in mime. Some characters, like the ayah (Birgit Brux), attendant to Gamsatti, become newly three-dimensional. As Solor, Alejandro Virelles was stiff in acting though never wooden; in his final-scene wedding to Gamsatti, he admirably danced a stylish jumping variation reconstructed by Mr. Ratmansky.

Here the role of the dangerously vindictive Gamsatti becomes largely a non-dance role: even in her dance-laden betrothal scene, she remains a spectator. Then — surprise! — at her wedding she suddenly reveals a virtuoso-ballerina side. On Sunday, Yolanda Correa showed that she had both the poise and the technique to carry this off.

There are too few records for this final scene. There’s nothing even to tell us even what music Gamsatti danced her solo variation to. So Mr. Ratmansky gives her a familiar number (music and choreography) usually performed by Kitri, the heroine of another Petipa-Minkus ballet, “Don Quixote,” in its Vision Scene. True, such interpolations were not uncommon in Petipa’s day — but this one is still jarring.

Several other features make this production uneven. And some of these are surely the fault of Petipa and Ludwig Minkus, the original composer. (Minkus’s score, which has several trite passages, has been arranged here by Lars Payne and Gavin Sutherland.) Mr. Ratmansky, having unearthed several unfamiliar musical passages, fits the stage action to them felicitously. But the betrothal and wedding scenes are both bogged down by divertissements that are quaint at best. And the final scene’s score gives no support to Nikia as ghost. When she interrupts her rival’s wedding, the brass-heavy music makes no differentiation between her and Gamsatti.

At first viewing, there’s so much to see in this “Bayadère” that you can forget about this ballet’s central problem today: a cultural imperialism that, despite sumptuous scenery and costumes, gives us a coarse cartoon idea of Indian culture. Petipa’s four acts are played with just one intermission, but some scene changes necessitate uncomfortably long pauses. Though Mr. Kaplan’s backdrops are splendidly picturesque, the stage’s wings are designed like tawdry interior décor. Solor’s opium chamber works poorly as a place either to receive Gamsatti or to envision Nikia.

These flaws do not keep this production from being fascinating and impressive. This production, nonetheless, cannot solve the unevenness of “Bayadère” itself.

An earlier version of this article misidentified the date of the final performance in a production of “La Bayadère” at Staatsballett Berlin. It is Feb. 9, not Feb. 2.

La Bayadère
In repertory through Feb. 9 at Staatsballett Berlin; staatsoper-berlin.de.