Programming is tricky business. What should a ballet company bring to a city like New York, which already has plenty of offerings? For its first solo evening at Lincoln Center, the Hungarian National Ballet went with safe and sound: “Swan Lake.”

But was it really safe? No two “Swan Lakes” are exactly alike, and this one, created in 1988 by the Dutch choreographer Rudi van Dantzig, turned out to be more stale than sound: It was both dramatically peculiar and roughly danced.

Performed Wednesday night at the David H. Koch Theater, “Swan Lake” was a one-off. The company, directed by Tamas Solymosi, made its United States debut at a gala on Sunday, and will present two more programs: “Don Quixote” on Friday and a triple bill devoted to works by Hans van Manen, another Dutch choreographer, on Sunday. 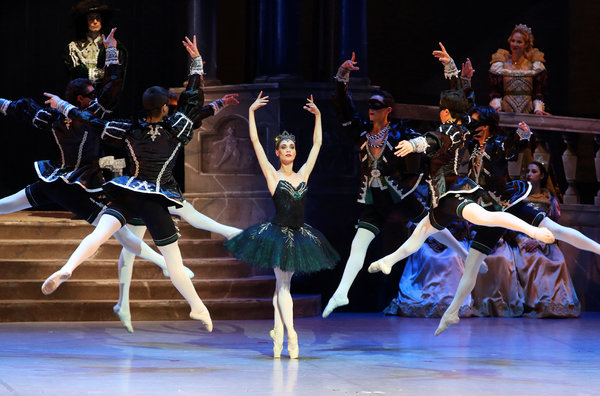 Mr. van Dantzig, who died in 2012, was known for creating dances with a social message; there’s a light touch of that in his “Swan Lake,” which clocked in at nearly four hours. In Act 1, we see that Prince Siegfried’s haughty tutor, Von Rasposen (Alekszandr Komarov), doesn’t want Siegfried (Gergely Leblanc) mixing with the local villagers. He also seems to have an aversion to the Prince’s best friend, Alexander (Dmitry Diachkov), a young man with whom Siegfried shares more chemistry than with any maiden or swan.

In Act 2, it becomes clear that Von Rasposen is a manifestation of Rothbart (Mikalai Radziush), the evil magician responsible for turning the princess Odette (Tatiana Melnik) into a swan. In the Act 3 ballroom scene, Von Rasposen and Rothbart share the stage and some of the credit for manipulating Siegfried into proposing marriage to Odile, Odette’s malevolent doppelgänger.

“Swan Lake” always requires a hearty suspension of disbelief, but the twists here are baffling. The mood is off too. “Swan Lake” is about a man who finds purpose and love and then squanders it, yet this rendition is passionless.

The swans in “Swan Lake” — their white feathers, the way they show their skin, their only-come-out-at-night existence — are the epitome of elegance and inherently sexy: They are the ballet world’s showgirls. But here, as throughout, the dancers hit the right marks without becoming swept up in the music.

Mr. van Dantzig’s choreography, imbued with oddities here and there, was repetitive and frequently unmusical; it seemed to unfold in slow motion, and the cast responded with hesitant, mannered dancing. Perhaps it was the pressure, but they seemed tense and disconnected — especially Ms. Melnik — and as they strived for perfection of line, they seemed to lose the art of actual dancing.

There were also quirks in the Act 3 folk dances, choreographed by Toer van Schayk. (He also designed the set and costumes.) The prospective brides for Siegfried had more character development than usual, especially in the case of one hopeful (Emi Uehara), who had to be pushed onto the stage; she was bashful and then danced her heart out. One of the Spanish dancers, Lea Földi, seemed to know Rothbart from outside of the ballroom (they shared a kiss behind his hat); and Odile, at the start of her seduction scene, danced with six men in masks. In all, it was more fussy than inventive.

Rothbart — dressed in green scales and looking like a sea creature in a drag show — made for a perpetually grim sight. His movement extended little beyond a furious flap of the wings and a scissoring leap. And his stage time was, let’s say, abundant; if he wasn’t cutting in between the swans, he was poised on a cliff directing their movements.

As for Siegfried and Odette? In the end, their connection was tenuous. Mr. Leblanc, handsome but remote, seemed more drawn to the swirling harmony of the swans than to any one swan in particular. When Odette departed for the last time and he drowned in the lake, who was there to retrieve his lifeless body from the waves? Alexander. Odette never had a chance.

Jana Kramer on her ‘abusive’ ex-boyfriend: ‘He was going to kill me’

Everything You Need to Know About the Justice Tarot Card
Celebrities

Will the Sussexes sell their Montecito mansion & move to Hope Ranch?