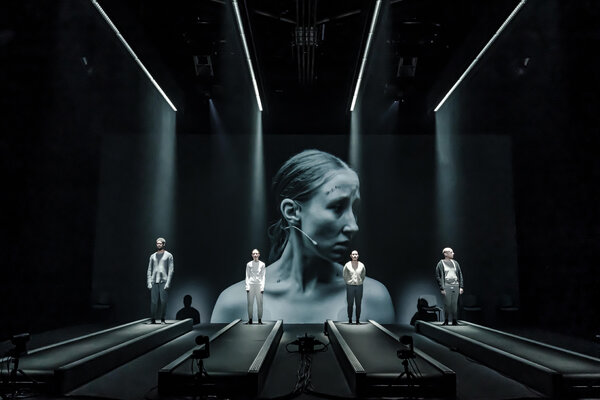 Ready for the most shocking part of Sarah Kane’s “Crave,” a throat punch of a play livestreamed by the Chichester Festival Theater through Saturday? Here it is: a live audience. In the minutes before “Crave” began, remote spectators could watch as actual (masked) theatergoers took socially distanced seats. Earlier this week, I turned my computer volume up, the better to listen to the endangered language of hushed conversations and rustling programs, my personal pathway to A.S.M.R.

Those sights and sounds will disappear on Thursday, when a renewed lockdown will again shutter live theater in England. But for a handful of days, you could know that Kane’s particular vision of misery had row after row of company.

Then again, Kane, an English playwright who hanged herself in 1999 while hospitalized after a suicide attempt, may be all the company you need. In her wrenching, austere, bleakly comic works, the world — interior and exterior — is always, already burning. If yours feels on fire, too, her 1999 play, “Crave,” is just the timed ticket.

A quartet for four voices, “Crave” provides dialogue for four characters, identified in the script as C, M, B and A. They are played here, under Tinuke Craig’s precise, minimalist direction, by Erin Doherty, Wendy Kweh, Alfred Enoch and Jonathan Slinger. The actors first appear in low light and only gradually assume form, standing at the edges of four identical treadmills, dressed in varying shades of gray. (Alex Lowde did the design.) On the screen behind the actors, hands materialize, then arms, shoulders and heads, sometimes filmed in negative. 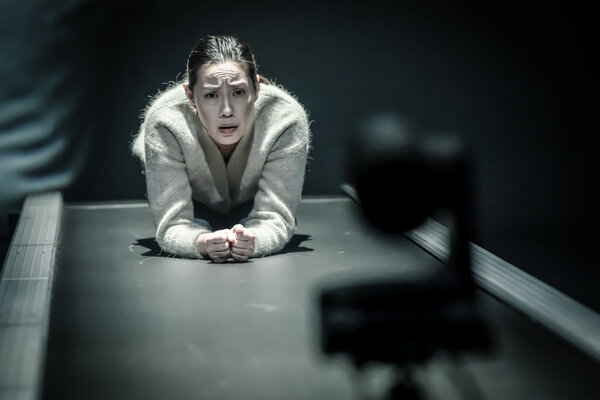 Voices appear before faces do, reciting short, staccato lines — koans absent of Zen — that form a bitter music. “If I could be free of you without having to lose you,” one says. “You can only kill yourself if you’re not already dead,” says another. The actors, Doherty particularly, can pack a wealth of ruin into just a few consonants and vowels.

The voices sometimes echo each other or, more rarely, speak chorally. Eventually, characters begin to suggest themselves: an older woman and a younger woman, an older man and a younger man. While the actors never look at or speak directly to one another, the outlines of relationships emerge, most of them unhappy.

“Crave,” as the name suggests, is a play about desire’s double edge. Wanting — food, warmth, shelter — keeps us alive. Darker drives imperil that life, or make it feel not worth living. Love — despised, longed for — balances on the tip of that knife. “Only love can save me, and love has destroyed me,” one character says.

A meditation on power and powerlessness, “Crave” is about being trapped in the straitjacket of your own yearning body and the shards of your own splintered consciousness. It’s solipsistic, yes, but navel-gazing only if you understand the blood, muscle, fat and viscera tangling just under that belly button. Pricked ears will hear allusions to Shakespeare, the Bible or Plato. But Kane’s obvious stylistic forerunner is Samuel Beckett, though she never veils desolation in allegorical trees or ashcans.

Kane has a way of making specific devastation feel universal and totalizing. So honestly, it was some relief to see “Crave” through a screen rather than face that absolute anguish live. Those masked theatergoers are brave, for reasons beyond the pandemic. The actors are brave, too. During the 50-minute play, each runs an emotional marathon. And a mile or so on those treadmills.

Whether you consider “Crave” the best show for this moment of one of the worst likely comes down to whether you want art that works to understand the world or that helps you to escape it. Most days I don’t know what I want. But when the treadmills stilled and the lights came up, I did something I hadn’t done in a while. I got up out of my broken desk chair and I applauded.