PURCHASE, N.Y. — A pair of loosely staged, early-19th-century Italian operas in Westchester County: At first glance, Will Crutchfield’s fledgling Teatro Nuovo company, which performed this weekend at Purchase College, has a lot in common with his Bel Canto at Caramoor series, which ran for 20 years, just 17 miles north.

But a funny thing happened on the road to Purchase. Mr. Crutchfield became a kind of headmaster, rather than just a conductor. In Teatro Nuovo, now in its second summer season after the farewell to his Caramoor series in 2017, he has established an unofficial academy — or call it a boot camp — of bel canto, training a rising generation of performers in what he considers an endangered art.

Rather than the veteran Orchestra of St. Luke’s, the resident ensemble at Caramoor, Mr. Crutchfield now fields a handpicked, very young period orchestra with an unconventional conducting setup and arrangement of players. He and a faculty of coaches school the musicians and singers in the fading forms of idiomatic ornamentation and phrasing.

And, in what may be the most happy change for those who grew tired of traipsing back to New York City from Caramoor after a long performance, year after year, the operas will be reprised at the Rose Theater at Jazz at Lincoln Center — Bellini’s “La Straniera” on Wednesday, and Rossini’s “La Gazza Ladra” on Thursday.

The opportunity should be grabbed to hear one or both; neither comes around often, and Teatro Nuovo’s versions have both spirit and polish.

Neither offers a good time: “La Straniera” is a farrago of veiled identities and vexed love, and in “La Gazza Ladra,” a happy ending barely lightens the agonizing spectacle of a woman brought to the brink of execution after being unjustly convicted of a petty theft. But at Purchase, the emotions were honest, without overplaying, and the singing was stylish, with an unforced virtuosity that’s all too rare in performances of this repertory.

There was a novel aspect to the music-making, which Mr. Crutchfield has based on period models. It is odd to be greeted, in the audience, by a row of violinists facing away from you across the pit; they, in turn, face the rest of the violins, seated in another long row. The other strings are divided on opposite sides of the orchestra; the woodwinds, sounding mellower and woollier than modern instruments, face one another.

The notion is that this setup encourages a less centralized, more collaborative style of performing. Everyone, ideally, breathes together; players look to one another, and even to the singers, more than to a single looming conductor from whom the interpretation solely emanates.

As for Teatro Nuovo’s conductors, depending on the moment their number ranges from zero to two. The concertmaster, Jakob Lehmann, tends to keep the instrumentalists in line, with a fortepianist — Mr. Crutchfield in “La Straniera” and Rachelle Jonck in “La Gazza Ladra” — in front of him directing the singers from the keyboard.

The talented casts include a pair of ardent tenor love interests — Derrek Stark in “La Straniera,” Oliver Sewell in “La Gazza Ladra.” The soprano Christine Lyons, as Alaida, the melancholy stranger of the title of Bellini’s opera, dealt capably with the bursts of fury that end each act, her voice blossoming down into its depths. And the bright-voiced soprano Alisa Jordheim was a persuasively vulnerable Ninetta in the Rossini.

Best in show, both of them, was the mezzo-soprano Hannah Ludwig as the faithful friend Pippo in “La Gazza Ladra.” Her tone chocolaty and large, yet with focus and agility, she captured the integral aspect of bel canto, the skill — or perhaps intuition — Mr. Crutchfield is trying to impart: expression emerging from a long, intelligently shaped musical line.

“La Straniera” on Wednesday and “La Gazza Ladra” on Thursday at the Rose Theater, Jazz at Lincoln Center; teatronuovo.org. 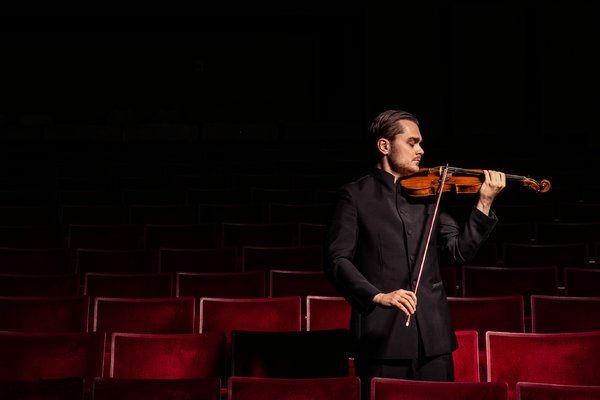 Zachary Woolfe has been the classical music editor since 2015. He was previously the opera critic of the New York Observer. @zwoolfe