If you think of the latest edition of Ensemble Studio Theater’s annual marathon of one-act plays as a five-course dinner, it makes sense that the program opens with a tasty hors d’oeuvre like Susan Kim’s “Privilege,” and concludes with a filling dessert in Cayenne Douglass’ “Oh My, Goodness.”

Sprightly directed by José Zayas, “Privilege” takes place in the upscale living room of a couple simply named A and B (Laura Gómez and Ana Grosse), who discuss the topics of the moment with their friends C and D (Dalia Davi and Satomi Blair).

Are opinions as worthy as reporting? Are people as desperate for money as they say? They wonder. Then A brings up a quandary straight out of “The Twilight Zone”: What if you could push a button and get all the money you wanted, but someone, somewhere, dies? Existential questions, and wine, keep flowing as the four women debate the options.

Series B of the marathon — jointly presented by the theater and Radio Drama Network — continues as the lights go down and the space is transformed into the corporate-office setting of Carole Real’s “The Guard Will Escort You to Ruff-Ruff.” (Frank J. Oliva handled the efficient set design for all the pieces.)

Bright-eyed temp worker Cindy (Mandy Siegfried) arrives for her first day at the Kitty-Kat Co., where she will be reviewing audits looking for potential violations in the Chinese factories where they manufacture their products. This overachiever soon realizes there is a lot to be fixed, but her lax supervisor Brian (a hilarious Jonathan Randell Silver) constantly dismisses her concerns.

Less “Hello, Kitty” and more “Erin Brockovich”-meets-“Zero Dark Thirty,” the play becomes an allegory for American intervention abroad. The director Will Pomerantz perfectly captures the ease with which bureaucratic negligence can lead to horror, and the impotence that comes with realizing how easily we can brush aside problems that are invisible to us.

Amanda Quaid’s “The Extinctionist” tells the story of a couple (Sharina Martin and Sean McIntyre) who discuss the pros and cons of having children. Elements often work better individually than as a whole — Mr. McIntyre’s arc in miniature is chilling — since the playwright relies on didacticism more than emotion. 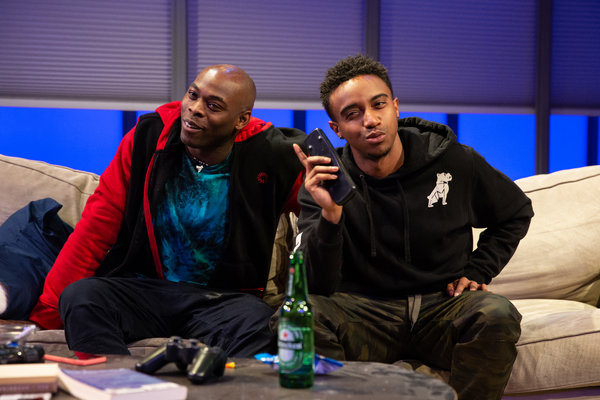 After a 15-minute intermission comes what turns out to be a scrumptious main course. Harron Atkins’s “Tempo” takes place in a college dorm where best friends Dom (Wesley T. Jones) and Jay (Cecil Blutcher) discuss dating, candy corn and “Twilight.” Dom is gay, Jay is straight, and romantic undertones arise as the two engage in casual rituals that brim with sensuality.

There’s a twist. It turns out we’re seeing one of Dom’s memories, as he uses an Alexa-sounding app called Tempo which allows its users to revisit — and, for a premium fee, to modify — what they remember.

The chemistry between Mr. Jones and Mr. Blutcher is sizzling, and Colette Robert’s delicate direction turns what might have felt like molecular cuisine into theatrical comfort food.

In “Oh My, Goodness,” a lonely driver named Debra (Margot White) making her way from Virginia to New Jersey, where she plans to kill herself, calls a suicide crisis line. Tom (Zach Grenier, of “The Good Wife”) is on the receiving end.

The actors stand on opposite sides of the stage yet their characters establish a bond that reminds us of the way technology sometimes creates extraordinary connections.

William Carden, the director, isn’t afraid to delve into the darkness of depression. Debra survives, but the last scene’s bittersweet tone lets us know this won’t be the last time she makes such a call.

When you purchase a ticket for an independently reviewed play or musical through our site, we earn an affiliate commission.