This much we knew by Tuesday night: at the electoral level, at least, the divide between American cities and its hinterlands seems deeper than ever, with urban and rural having become almost synonyms for blue and red.

The surprise that initially greeted this entrenched polarization reinforces, all too well, the thrust of the current exhibition at the Solomon R. Guggenheim Museum: that the true terra incognita is outside of town. “Countryside, the Future,” organized by the Dutch architect and theorist Rem Koolhaas, argues that architects, intellectuals and politicians have focused on metropolitan life to the point of myopia, and have missed convulsive changes — demographic ones, political ones, technological ones — in sparsely populated regions.

Five years in the making, “Countryside” opened on Feb. 20 and closed three weeks later because of the coronavirus pandemic. The show is almost devoid of architecture as such, and instead examines the design history of nonurban areas through assemblages of historical propaganda and contemporary advertisements; torrents of agricultural statistics; and showcases of robotic tractors and crop-seeding drones. As my colleague Michael Kimmelman wrote upon its opening, it has “something of the aesthetic of an old Soviet World’s Fair pavilion,” though the cacophonous exhibition design draws as much from today’s meme culture as from yesterday’s trade expositions. 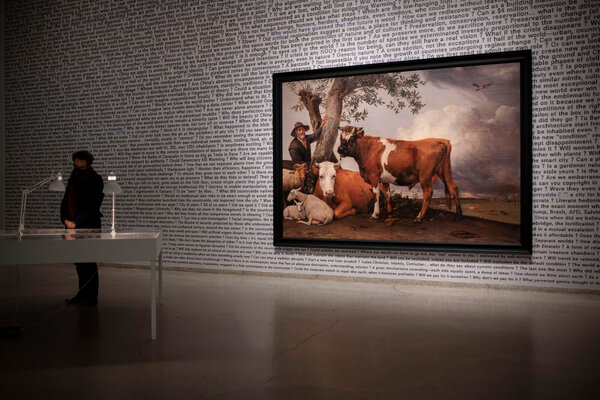 It elicited almost universally negative reviews. What was this, some Prada-sponsored Dutch remake of “Green Acres”? Who do you think you are, jumping on the work of real scholars and the lives of real country folk? And why are you addressing only an urban public … in a show on Fifth Avenue?

Well, not for the first time, events have proved Mr. Koolhaas prescient, and both health and political crises have strengthened the show’s suggestion that the city is yesterday’s news. I didn’t love “Countryside” either at first, but, back at the Guggenheim for the first time since March, I found myself more impressed than before with the show’s attention to new forms of rural life — especially the digital technologies that are transforming the countryside, and the massive warehouses and robust delivery systems reshaping rural and urban economies alike.

It plainly remains a messy, random, arch, inconclusive exhibition, and brings the same dispassionate — or cynical — gaze to the countryside that Mr. Koolhaas applied earlier to Chinese urbanization, to the mixing of art and commerce, and to the use and misuse of architectural preservation. There are shallow, cherry-picked assemblages (like a collection of Vogue covers shot in the provinces, featuring Rihanna frolicking in a wheat field) and weird detours (two whole bays on gorilla habitats?). A major blind spot is the exhibition’s indifference to Indigenous populations, and their past and contemporary management of land.

Where it succeeds most is in its insistence on the cosmopolitanism and dynamism of the countryside — where things can happen faster, and ambitions can be greater, than in the stultified cities of the West. Our theaters and nightclubs are gone, municipal shortfalls look certain, and urban-refugee parents are infiltrating the P.T.A.s of farm-country elementary schools. Is it perhaps not time, as Chairman Mao might say, for a return to “Countryside”?

Along the winding museum ramps, Mr. Koolhaas and his team — including Samir Bantal, Troy Conrad Therrien, and three columns’ worth of credited collaborators and students — hopscotch from Siberia to Kenya, from the Mojave Desert to the Japanese mountains, to correct the architectural profession’s urban monomania. The show presents Nazi, Soviet and Maoist agricultural development plans, tacitly admiring their scale and ambition, briefly noting the millions of dead bodies that accompanied them.

There are the socialist schemes of Charles Fourier, who designed self-contained utopian societies for work, study, farming and sex. Visions of Roman villas and Chinese literati gazing at mountains give way to back-to-the-land hippiedom circa Ken Kesey, then to wellness retreats and the eco-bunkers of catastrophist millionaires.

Certainly New Yorkers’ revaluation of the countryside had begun long before the “Decameron”-style outflows of remote-working urbanites and their families, fleeing the coronavirus last spring. (No point denying that I was one of them. Born in New York, I spent more time in the countryside this year than I have in my entire life, holing up in rural Massachusetts and driving past farms with an equal distribution of Black Lives Matter and Make America Great Again yard signs.) The phrase “farm to table” has been a cliché for years, and Park Slope idealists long ago exported their Marie Antoinette rural fantasies to the Hudson Valley.

Yet the pandemic — now scything through sparsely populated regions as much as dense ones — has judderingly accelerated new encounters between the city and its outskirts. Everyone from the farmers’ market to the real estate brokerage can tell you that the arrival of high-speed broadband in the countryside has flattened the space between urban and rural. Add now the pandemic’s crushing of in-person work, and your life in a Vermont forest or a Barbadian beach town might not look so different from your life in town.

After all, the same digital commerce that has destroyed your Jane Jacobs-approved urban neighborhood has also made possible a whole new life in the countryside, smoothed by just-in-time logistics software, enlivened by deliveries by drone. “What perverted genius thought of the name ‘fulfillment center’?” asks Mr. Koolhaas in an early gallery.

Near the end of “Countryside” is a rapturous paean to the Tahoe Reno Industrial Center, in the Nevada desert — said to be the largest industrial zone in the world — whose enormous, windowless warehouses shelter the logistics operations of Walmart, Google, FedEx, and the Pioneer Nut Company. In this deregulated paradise, perfected by algorithms and staffed by robots, the Dutch architect finds a post-human architecture more innovative, and pitiless, than anything back in town. One of the show’s most bitter jokes is a mural-size photo of Mr. Koolhaas’s unmistakable bald head gazing out on the warehouses, in the same rearview pose as Casper David Friedrich’s famous “Wanderer Above the Sea of Fog.” The desert factory, not the megacity, offers the best view of the capitalist sublime.

Perhaps the strongest sections of “Countryside” are devoted to China, with several case studies of villages transformed by new logistics technology and digital commerce platforms. One town has become a leading producer of Ikea-knockoff flat-pack furniture; another has raised living standards by selling organic pumpkins to lodgers in renovated stone houses. (Students at Beijing’s Central Academy of Fine Arts did the research here.) Rural farmers sell apples fresh from the tree on the social network Kuaishou, the country cousin of TikTok. There’s even a replica of the desk of a Chinese provincial official, backed by a film extolling President Xi Jinping’s youth in the Shaanxi countryside.

It was, of course, Mr. Koolhaas’s firm that designed the Beijing headquarters of Chinese state television a decade ago, and mock-Maoist echoes of the Cultural Revolution ripple through this exhibition: intellectuals “learning from the countryside”; bureaucrats sent down to the farm. Its undisguised admiration for Xi’s China, not to mention its almost nostalgic gaze on colonial expansion and Soviet development, doubles down on Mr. Koolhaas’s nonideological esteem for world-reshaping ambitions. “This is what we have lost in the disaster of the modern project: the ability to think big,” he wrote a quarter of a century ago in “S M L XL,” his doorstop book with Bruce Mau.

I’d suggest that the critical drubbing “Countryside” initially received bespeaks a total exhaustion with such grand efforts, and a sense that — for young audiences especially — today’s overlapping emergencies have invalidated the ironic distance encapsulated in that photo of Mr. Koolhaas looking out over the Nevada industrial park.

And yes, there is something dated in Mr. Koolhaas’s go-big approach, and careless in its omnivorous, oversaturated walls of Googled “research” outsourced to architecture students. Certainly this show’s sections on Chinese localism, or Kenyan microfinance, or the physical architecture of the internet, have already been studied far more rigorously elsewhere. Certainly this nail-biter of an election should leave all of us skeptical of the generalizations urban observers make of country life.

But I am not so sure — and I say this as a journalist, Mr. Koolhaas’s first profession — that the always-online urbanites fed up with his irony and affirmation should be so proud of themselves, either. He may have a fatalistic acceptance of the world Xi Jinping and Jeff Bezos have forged, but his cool gaze and his critics’ disdain for big pronouncements do not come from such different places. What “Countryside” does is take seriously the contention that all avant-gardism gets commodified, that dissent is always co-opted, and that under such conditions you might want to get out of town. “More than ever, the city is all we have,” he wrote in “S M L XL.” We don’t even have that anymore.