R&B has been tussling with hip-hop for around three decades, and depending what lens you’re looking through, has been either roundly defeated or sneakily triumphant.

As hip-hop rose to prominence in the late 1980s to the mid-1990s, it began to view R&B as a partner, sometimes willing, and sometimes not. There were collaborations between rappers and singers, devised to bridge the culture and generation gaps (think Jody Watley and Rakim). And hip-hop aggressively borrowed soul melodies via sampling, as exemplified by Bad Boy Records. But by the turn of the century, as hip-hop officially took its place at the center of pop innovation and mainstream dominance, R&B began to feel like a footnote. Young stars like Trey Songz and Ashanti aligned themselves with hip-hop, a strategy of survival but not of confidence. Ultimately, it reduced the R&B — once the center of black social and political culture, and the conduit that brought the energy of sacred music into the secular realm — to an accent.

In the mid-to-late 2000s, singing became a full-fledged part of hip-hop, owing to the success of Drake, one of the first stars — Lauryn Hill got there earlier — who toggled cleanly between rapping and singing and understood them as variations of each other, not oppositional forces. Rappers are singers now, to the point where the framework of singing has been refracted almost wholly through the needs of hip-hop. Post Malone is a singer. Swae Lee is a singer. Young Thug is a singer. Quavo is a singer. And to varying degrees, they’ve imbibed lessons from R&B. Finding someone who solely raps, in the classical sense, in the mainstream is becoming increasingly rare.

Not all hip-hop singers are mining R&B traditions; Juice WRLD works in a style derived from pop-punk, as did XXXTentacion. But if R&B was a bit player a decade ago, it has at times felt like a ghost in the years since.

Which is why the resurgent swell of the genre in recent years has been so welcome. Thanks to the internet, younger artists — emerging from platforms that privilege intimacy and make room for idiosyncrasy — have been able to negotiate the genre’s new terms out of the long shadow cast by hip-hop. The last year especially has seen a robust collection of new talent committed to the genre’s core principles, more inheritors of the moody trances of the Weeknd or the tense sketches of Frank Ocean than of the muscular sensualists like Usher and Mary J. Blige, who have thrived in the hip-hop era. And so even while hip-hop is awash in performers who channel lessons from R&B, this new wave of R&B singers — the seven below are merely a sampling — has made the preservation of its turf a priority. 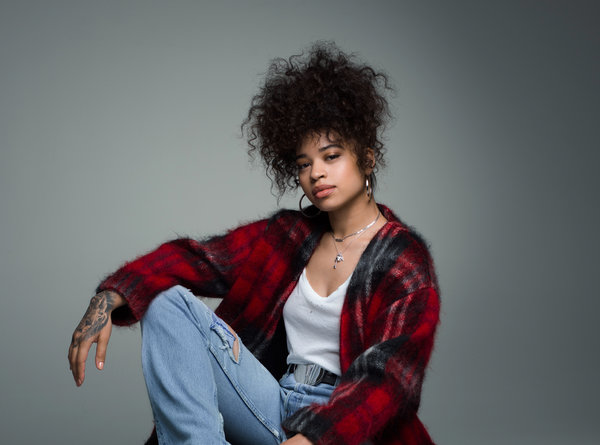 The most vivid demonstration of R&B’s triumphant untethering from hip-hop came this summer, when Ella Mai’s “Boo’d Up,” a sterling, sturdy, 1990s-redolent hit, was heading toward its peak. Perhaps in anticipation of the track’s eventual downturn, a remix was released featuring a pair of rappers, Nicki Minaj and Quavo, which perhaps was designed to turn the singer into the side dish on her own song. Unimaginative and unwieldy, it distracted from the song’s vivid core, and largely faded from view while the original persevered, becoming one of the defining singles of this year.

This British singer followed up with a sleek and understated slice of piano soul, “Trip,” which was almost as effective as the soothing sprawl of “Boo’d Up.” Both songs move at a slow ticktock, underscoring the way she drags syllables across the beat. She’s a terse singer, not an ostentatious vocal powerhouse.

Ella Mai signed to the imprint of the producer Mustard following a stint singing covers on Instagram. Her self-titled debut album, which was released last month, emphasizes a fealty to the early-to-mid 1990s, when hip-hop was first making its presence heavily felt in R&B, but hadn’t yet wrestled it into submission. She channels the sweetness of that era on “Shot Clock,” flirts with new jack swing on “Dangerous” and on songs like “Cheap Shot” and “Close,” delivers vocals that are husky but fluid, at a pace that’s calm and unhurried.

Ella Mai’s steady cool has a partner in the confident ooze that marks Jorja Smith’s singing. Smith, who is British as well, released her debut album, “Lost & Found,” in June. It underscored her gifts as a storytelling singer — the regretful “Teenage Fantasy” is a high point — with a voice that cleanly reconciles the stern and the sensual, as on “Wandering Romance.” The production moves with the fierceness and certainty of a thunderstorm, and sometimes verges on the glum; throughout, there are echoes of the earthen club music of Soul II Soul. Mostly, it serves as ballast for Smith, but when she’s set free, accompanied only by guitar on “Goodbyes,” her voice is lithe, vibrant and moist like a fresh wound.

“Sick to my stomach, four in the morning, I can’t sleep/In and out the city, worried ’bout where you may be,” H.E.R. sings at the beginning of “I’m Not OK.” Her presence is reverent, as if in prayer, and cloaked, as if in hiding. H.E.R. — born Gabriella Wilson — has an uncommon fortitude to her singing on her two-part “I Used To Know Her” set of EPs. (The soberly tragic second part bests the first.) Her palpably grounded soul nods to the elegance of quiet-storm 1980s R&B and the eyes-shut earnestness of the folky soul of the mid-1990s. And she chooses arrangements that provide stark shadows, but little interference, because her words are pointed. In her deft hands, meditations become anthems.

There is a slice of R&B that privileges texture and viscosity over lyrics, in which the voice is deployed as pure feeling far more than as a narrative tool. This is the style favored by the young singer Sabrina Claudio, who — inspired by the pacing and reserve of Sade — makes R&B that’s fully submerged, oceanically grand and catch-your-breath slow. “No Rain, No Flowers,” which was released in August, makes few concessions. It presumes a willingness to commit to a fully absorptive environment. Claudio’s sighs are a flexible tool — at different moments they signal desperation, or lust or even an exhaustion that tends toward numbness. But she’s most effective when, on “Messages From Her,” those sentiments converge, a reminder that they’re really not that far apart to begin with.

For the last couple of years, the path to musical success has run through social media — not only because it’s an alternate distribution mechanism, but because emerging stars rise quickly on those platforms, and sometimes need a proper, monetizable talent to accompany their fame. (See also: Bhad Bhabie, Cardi B.) Queen Naija is the first soul star of the social media generation. She first found an audience as one half of a YouTube-vlogging married couple that collaborated on music, among other things. As her relationship began to crumble, she wrote music of her own, thriving on songs that deliver the same forthright narratives that worked so well for her online.

“Medicine,” her breakthrough hit, is a lightly comedic tale about infidelity and the cycles of pain it causes. It’s the tone-setter for her impressive self-titled debut EP, which was released in July, and is full of songs that rely heavily on narrative. And while aggrievance is her best mode, as heard on “Karma,” she’s also convincing on the gospelesque “Mama’s Hand,” about the raw thrills of new motherhood. Throughout the EP, you can hear the arc of her recent tumult — her old relationship ended in divorce, and she’s moved on with a new partner. They’re expecting a child together, but more crucially, they’ve got their own YouTube channel. Follow along.

On each song on “Volume 1,” the debut EP from the rising R&B singer Pink Sweats, the first element that communicates real feeling is a guitar, picked with sadness and regret. His lo-fi songs propose that an R&B Lothario can be a lonely singer-songwriter, someone who’s assured but also alienated. “You say it’s Bonnie and Clyde but I feel like Bobby and Whitney/ Don’t know if you ride for me or if you riding against me,” he laments on “Would You,” in a voice that’s sweet and breathy but that also telegraphs uncertainty. Most Pink Sweats songs are spare — the ornamentation comes in the storytelling, which is vivid and direct, communicating a great deal via impressionistic detail. The luscious and caressing “Cocaine” and the stark, Weeknd-esque “No Replacing You” both capture the aching tragedy of a life lived on the wild side, but Pink Sweats doesn’t play it for cheap thrills. He absorbs, internalizes, and then whispers his hurt.

Most of the aforementioned music proactively ignores hip-hop, and doesn’t bother finding common ground to ease its path toward the mainstream, or to the radio — it avoids the conundrum of compromise. But there are still a handful of soul singers who choose a more accommodationist route and manage not to lose themselves in the process. Jacquees, signed to Cash Money Records, and a longtime collaborator with various rappers, is exactly the sort of singer who’s been sidelined in the last decade, reduced to a foil. But what’s clear on “4275,” his debut album after years of mixtapes and guest appearances, is his unwillingness to be pigeonholed, and also the specificity of his vocal gift, which is far more reminiscent of the gentle singers of the 1980s than the wrestlers of the hip-hop generation.

“4275” — which was released this summer, then rereleased in an expanded version in September — is a bracing album. Jacquees is a flamboyantly talented singer, nimble and calm. It’s clear from his subject matter and phrasing that hip-hop in his DNA. But despite the raw content of his songs, he sings with rigor and conviction — he’s an R&B purist at heart. And even though there are rapper collaborations here, the more meaningful endorsements come from older R&B stars — Donell Jones, Trey Songz, Jagged Edge, LaTocha Scott of Xscape — who come through to anoint one of their own.