WINDSOR, England (Reuters) – The gown worn by Britain’s Princess Beatrice at her scaled down wedding two months ago goes on display to the public on Thursday at Windsor Castle where her “secret” marriage took place.

Beatrice, Queen Elizabeth’s granddaughter, tied the knot with Edoardo Mapelli Mozzi at the castle to the west of London in July in a private ceremony without the usual pomp and fanfare that royal weddings usually attract.

The couple had planned to marry in May but the coronavirus lockdown, which restricted the number of guests, forced them to reschedule and have a low-key ceremony instead which was only attended by close family including the 94-year-old monarch.

For the occasion, Beatrice, 32, the elder daughter of Prince Andrew, the queen’s second son, and Sarah, Duchess of York, wore a remodeled taffeta, ivory dress designed by Norman Hartnell which Elizabeth herself first wore in the 1960s and loaned to her granddaughter for the wedding.

The ninth-in-line to the British throne was reunited with her dress at the castle on Wednesday for a photocall to publicize the upcoming display.

“This royal wedding dress is particularly unique because I think it’s the first time in royal history and certainly in modern royal history, say from the 18th or 19th century onwards, that an existing dress … has been reworn and turned into a wedding dress,” said the display’s curator Caroline de Guitaut. 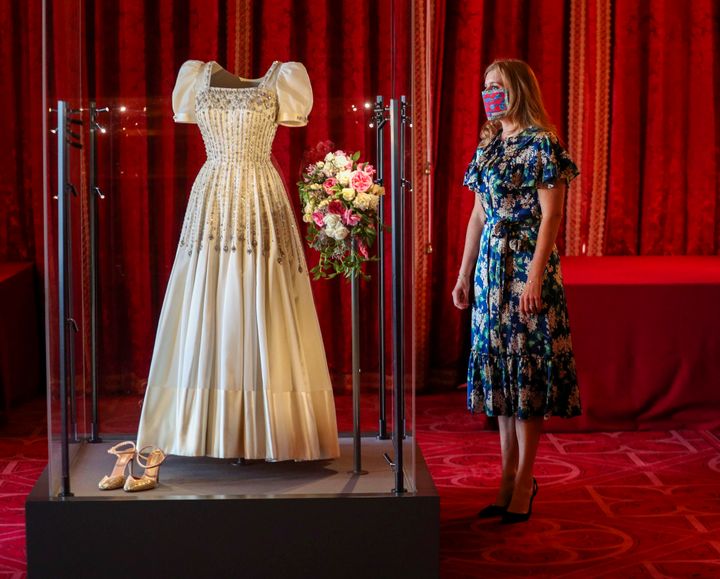 Also to go on display at Windsor will be Beatrice’s wedding shoes, made by Valentino, and a replica of her bridal bouquet. However, the Queen Mary diamond fringe tiara, which the queen wore for her own wedding in 1947 and lent Beatrice for the day, will not feature.