A joyous jumble of 60-plus shows in five boroughs, it is a reminder of photography’s power not just to document crisis, but to help imagine better lives.

Visitors to Photoville, the annual photography fair, on Water Street at Brooklyn Bridge Park in Dumbo on Sunday. The sprawling fair will be extended through Nov. 29.Credit…Gabby Jones for The New York Times

The container village is gone. Photoville, the pop-up fall festival that turns the waterfront under the Brooklyn Bridge into a friendly encampment for photography buffs and the general public, has dispensed in its ninth year, for coronavirus reasons, with its architectural signature, converted shipping containers.

This year’s edition, optimized for social distancing, takes place across five boroughs. All 60-plus exhibitions, with some 300 artists, are presented as high-quality digital prints on weatherproof banners. The bulk are in the usual area, in Dumbo, and on the nearby streets and piers of Brooklyn Bridge Park, but there are also satellite presentations throughout the boroughs of projects whose photographers and subjects have local connections. This new initiative is laudable but frustrating, as most of the remote sites (stretching from Soundview Park in the Bronx to South Beach Promenade on Staten Island) show only one project. So some excellent work feels marooned far from the main exhibition. 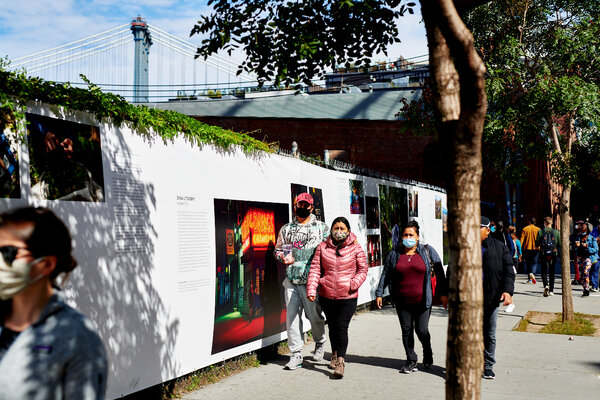 There is time to explore it all, however, as the festival will stay up longer than usual, until Nov. 29; a busy program of online events runs through Oct. 10.

Photoville is always a joyous jumble, embracing conceptual and narrative projects along with photojournalism. These are non-selling exhibits presented by the Photoville nonprofit itself and by numerous foundations, city agencies and educational, corporate and media partners (including The New York Times). This year’s presentation is a strong vintage: While meeting the many urgencies of this moment of acute, overlapping crises, it also opens up, in relevant ways, to wider views.

The pandemic is present, of course — for instance in Laylah Amatullah Barrayn’s “Portraits From the Pandemic and the Uprising,” made in Minneapolis and Brooklyn; in Kiana Hayeri’s documentation of migrants stranded at the closed Iran-Afghanistan border; and in Ziyah Gafic’s work on the Croatia-Bosnia frontier. Haruka Sakaguchi’s project is a standout: She has overlaid portraits of Asian-American New Yorkers on photographs of city locations where they experienced racist abuse over Covid-19, and added a text narration about each incident. On a lighter note, Marvi Lacar and Ben Lowy offer “ABC(orona),” a humorous alphabet of home life during confinement (sample entries: Haircut, Netflix, Parenting Fail).

But most people have been saturated for months with pandemic images, including their own experiences — and, for many, their losses — and Photoville wisely does not seek to overwhelm further. Most of the artists’ projects on view were not rapid-response work but have matured over years. The topics they raise, from war and environmental degradation to the dignity of all people and their entitlement to joy, are a reminder of photography’s power not just to document a crisis but also to imagine better lives through perspective and poetry.

Here is some of the work that compelled my attention, with the caveat that I did not make it to a couple of the remote locations, and that a few projects were not yet on view when I visited.

From 2017 to 2019, Ana Maria Arévalo Gosen photographed and interviewed women in Venezuelan prisons, where many can languish for months or years without trial on vague charges like “terrorism.” Ms. Arévalo, a Venezuelan photographer based in Spain, documents the cramped, squalid facilities, the improvised furnishings, and most of all, the sense of endless waiting, in solo and group portraits that feel more intimate than intrusive.

From afar, the rectangular form on one of the Dutch photographer Suzette Bousema’s black-and-white images made me think, shamefully, of an iPhone cover, and then some kind of runic tablet. In fact, it was a 20,000-year-old slab of Antarctic ice, speckled with bubbles that scientists study to understand changes in air composition over time. She describes these research samples as “tools of wonder and enlightenment,” and her images convey reverence and possibility.

“DOES THE ONE-DROP RULE STILL APPLY” and similar questions take on koan-like force when Kevin Claiborne layers them in black-and-white photographs of desert landscapes, all rock heaps and Joshua trees. There are many allusions here: to anti-Blackness as hostile terrain; to Black creation under extreme conditions; and to the convergence of critical thinking about race and ecology, a growing area of inquiry in art and practice.

On 10 military bases across the United States, Debi Cornwall photographed the stage-set mock villages where soldiers train for deployment overseas, staffed in part by immigrants from Iraq and Afghanistan. A former civil rights lawyer, Ms. Cornwall is an expert in this strain of American dystopia — her previous photo book, “Welcome to Camp America,” was set at the Guantánamo Bay base — and in how to convey it through eerie, washed color.

Old Colony is a soda brand in Puerto Rico; Pablo Delano borrows the name for his collection of archival images of the island from the colonizer’s point of view, complete with condescending original captions. The installation works its way, slyly, to an image of Puerto Rico’s governor, Wanda Vázquez Garced, and other politicians holding a sign with the United States flag and the inscription, ¿Donde estaríamos sin ella? — “Where would we be without her?”

For six years, Erin Lefevre has photographed her younger brother Liam, who is 20 and autistic. The process is collaborative, and the handwritten captions for each image are by Liam. Ms. Lefevre is also a special-education teacher in New York City schools, and her project is educational as well, sharing research information and statistics about autism (1 in 54 American children will be diagnosed, according to the C.D.C.).

How to find respite amid trauma is a salient issue this year, especially for Black and brown communities — and not least in Minnesota, where Nina Robinson lives and created this series of portraits of activists, artists and healers after the death of George Floyd. She shares interviews in which they describe their approaches to self-care but her photographs already do the work; whether shot in verdant gardens or on the street, the portraits feel grounded, restful.

Raised in the Bronx, the 21-year-old photographer Sofie Vasquez has been documenting the borough’s underground wrestling scene since she first encountered it two years ago. It’s a subculture in which fighters with names like Brother Greatness, Karen Bam Bam or Big Game Leroy square up in elaborate matches in neighborhood gyms. Her solemn, nocturnal black-and-white images honor the intimate rituals of fandom and the fights themselves, in all their bombastic drama.

Photoville is a free outdoor exhibition through Nov. 29 in the five boroughs. Information: photoville.com.