Peter van Agtmael is not easily categorized as either a photojournalist or a documentarian. His images are often complicated and at times oblique, and they hew to no particular genre or aesthetic approach in photography.

A member of Magnum Photos, Mr. van Agtmael, 37, is best known for his powerful coverage of the wars in Iraq and Afghanistan as well as his continuing examination of America, but he says he does not want to be constrained “by one-250th of a second or the rectangular frame.”

“I am partly in the photojournalism realm, but it’s never been the be-all and end-all,” he said in a recent interview. “It’s always been about the broad spectrum of photography and how can I learn from it to better communicate with more complexity, rigor and beauty.”

Such issues were on his mind as he prepared for the Miami Street Photography Festival this weekend, where he is a featured artist. The festival coincides with Art Basel Miami Beach. 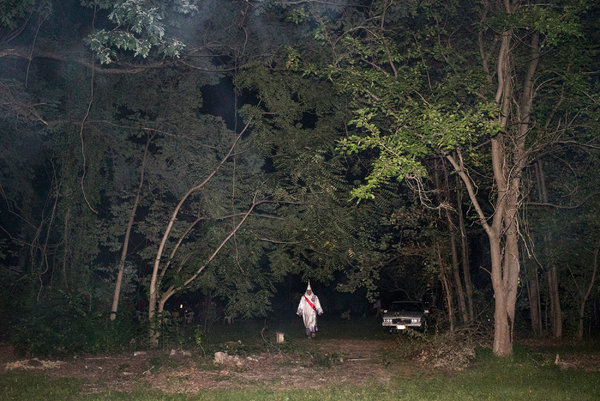 Mr. van Agtmael, who lives in Brooklyn, said he did not see himself as a street photographer, but he also rejected any labels that break down his work. “Photography is photography,” he said. But he does deeply respect the intense discipline and hard work needed to make a successful street photograph, he said, an endeavor that ends up in failure perhaps 99 percent of the time.

Having grown up in a well-to-do suburb of Washington, he studied history at Yale before finding photography in a class there taught by Catherine Opie. He considers himself “fact oriented” and analytical, but he said the only way to describe his discovery of photography was as a “mystical experience.”

After making arrangements to be embedded with United States forces, he went to Iraq in January 2006 and worked there regularly through 2009, immersing himself in the wars, photographing often on assignment for The New York Times Magazine.

He was spurred on by a lifelong interest in such conflicts, an impulse that stemmed in part from his grandfather’s nostalgic stories about serving in World War II in Europe, which intrigued him from an early age. But like many male conflict photographers, he was also motivated by something primal, he said.

“There’s this pressure that war can be a shortcut to becoming a man that was appealing,” he explained. “I understood war was screwed up, but I also liked the idea of being respected for bravery,” he said, adding, “along with other dark and immature reasons.”

In Iraq, he found himself photographing American soldiers kicking down doors, shooting and being shot at. In his early stints, he said, he looked at the war mainly from the perspective of an American on the front lines. But he soon realized that the war was more about America in the Middle East and the people who lived there. Those people, he said, were the ones affected by it, the ones “who we generally refuse to see as three-dimensional human beings.”

As the wars continued, he said, he grew more interested in knowing what it was about America that made it “keep on fighting these reckless wars in reckless ways.”

In truth, he knew little about his own country.

“I started discovering America while on embeds in Iraq and Afghanistan because I was suddenly seeing a cross culture of race and class in American society that I hadn’t been exposed to growing up,” he said.

After three years of covering war, Mr. van Agtmael said, he felt burned out and set out to look at his own country through several long road trips and visits to places like Louisville, Detroit and New Orleans. His wanted to discover more about America in the shadows of the wars, focusing on class, race, identity, family and history. But it was also a journey of healing and of rediscovering photography for him.

“Photography was so tainted by violence in Iraq and Afghanistan that a big part of these trips was about falling in love with photography again and wiping it clean from what had become so dark and disturbing,” he said. “Even though some of the themes were bleak, I was using photography to reflect on the beauty of the world.”

The resulting images are collected in the 2017 book “Buzzing at the Sill.” In Miami, Mr. van Agtmael will discuss these photos as well as those from his 2014 volume, “Disco Night Sept. 11.” He will also talk about how personal narrative can connect to a broader political narrative.

In addition, he will look at the role photography has played in his own life and how he has developed his own way of seeing, unburdened by the confines of photographic genres. His visual journey has been influenced by a relentless study of images by a broad range of photographers. Of late he has been studying Dawoud Bey’s “Seeing Deeply” as well as Deana Lawson’s and Masahisa Fukase’s self-titled works.

Mr. van Agtmael’s photographs have a visual rawness that displays a lack of concern for traditional photojournalistic aesthetics. This was not entirely a conscious decision on his part. The visual language was, he said, more dictated by his experiences than the desire to make specific aesthetics statements.

“It was about not trying to replicate the visual approaches I was seeing because those served the purposes of telling other people’s stories,” he said. “The whole process was, ‘What do I want to say?’”