The Museum of Modern Art, which opens on Oct. 21, is not what it used to be — and not yet what it may become.

While still very much in progress, the museum could be on its way to its second round of greatness, to judge by the new presentation of the core collection and, even more, a series of inaugural satellite shows drawn from the permanent collection along with five new commissions. Together they underscore the vastness of the museum’s holdings, a sight that is staggering, possibly unprecedented and probably won’t recur until its next expansion.

It now has a new building with a new wing added almost seamlessly to its 2004 Taniguchi expansion. This is the largest home it’s ever had — a place, like the Metropolitan Museum of Art, where you can get lost. A psychological benefit is that the large (despised) Taniguchi atrium is de-emphasized. It doesn’t seem so big when you can get farther away from it.

The new MoMA is also more physically welcoming, and in many ways more workable, than it’s ever been, whether one is looking at art, resting or refueling. It has a bigger lobby, another entrance and a pair of elevators; an inventive top-to-bottom public stairwell; more seating throughout and an expanded cafe — though it’s stuck up on the sixth floor. It remains to be seen if this expansion will suffer the overcrowding that plagued the last, but here’s hoping.

Equally important are the museum’s reset priorities, which focus on its unrivaled permanent collection rather than temporary exhibitions and on giving that collection the lion’s share of 24 added galleries. What they contain has been rethought by a team of curators — from department chiefs down to assistant curators — intent on telling a different, more inclusive, less-definitive story that will not only encompass artists from around the world and integrate media but also play down the traditional dominance of painting and sculpture. 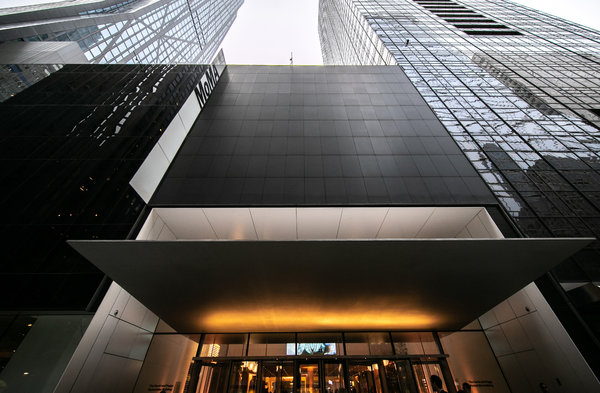 The plan is to keep the collection as much in flux as the temporary shows. Every six months a third of the permanent collection galleries will be reinstalled. But the first iteration — with new acquisitions, unfamiliar works long buried in storage, and startling pairings and concentrations — is bound to generate surprises, some disappointments and plenty of arguments. The Euro-American narrative is still too prominent and the museum is still too enamored of Conceptual and video art.

There’s not a lot of breezing through the permanent collection, inhaling the unquestioned greatness of the anointed. Each gallery has its own character, distinct from its neighbors; its own jolts and disruptions. Most galleries display works in several mediums and from different times. Some do this more successfully than others; for me, those on the fifth floor are generally better than those on the fourth. And the new dumbed-down gallery headings and word salads of the main wall texts definitely need work. All references to the “isms” — the modern art movements — have been banished except for Surrealism, the most popular of them. The decision seems to be to protect visitors from what they do not know.

The rise in the number of artists who are non-male, nonwhite and non-Western is thrilling and attests to the curators’ hard work. The curators have scoured the collection and made strategic new acquisitions. On the fifth floor, where the story of Modernism begins, these include Paula Modersohn-Becker’s “Self Portrait with Two Flowers in Her Raised Left Hand,” a 1907 work by a pioneering member of the German avant-garde (showing the artist pregnant) that entered MoMA’s collection in 2017, acquired in joint ownership with the Neue Galerie in New York. Extended loans fill other gaps. The gallery labeled “Abstraction and Utopia” features a radical little sculpture from 1929 that integrates interior and exterior space. It’s by the Polish Constructivist Katarzyna Kobro and is visiting for five years from the Muzeum Sztuki in Lodz. Also here for five years is a radiant 1915 painting by Hilma af Klint, a newly-hailed inventor of European abstraction, from the Swedish foundation that holds all her art.

Works of this quality await you in every gallery of the rethought permanent collection. The rethinking is not done. The collection will be considered and reconsidered in the months and years ahead. But give the curators a gold-plated A+ for effort — they have set a new path for their successors — and wait for the next installment. This is only the beginning of a new beginning.

The largest display outside the permanent collection galleries is “Sur moderno,” which celebrates the transformative gift of Latin American modernism from Patricia Phelps de Cisneros, a longtime patron of the museum. Representing artists from Brazil, Argentina, Uruguay and Venezuela, the show includes nearly 90 of the more than 200 artworks in the gift and vitrines displaying archival material like publications, printed matter and photographs of design and architectural projects. There are also films. The show has been organized by Inés Katzenstein, curator of Latin American art and director of the Patricia Phelps de Cisneros Research Institute for the Study of Art from Latin American, the Museum of Modern Art, along with the consulting curator María Amalia García.

“Sur moderno” is at once déjà vu and forward-looking. Its often pure abstraction has the single focus of parts of the old MoMA but filtered through an entirely different sensibility, one whose restraint and rationalism often reflects the influence of European geometric art. It is exciting to imagine these Cisneros works integrated into MoMA’s collection, undercutting the assertiveness and scale of so much postwar American art, from Jackson Pollock to Richard Serra.

As seen here, the Cisneros gift has a breathtaking sweep. It ranges from a strikingly rough back-to-basics painting from 1964 by Brazil’s Mira Schendel to the elegant painted panels of Venezuela’s Alejandro Otero, from 1955, whose patterns and high gloss fuse Op and Minimal art years before these movements took root. There are rare painted works by Hélio Oiticica, Lygia Clark, Lygia Pape and Willys de Castro. The show culminates in a display of six (!) ephemeral hanging wire pieces by the great GEGO (Gertrud Goldschmidt), which are barely visible, yet once seen, fill the eye.

Amy Sillman: ‘The Shape of Shape’

The Modern’s “Artist’s Choice” series rarely disappoints and this iteration is one of its best — and among the most valuable of the inaugural shows. Assembled by the New York painter Amy Sillman, working with Michelle Kuo, a curator of painting and sculpture, “The Shape of Shape” points to one of the museum’s bigger curatorial blind spots, especially as it approaches the present: the fear of painting, color and form that has allowed Conceptual Art and its derivatives such prominence.

Ms. Sillman ranges throughout the collection, across media, generations and styles, seeking out overlooked or excluded artists and unfamiliar works. Her effort parallels the approaches at work in the permanent collection galleries, but reflects a relatively robust visual appetite — the artist’s unfettered eye — that the museum needs more of.

The show’s dense installation encourages surprising connections, like that between the horizontal black shapes that dominate Romare Bearden’s “Patchwork Quilt,” from 1970, and William Baziotes’s “Pompeii,” from 1955, each with its own ratio of abstraction and figuration. One of the best moments is the three-way exchange among Fernand Léger’s brilliant Purist painting, “The Mirror” of 1925; a bright, hinged sculpture, newly acquired, by the Romanian-born Cuban artist Sandu Darie (1908-1991) and a small dark yet colorful painting from 1962 (acquired in 1963) by the Zimbabwean artist Thomas Mukarobgwa. It resembles an Édouard Vuillard interior until you look more closely and read the title: “Dying People in the Bush.”

The Modern’s curators excel at choosing large-scale, often environmental installation pieces that are at once immersive, challenging and accessible, as evidenced by “Surrounds,” an exhibition across the sixth floor, and by two high points in the permanent collection galleries. (See Joan Jonas’s elaborate “Mirage” on the fourth floor, and one of its descendants, Wu Tsang’s remarkable video, “We hold where study” (2017).

That talent is also intermittently evident in “Surrounds” whose 11 installation pieces, acquired over the past 15 years, are being shown for the first time. The presentation has been organized by eight curators from four departments. Look now, because who knows when you’ll see them again.

On the quiet side, there’s Rivane Neuenschwander’s understated “Work of Days,” a room with floors and walls lined with what looks like pale handmade paper, exquisitely textured with galaxies of tiny marks. In fact, they’re bits of dust and fine-grained detritus embedded in adhesive vinyl tile that can be walked on, to quietly magical effect. Much noisier and more ominous is “The Killing Machine” by Janet Cardiff and George Bures Miller, which can evoke a hybrid of “Marathon Man” and “Alien.” If that sounds scary, avoid.

“Apex,” Arthur Jafa’s relentless animated slide show (2013) is about life and death on earth, and the beauty and culture of African Americans. Hito Steyerl’s installation “Liquidity, Inc.” (2014) is a characteristically entertaining, informative and ominous mash-up of language, graphics, television formats that swirl around themes of water, terrorism and climate change. In “Fault Lines,” Jennifer Allora and Guillermo Calzadilla’s dry rocky landscape, two young singers perform every hour on the hour. From certain angles, “Surrounds” resembles a generic international biennial, but all works improve when given time and attention.

The Modern’s reopening has occasioned special commissions from five artists, and one commission-like acquisition. That’s Haim Steinbach’s “hello again,” an all-purpose if ambivalent greeting of return writ large in serif font on a prominent wall in the lobby. It’s an apt welcome back for the museum’s sixth expansion.

The commissions have been overseen by Yasmil Raymond, associate curator in painting and sculpture at MoMA, and two are especially impressive. Kerstin Brätsch’s “Fossil Psychics for Christa” punctuates the walls of the new sixth-floor Terrace Café with shiny bright glass-like pieces that resemble big brush strokes, masks and crazed intarsia. They play well with the Modern’s new signature Grand Antique marble. When its two-year run in the cafe concludes, some of Ms. Brätsch’s parts might migrate to the second-floor collection galleries.

The other standout commission is Goshka Macuga’s extravagantly complex “Exhibition M,” a work of craft and Conceptual Art photo-based appropriation well worth seeking out (and should be more accessible than it is). It takes the form of an enormous tapestry hanging in the lobby of the Lewis B. and Dorothy Cullman Education and Research Building, which faces West 54th Street.

The work casts the artist as André Malraux in a well-known 1954 photograph that shows the French novelist and art theorist surrounded by double-image spreads from his trilogy “The Imaginary Museum of World Sculpture.” Ms. Macuga offers a similar array of images, but each depicts an artwork in the museum’s collection or one of its exhibitions.

Like the new MoMA as a whole, Ms. Macuga’s combinations shake things up. In her case, we get a disjointed narrative of visual puns, sly criticisms and uncanny juxtapositions, most with a distinct feminist slant. It’s a perfect summation of this great institution’s new outlook.