Mr. Paradox, who never left, is back.

Although, technically, “Andy Warhol — From A to B and Back Again” at the Whitney Museum of American Art is the artist’s first full American retrospective in 31 years, over that span he’s been so much with us — in museums, in galleries, on auction blocks, on Calvin Klein poplin shirts — as to make a survey seem almost redundant. At the same time, his ever-presence has made him, like wallpaper, like atmosphere, only half-noticed. He’s there, but do we care?

We can’t not. He’s the most important American artist of the second half of the 20th century. The Whitney show vividly restores him to full, commanding view, and reasserts his importance for a new generation, but does so in a carefully shaped and edited way.

Despite the show’s monumentalizing size — some 350 works spread throughout the museum and an off-site display of the enormous multi-panel painting called “Shadows” — it’s a human-scale Warhol we see. Largely absent is the artist-entrepreneur who is taken as a prophet (malign or otherwise) of our market-addled present: the creator and promoter of Business Art, a venture in corporate Conceptualism that, in the 1980s, brought Warhol into the orbit of Donald Trump, who delighted in quoting the B.A. credo: “Making money is art and working is art and good business is the best art.”

What we have instead in the Whitney show — organized by Donna De Salvo, the museum’s deputy director for international initiatives and senior curator, assisted by Christie Mitchell and Mark Loiacono — is a figure we seem to have lost track of, and one who young artists today can identify with and treasure: the Warhol for whom art, whatever else it was, was an expression of personal hopes and fears. 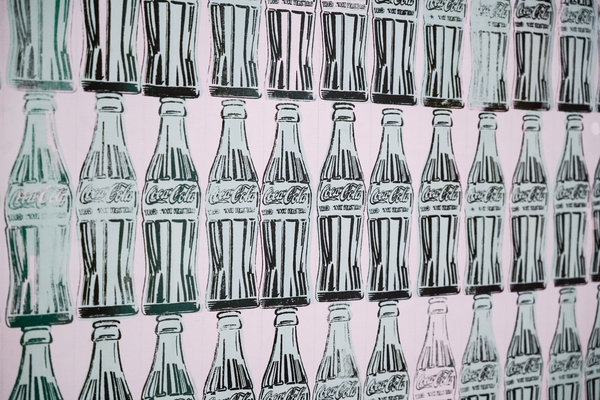 This is not to say that this new-old version of the artist is so different that we don’t recognize him when we arrive on the Whitney’s fifth floor show. Ms. De Salvo has made sure that we do. Right at the start we find a lineup of his Pop classics: Brillo Box sculptures, paintings of Campbell Soup cans, Coca-Cola bottles, camouflage patterns, and a whole gallery filled with silk-screened flowers and electric pink cows. It’s as if the curator wanted to ground us in the familiar, in order to move us on.

Moving on, in this case, means going backward in time, to when the artist was young, and still living at home in Pittsburgh, and still named Andrew Warhola. It could not have been easy to grow up, as he did, a sickly femme kid with bad skin and big ambitions in a Pennsylvania industrial town during the Depression. Almost inevitably, because he was gay and the child of immigrant parents, he stood at once outside and inside mainstream American culture. (He said that his mother, Julia Warhola, spoke English with such a heavy Slovak accent that he had trouble understanding her.)

His aesthetic sense developed from this dual culture positioning too. On the one hand, he was entranced by American pop culture: newspapers, advertising, product design, Hollywood fanzines. At the same time, he was deeply influenced by the religious art he saw — gold-painted icons of saints, Crucifixions, Last Judgments — in the Byzantine Catholic church he devoutly attended, and by the ornamental embroideries and drawings made by his mother at home.

Although there’s only one piece by Julia Warhola in the show — a charming ink drawing of a cat lying on a bed of handwritten “purrs”— her filigreed linear style turns up in the early graphic work produced after Warhol moved to New York City in 1949 to start a career in commercial design. There, after doing freelance illustrations for magazines and record albums covers — there are examples in the show — he landed a choice steady gig drawing newspaper ads for I. Miller shoes.

Julia was part of all this. By the early 1950s she was living with Warhol as muse and collaborator. Because he loved her calligraphic script, he had her sign his commercial work. But not all his output was produced for advertising. Some shoe drawings, encrusted with gold leaf and foil, were stand-alone pieces and intended as portraits of celebrities Warhol admired: Elvis Presley, Truman Capote, the transgender pioneer Christine Jorgenson. And he was drawing, often in ballpoint pen, soft-core homoerotic images and sketches of cross-dressed male friends.

These pictures, well represented here, have only fairly recently been admitted into the standard record of his career. And they’re important additions. They make his identity as a gay man, which he was on-and-off cautious about broadcasting, a concrete part of his story. And knowledge of it opens a path to consider how and to what degree his art queered — to use a term from academic theory — received versions of American culture: questioned their validity, revealed their contradictions, turned them inside out.

One obvious example of this testing of orthodoxies was the way he changed careers. In the late 1950s and early ’60s, he dropped his professional identity as a graphic designer and picked up one as a gallery artist. In an era when painterly self-expression was considered the only serious style, he adopted a commercial reproductive technology, silk-screen printing, as his art medium. At a time when talk of money and markets was thought to sully art, he made work about commerce and consumption. The soup can and Coke bottles date from these years.

In 1962, he drew on the visual language of the church art of his youth to transform a photographic portrait of Marilyn Monroe, who had taken her own life that year, into a gilded icon of a martyr-saint. And he turned his insider-outsider eye on the country at large and found it saturated in violence, the reality of which he yanked from the popular press and pushed into art with images of car crashes and suicides, and scenes of vicious police attacks on black civil rights protesters. With this body of work he became, in one stroke, our great new history painter, the one we didn’t even know we’d been waiting for.

Each of these extraordinary paintings was conceived as part of a series of closely related works which differed in color and format. Warhol was an artist-designer of tremendous virtuosity, and the temptation to demonstrate this by putting comparative works side by side must be hard to resist. But Ms. De Salvo has chosen to display just one example from each series, and that’s a good idea. A single, small, tondo-shaped gold Marilyn, isolated on a galley wall, tells you everything you need to know, emotionally, devotionally, about that picture and what it meant to that artist.

In 1965, Warhol “retired” from painting and spent the next decade multitasking like mad. He organized collaborative multimedia events like the Exploding Plastic Inevitable, a sensory overload of dance and superstarness delivered by the Velvet Underground and Nico. He published a magazine (Interview), and turned out hundreds of films. (Several short ones play in the galleries, and the museum has organized a program of individual screenings for the run of the show.) This was also when he put the Business Art concept into effect, which primarily meant lining up endless lucrative portrait commissions from the global rich and famous of the day. (Dozens of such products line the walls of the Whitney’s lobby gallery.)

Was Warhol the outsider striving to get inside at last? And what kind of inside was this that had him courting Imelda Marcos, painting the Shah of Iran, and trying to swing a portrait deal with Mr. Trump? A serious chunk of the art world wasn’t amused. It started to call him washed-up.

He wasn’t washed up, though. Good work still came, including, in 1975, the sparkling, self-commissioned portrait series called “Ladies and Gentlemen,” its sitters all black and Latino cross-dressers recruited from Manhattan drag bars. But in the decade leading up to his sudden death in 1987, at 58, Warhol’s art gradually changed in tone, grew darker, fatalistic. Long underrated, even critically disparaged, this work still awaits careful study, and Ms. De Salvo devotes fully a third of this brilliantly-conceived show to it

With the advent of AIDS, and the loss of partners and friends to it in the early 1980s, Warhol swung between self-protective denial and outright fear, which intensified his religious faith. The show captures his mood of free-floating anxiety in an extraordinary salon-style installation of two dozen small 1980s silk-screen paintings, most in black and white, several quoting from tabloids ads and Apocalypse-minded religious fliers (“Stress!,” “Are You ‘Different?’,” “Mark of the Beast,” a “Heaven and Hell Are Just One Breath Away!”) interspersed with paintings of dollar signs and dire news headlines (“Marine Death Toll Hits 172”).

Intimations of mortality had always coursed through Warhol’s art and the 1970s brought new ones in eerie pictures of skulls, and, by implication, in “Shadows,” a 100-plus panel abstract tour de force in which darkness has no source and no end: It’s just there, foreboding, miasmic, waiting. The artist specified that this wraparound painting, on loan from the Dia Foundation in Beacon, N.Y., could be edited to fit differently sized spaces. In the version now on view at Calvin Klein headquarters at 205 West 39th Street, it’s reduced to 48 panels and has its sightlines interrupted by the space’s thick columns. Even with handicaps, though, it’s a stunner.

And, strange as it seems for an artist so absorbed in worldly matters, images of spiritual transcendence were a staple of his work too, from the “Marilyn” paintings onward. And Ms. De Salvo has given his retrospective a celestial conclusion. There are only four works in the large rectangular final gallery. At either end hang two giant examples of his abstract “Rorschach” paintings, one gold, one black. With their curves and flanges they could be giant examples of Julia’s rococo designs. On a long wall hangs a 25-foot long silk-screen painting of Leonardo da Vinci’s “Last Supper,” its sacred narrative of dread and redemption half-buried in camouflage patterning. And facing it is an even longer picture called “Sixty-Three White Mona Lisas,” in which repeat images of the most famous celebrity-sitter of all are dimly visible under washes of semi-translucent white paint.

The work is both a nod to an old, fixed art history (Leonardo, Duchamp) and the statement of a new, open-ended one of simultaneous erasure and proliferation. And seen at the conclusion of Ms. De Salvo’s show the painting suggests a further reading: the image of a host of spirits — benign? threatening? neutral? — stirring behind a drifting bank of clouds.

I never thought I’d use the word exalted for Warhol, or transcendent, or sublime. And he probably never thought to use them either. But that’s what’s here.

Andy Warhol — From A to B and Back Again 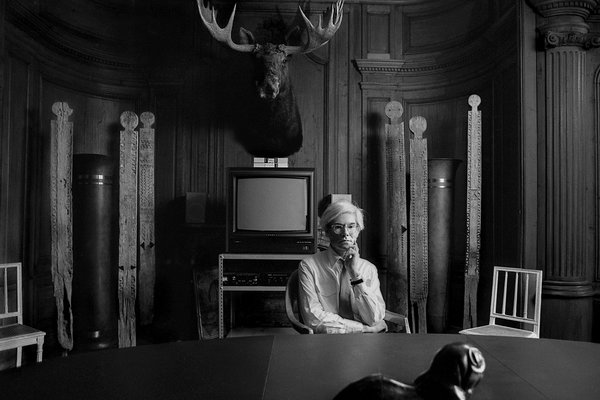 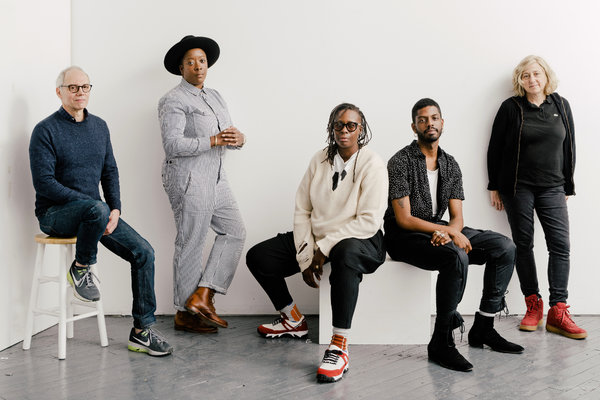 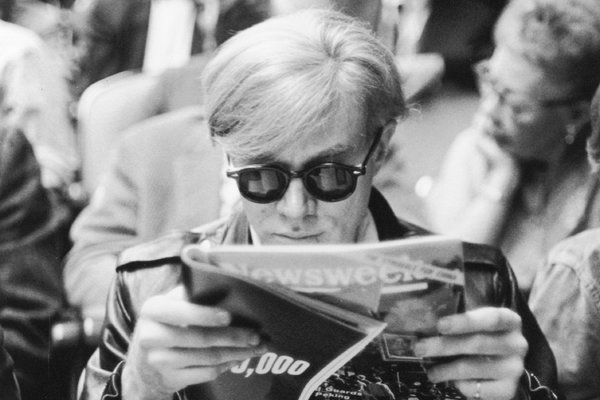 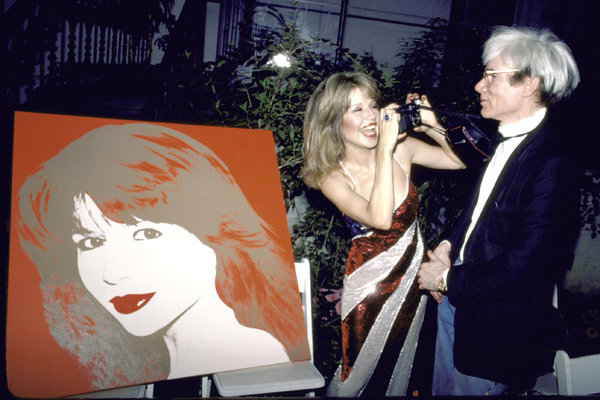 Holland Cotter is the co-chief art critic. He writes on a wide range of art, old and new, and he has made extended trips to Africa and China. He was awarded the Pulitzer Prize for Criticism in 2009.