“Naturally, in times like these, our nation looks to its president for comfort and guidance,” Stephen Colbert told his audience on “The Late Show” last Monday night. “That’s our first mistake.”

The next night, Trevor Noah, host of “The Daily Show,” said President Trump was trying to scare people by saying a caravan of Central Americans walking toward the border was full of criminals. “It’s sort of like Halloween,” Mr. Noah said, “but a racist Halloween.”

On Wednesday, a distinctly bronzed and bewigged Jimmy Fallon delivered a bit on the president’s midterm message to each state: “Hawaii is a beautiful, beautiful country,” and “There’s a New Mexico? Isn’t the old one bad enough?”

And on Thursday, James Corden told his audience on “The Late Late Show” that “a Halloween display at a North Dakota home was so terrifying, that concerned neighbors actually called the police,” before revealing picture of a Trump 2020 lawn sign.

The outcome of Tuesday’s elections will answer a number of questions: How devoted is the president’s base? How strong is the Democratic resistance?

And what, if anything, have nearly two years of late-night Trump zingers added up to?

Since the 2016 election, even the least ideological hosts have found the president an irresistible target night after night. While the shows’ primary aim is to entertain, the first major election in the late-night vs. Trump era will also be something of a barometer for how influential these shows can be, beyond goosing album downloads and box-office sales.

[Read our roundups of the highlights of late-night TV.]

Comedy Central’s “The Daily Show,” which has long had a political focus, broadcast all last week from Miami to raise awareness of Florida’s tight races. Mr. Noah sat down at a restaurant for an extended interview with Andrew Gillum, the Democratic candidate for governor, just one of several competitive contests Mr. Noah discussed during the week. “The audience was cheering when we were mentioning ballot initiatives,” said Jen Flanz, the show’s executive producer.

On “The Late Show” on CBS, Mr. Colbert will capitalize on the excitement and tension by broadcasting live on Tuesday (typically shows are taped earlier in the evening) so he can react in real time as results roll in.

This level of late-night political content would have been unthinkable when Jay Leno and David Letterman dominated the hour, let alone during the reign of Johnny Carson. Bill Carter, a former TV correspondent for The New York Times and the author of two books on late night, said that Carson was careful never to reveal his real point of view.

“He thought it was important to keep a broad audience, so he aimed for the middle of the country,” Mr. Carter said, adding that even Jon Stewart, the longtime host of “The Daily Show,” didn’t seem to want to be too identified with either party. But now, he said, “comedians have dropped the veil.”

And what’s behind that veil is solidly left of center. “People have asked why there isn’t a conservative form of late night comedy,” Mr. Carter said. “I think Fox tried it briefly, but there aren’t enough writers to support it.”

Mr. Fallon is perhaps the closest to the old mold. He has always positioned himself as a broadly appealing figure, quicker to engage guests in a round of charades or karaoke than to hurl down any political gauntlet. (Commentators on the left ridiculed him during the 2016 campaign for seeming to go easy on Trump in an interview that involved him ruffling the candidate’s hair.) But even he has perfected a Trump impersonation, and — while he’s still more likely to paint Trump as juvenile, rather than as the existential threat that other hosts tend to see him as — he lampoons the president on a nightly basis.

On Thursday, with the midterms just five days away, Fallon mimicked the president’s thinking: “So many people to offend, so little time,” he said. 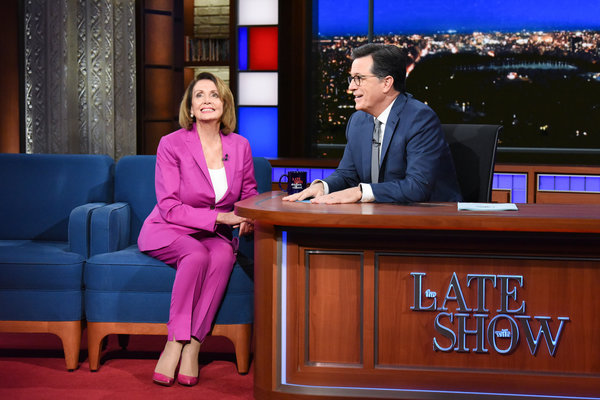 Perhaps more revealing has been the trajectory of Jimmy Kimmel. In the past two years, he has traded in his old comic persona — a chatty insult comic from Nevada, with a no-nonsense sensibility and a broad appeal to Middle America — for a new identity as a liberal lion.

When the G.O.P. was attempting to repeal the Affordable Care Act last year, Mr. Kimmel delivered a series of emotional monologues about his son, Billy, who was born with a severe heart condition. Mr. Kimmel’s voice has been boisterous throughout the midterm season and last week, he appeared at a rally in Nevada for Jacky Rosen, the Democratic candidate for Senate.

But what impact is any of this going to have?

In rare instances, celebrities have a measurable effect on a race, especially when they are otherwise seen as apolitical. Last month on Instagram, Taylor Swift endorsed Phil Bredesen, the Democratic Senate candidate in Tennessee, and pointed her followers to the website Vote.org to register. In the next five days, 281,261 people under the age of 30 registered to vote on that website, nearly double the number that signed up in the entire month of October 2016.

Craig Garthwaite, an associate professor of strategy at Northwestern University’s Kellogg School of Management, wrote a paper on the so-called Oprah Effect when Oprah Winfrey endorsed Barack Obama in the 2008 Democratic primary. He found that Ms. Winfrey — who campaigned last week in Georgia for Stacey Abrams, the Democrat running for governor — may have tipped an additional one million votes into Mr. Obama’s column.

But hammering away on late night, he said, feels different.

James Fowler, a professor at the University of California, San Diego who studies political participation, disagrees.

“You can imagine that with any one of these late shows, with multiple messages and doing it night after night after night, it would be hard to make an argument that it’s not having at least some effect on an increase in voter turnout,” Mr. Fowler said.

And the shows’ effects could go beyond turnout. Mr. Fowler once published a study that found that Democratic politicians who appeared on Mr. Colbert’s previous show, “The Colbert Report,” raised about 40 percent more money in the following two months than they had in the two previous months.

Even the most political shows have audiences that are less politically engaged than you might think. Alison Camillo, the executive producer of “Full Frontal With Samantha Bee,” described the show as “like a 10” on the political scale.

But according to data from Nielsen, Ms. Camillo said, only about half of the show’s audience was registered to vote. The show launched a news trivia app in September called “This Is Not a Game: The Game,” which includes cash prizes and election reminders (and jokes), in an effort to get its viewers to the polls.

“We don’t care if you’re a Democrat, Republican, socialist, capitalist, or person at the bar who says you hate all the parties because you’re trying to hook up,” Ms. Bee says in the app’s introductory message. “We just want to get you excited about voting!”

The show, however, is decidedly less neutral, with a perspective planted firmly on the left. (Ms. Bee apologized this summer for using a vulgarity on air in referring to Ivanka Trump.) And though it is, at its core, a comedy show playing for laughs, Ms. Camillo said there is another goal, as well.

“I want people to feel better after they watch our show, or feel like somebody understands them in some way,” she said. “There’s a lot of frustration, a lot of anger, a lot of emotions that weren’t here even just a couple of years ago. That’s going to bleed through into the show every week.”