Welcome to Best of Late Night, a rundown of the previous night’s highlights that lets you sleep — and lets us get paid to watch comedy. We’re all stuck at home at the moment, so here are the 50 best movies on Netflix right now.

With ballots still being counted in key states on Wednesday, late-night hosts shared America’s stress as they waited to hear who’d won the presidential election. “Seriously, today felt like waking up with a hangover and realizing you’re still at the bar,” Jimmy Fallon said on “The Tonight Show.”

Jimmy Kimmel echoed Fallon’s exhaustion, saying the past day had been a “pollercoaster of emotions and nausea."

“I thought if your election lasted more than 48 hours you were supposed to seek medical attention,” he said in his monologue.

“Joe Biden definitely did better than Hillary Clinton. He was able to pick up the sexist vote but he didn’t do as well among racists, so… .” — JIMMY KIMMEL

“Very early this morning, Biden spoke to a drive-in crowd in Wilmington, Del., and he told us that we need patience. But I’m not sure it’s one of America’s strengths. I mean, if a TikTok isn’t fun in the first three seconds we’re like, ‘Eh, next.’” — JIMMY FALLON

“We just have to be patient in a country that literally invented the Domino’s tracker so we know exactly when our pizza will arrive.” — JIMMY FALLON

“One good thing about the pandemic: We’re now used to waiting a few days for results.” — JIMMY KIMMEL

“After all that good news for Biden, in a move that just reeks of desperation and cheap cologne, with eight million votes still uncounted, Trump’s campaign manager came out of the blue to announce, ‘We are declaring a victory in Pennsylvania.’ Bold! And I fully expect his victory in Pennsylvania to be just as successful as his victory over coronavirus.” — STEPHEN COLBERT

“You can’t claim the votes. This is the Electoral College, it’s not baggage at an airport carousel.” — JIMMY KIMMEL

“I mean, I knew that Trump didn’t like science, but I didn’t realize he had disavowed numbers. I mean, maybe this explains why he’s always in debt.” — TREVOR NOAH

“If they hadn’t canceled the Olympics this year, he would have won that, too. Basically, his message last night in a nutshell was, ‘We won a completely fraudulent election.’” — JIMMY KIMMEL

“Counting votes is not finding votes. They’re not scanning the beach with a metal detector.” — SETH MEYERS

“Trump’s mishandling of the virus may have played a large part in Biden’s win, because recently, Wisconsin has become a Covid-19 hot spot. But with this win, Democrats across the country can breathe a little easier — except for the ones in Wisconsin, because, again, it’s a Covid-19 hot spot.” — STEPHEN COLBERT

“Friends and neighbors, last night wasn’t just about the fate of democracy; it was also about getting high, because voters across the nation, Americans of all stripes, voted yes on the proposition, ‘You guys party?’” — STEPHEN COLBERT

“First, the recreational use of marijuana was legalized by New Jersey voters, so we might finally get an answer to the question, ‘What if Chris Christie got the munchies?’” — STEPHEN COLBERT

“But I am excited for New Jersey to have weed. Imagine how next-level edibles are going to be when Italian-Americans are running dispensaries: [In a New Jersey accent] ‘Yeah, so this is an indica pepperoni calzone. I like it with a side of O.G. Kush marinara sauce.’” — TREVOR NOAH

“Out west, they’re taking it a step further, because Oregon has become the first state to decriminalize hard drugs like cocaine and heroin. This has upset a lot of people, but on the plus side, it will bring millions of jobs in the tiny sandwich bag industry.” — STEPHEN COLBERT

“Oregon did it right! They’re the only state with a backup plan in case Biden loses.” — TREVOR NOAH

“Honestly, though, I think this is a good thing, because way too many people get locked up in America for way too long. Although, let’s be real: Whoever proposed this bill definitely had a little heroin, cocaine and meth on them at the same time, right?” — TREVOR NOAH

“In Washington, D.C., voters passed a measure to decriminalize the use of magic mushrooms. Now that is — wait a second: Are we sure D.C. didn’t decriminalize mushrooms four years ago, and this has all been a bad trip?” — STEPHEN COLBERT

What We’re Excited About on Thursday Night

The French avant-pop artist Christine and the Queens will perform on Thursday’s “Late Late Show.” 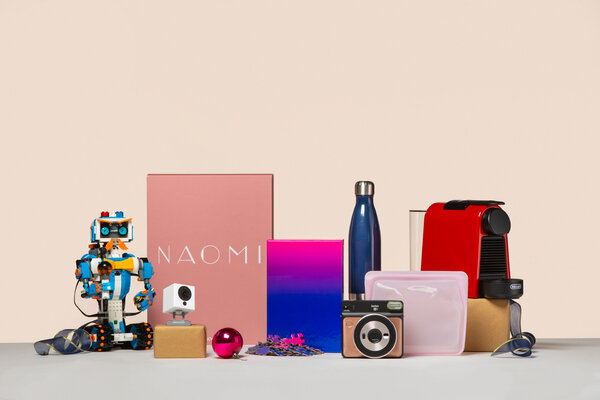 This year more than ever, holiday gift guides can be a wonderful distraction from daily stress.