There have been plenty of indications that the Metropolitan Opera is under new musical management. But the debate over the projectile champagne glass was as good a sign as any.

It unfolded during a recent rehearsal for a much-anticipated new production of Verdi’s “La Traviata.” When it opens on Dec. 4, this “Traviata” will be the first opera Yannick Nézet-Séguin has conducted as the Met’s new music director.

The soprano Diana Damrau, playing the heroine, Violetta, had just hurled her champagne glass across the rehearsal room as she sang the defiantly joyful aria “Sempre libera.” The glass landed, midphrase, with a crash.

Mr. Nézet-Séguin brought the rehearsal to an immediate halt, objecting to the intrusive clatter. “The explosion is in the music,” he said. 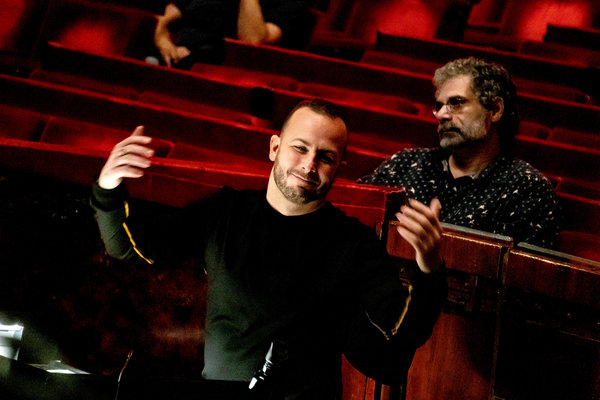 Glass throwing is hardly rare in “Traviata” stagings — the Met’s last production also had its Violetta hurl one against a wall during “Sempre libera” — but Mr. Nézet-Séguin said he was dismayed by how much noise there was on the Met’s stage these days, in ways that could distract from the music.

After a short discussion with the director, Michael Mayer, a compromise was reached. Rather than chucking the glass in the middle of a line, Ms. Damrau would wait until the end of the measure, so that the sound would not fight the music. And Mr. Nézet-Séguin had one more request: that Ms. Damrau throw the glass upstage, preventing stray shards from threatening the players in the pit.

It was a small but telling moment: Mr. Nézet-Séguin was taking musical responsibility for the Met.

“It’s my role,” Mr. Nézet-Séguin, 43, said in an interview later. “I don’t want to say that it’s to defend the music, but it’s to represent the music in all of the structure of the opera.”

The Met, the largest performing arts organization in the nation, has struggled with unsteady musical leadership for more than a decade. Years of health problems kept Mr. Nézet-Séguin’s predecessor, James Levine, away for long stretches, and ultimately forced him to step down as music director. Then accusations of sexual misconduct, which Mr. Levine has denied, led the Met to sever all ties with him earlier this year. The new music director has big shoes to fill, and a big wound to heal.

Mr. Nézet-Séguin, who had originally been set to assume the post in 2020, moved up his start date to take a stronger musical hand at the opera house after the allegations against Mr. Levine came to light. And although it will be a few seasons before he takes on his full workload at the Met and implements some of his plans for commissions and collaborations, he is already making his presence felt. At his first “Traviata” rehearsal with the orchestra, he paused often to fine-tune passages, even though the company has performed the piece more than a thousand times.

He has been helping the singers hone their roles — especially the star tenor Juan Diego Flórez, a bel canto specialist known for his high C’s, who is singing the somewhat lower and less elaborately ornamented role of Alfredo for the first time. Mr. Flórez, whose Alfredo promises nevertheless to be very much in the bel canto tradition, praised Mr. Nézet-Séguin’s understanding of voices. “He wants to bring back the attention to detail that this part has,” he said in an interview.

When Mr. Nézet-Séguin urged Mr. Flórez to sing the drinking song in the first act softly, as the score indicates — to underscore that Alfredo is still insecure and sexually inexperienced — he drove the point home in a characteristically good-humored way.

During rehearsals Mr. Nézet-Séguin worked closely with the creative team to align the staging with the music, tweaking the blocking in one duet to help the singers and making sure the motivations of the characters were rooted in the score.

“He’s a real dramaturg, musically,” Mr. Mayer said shortly before the start of the first stage rehearsal. “He’s very invested in, and interested in, the narrative information that is conveyed through music that is unrelated to the libretto.”

Then there’s the big break Mr. Nézet-Séguin fought for: He persuaded the Met to restore the second intermission in “La Traviata.” The company, conscious that many people now prefer shorter nights at the opera, had been performing the work with only one intermission in recent years. But Mr. Nézet-Séguin pushed to bring back the second interval, so the singers could rest their voices between the second and third acts, and audiences could experience the opera and its pacing more as Verdi conceived it.

There is a lot riding on the new “Traviata.” Peter Gelb, the Met’s general manager, said in an interview that “there’s a sense of history hovering over this whole thing.”

Introducing new Met productions of beloved staples is not for the faint of heart: Conservative members of the audience tend to howl at modernizing ideas, while more adventurous operagoers are just as dismayed by stagings they see as hidebound. (Witness the shock that greeted Luc Bondy’s stark “Tosca” in 2009, followed by the concern some critics expressed last season when a more traditional staging by David McVicar replaced it.)

The Met’s most recent “Traviata,” a provocative, starkly contemporary look at sex, death and gender by Willy Decker, was one of its most successful reimaginings of a classic. It followed not one but two traditional, opulent productions of the opera, both by the director who more than any other has defined opulence at the Met: Franco Zeffirelli.

For this production, the company is going for beauty and tradition, but with a twist. Mr. Gelb turned to Mr. Mayer, a Tony Award-winning Broadway director who previously directed the Met’s Rat Pack “Rigoletto,” updated to 1960s Las Vegas, and Nico Muhly’s midcentury-chic new opera “Marnie” this fall. He has already been engaged to create a new “Aida.”

For “La Traviata,” Mr. Mayer said, he wanted to embrace the opera’s romanticism and explore its traditional setting, mid-19th-century Paris. Like other directors have, he tells the opera as a flashback, staging the prelude as Violetta’s death scene; her deathbed remains on stage throughout.

“She has a surge of life in her, right before she dies,” Mr. Mayer noted of her final moments in the last act. “And I thought: What if we could capture the swirl of this opera in that moment?”

Each act is depicted as Violetta’s memory of it, staged in a distorted version of her luxurious room, full of elegant furniture, with surroundings that change to evoke the different seasons — from the springtime of falling in love, to the summer of the couple’s idyll in the country, to their calamitous fall and final, fatal winter.

The set designer, Christine Jones, said in an interview that she envisioned the opera as Violetta’s moment of “terminal lucidity,” the mixture of clarity and life-flashing-before-your-eyes recollection that can occur just before death. Ms. Jones, who also designed Mr. Mayer’s “Rigoletto,” said that working at the Met was quite different than working on Broadway, where she designed the blockbuster “Harry Potter and the Cursed Child” and where she has a musical featuring a very different kind of diva, “The Cher Show,” opening the night before “La Traviata.”

While Broadway shows have many, many weeks of rehearsals and previews before opening night, a repertory opera company like the Met must do everything on a much tighter schedule. “There’s a sense that you’re working at this high level, with artists of this high caliber, at breakneck speed,” Ms. Jones said. “It’s like the Super Bowl, or basketball playoffs — you just have to be on point, on your game, and super focused.”

No one has been more focused than Mr. Nézet-Séguin, who moved into a new apartment a few blocks from the Met just in time to start rehearsals. He is still moving into his new office backstage: During a recent interview there, his books had not yet arrived, so there were only a few scores on his shelves. The artwork he had chosen — including Chagall sketches for “The Magic Flute,” and a cartoonlike drawing of Mr. Nézet-Séguin presented to him by the orchestra — were still waiting to be hung, and a television monitor that will show a live feed of the stage had not yet been connected. But his small Nespresso machine was already getting a workout.

“Doing ‘Traviata’ as a music director is like going into a big symphony orchestra and doing Beethoven Five,” said Mr. Nézet-Séguin, who is also the music director of the Philadelphia Orchestra. He noted that despite the fact that he had conducted the work at the Met before, he was bound to attract more scrutiny with it now: “You touch, completely, the core.”

He added that he had not expected to begin his tenure with “La Traviata” but was pleased that it had worked out that way: It was the first opera he worked on, in 1998, as an assistant conductor and choir master at the Opéra de Montréal.

“So, 20 years later, this is the first production I do as music director of the Met,” Mr. Nézet-Séguin said. “The stars aligned to make it this.”