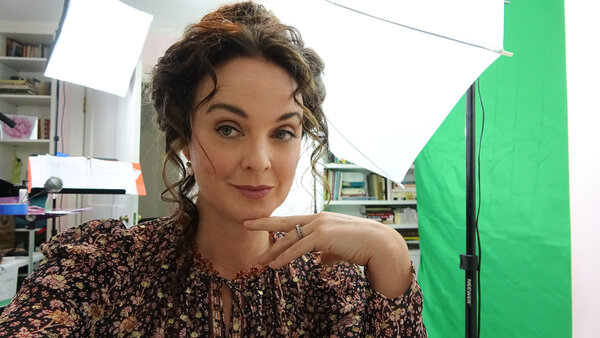 “Are you making a kissy face, Max?” Shereen Ahmed is blushing as she leans into her Zoom window to ask a question of her co-star, Max von Essen.

“Yeah, I think I am going to close my eyes,” he replies. Then he leans into blank space with puckered lips.

She does the same, becoming half of a Norman Rockwell valentine, and the primal act of musical theater, the ingénue kissing the juvenile, has taken place — only with the actors hundreds of miles apart, locked down in their apartments, acting into their iPhones, while the rest of us in the cast watch from our own muted Zoom squares.

We 13 actors had come together for two weeks to create a full-length, fully “produced” remote version of the classic holiday season musical “Meet Me in St. Louis” for the Irish Repertory Theater, which will stream it starting Dec. 11.

I had quickly signed on to portray Mrs. Smith, the mother of the central family, not least because I was intrigued to play my first true maternal part.

Having spent much of my stage career as a kind of terminal ingénue — not that long ago, when I played opposite Max von Essen, I was the kisser — I felt ready to play the mom of a pack of daughters. That’s actually what I am in life, and I was grateful that this mom had a seamy back story: Mary Astor, who originated this wholesome role in the 1944 film, had used the part to restore her image after a highly publicized sex scandal. 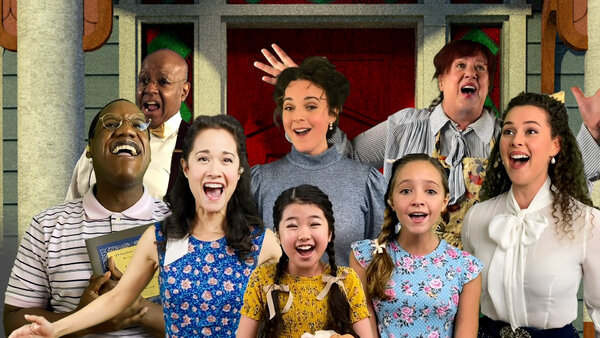 With a wink to Astor, I set out to make my Mrs. Smith a matured Gibson Girl, of whom there were surely many in 1904 St. Louis, complete with high bun and corset, capable of giving credible advice on love matters to hormonal adolescents.

Remote performing began in early-pandemic March as a sort of lifeboat for my profession, as Zoom and related technologies, never meant to simulate the stage, were adapted for theater and cabaret. Singers who six months ago started soundcheck with “Is this thing on?” were suddenly tech experts.

The Sondheim 90th birthday tribute in late April was for many of us the first occasion to really explore remote technology. With 50 or so performers singing from bedrooms, bathrooms and closets, it was quaint and urgent, tender and effective: from Bernadette in a dressing gown to Ben-and-Beanie in perfect split-screen sync.

As the pandemic wore on, the new technology became a theatrical force, allowing, among other things, actors to reunite for shows they’d done earlier. A week before I began “Meet Me in St. Louis,” I rejoined cast mates after 17 years to perform, without rehearsal, Wallace Shawn’s bleak and funny “Aunt Dan and Lemon.”

This “Meet Me in St. Louis,” where no one would actually meet, in St. Louis or anywhere else, would, however, be uniquely ambitious. It became the toy under the Christmas tree in the biggest box, the one that requires much assembly, staring at parents dauntingly once the wrapping is off. Though shows have been streamed live from a stage, “I don’t think there has been a book musical with actors separate, home alone filming,” John Bell, our musical director, told me. “Never before!”

Then there were the props that showed up like familiar friends — bowler hats, briefcases, tennis rackets. A potato, a piece of cake, a folding table. This life raft of remote performing had become a larger vessel — an intricate art form, an ocean liner of its own.

Irish Rep has been creating what they call “Performances on Screen” since May, so the logistics were laid out in advance. We would set up an area of home as a green screen studio. Everyone was to have an iPhone, propped up on a tripod (which had also arrived by mail) and faced toward the laptop screen. (The tripod had the odd knack of squeezing the emergency button on my phone, bringing the Bronxville police to my door three different times in mid-song.)

We would be expected to do our own makeup and period hairstyles — for me, this meant research into how a Gibson Girl pulled off that trademark triangular hair volume. Every day Brandon Cheney, the technical director, would guide us in placing lights to capture night, day or indoors, given the scene.

We would film our own work, and then download the footage each evening to the editor. Later on, our images would be superimposed over painted backdrops depicting period St. Louis interiors.

But as we worked alone, all we would see was green.

The first day of work began with an email and a Zoom meeting link, leading to some 20 screens popping alive with a familiar flush of laughter and belonging. A new show! A cast! A family begins! I was delighted to meet the diverse group who would be my daughters: the Egyptian-American Ahmed playing Esther, the role originated by Judy Garland in the film, and my other children played by Japanese-, Filipino- and African-American actors.

The cast was all over the East Coast — Brooklyn, Baltimore, Hell’s Kitchen, the Wi-Fi-challenged Pennsylvania woods — while our director, Charlotte Moore, was, serendipitously, in St. Louis, six minutes from Sally Benson’s childhood home on Kensington Avenue, which had inspired The New Yorker stories that were adapted into the movie. (The stage version came later, in 1989.)

Difficulties, predictable and unpredictable, emerged quickly: Who were we playing to, or looking at? Ciaran O’Reilly, the theater’s managing director, urged us to directly address the camera lens, which after editing would sometimes be the audience, sometimes a scene partner.

With so much tech to master, there was little time for the key question: What is this show about? The plot has Mr. Smith, the family’s father, offered a promotion to New York City, a move his daughters dread. After all, St. Louis in 1904 was not a provincial city, but a proud metropolis.

I supplied a few photographs I had found online of the family obsession, the 1904 St. Louis World’s Fair, including the beautiful Ferris wheel, the largest in history, built by Mr. Ferris himself.

And I shared a few Lewis Hine photos of 1904 New York that I had on hand, of crowded streets and immigrants in tight quarters, as well as of the launch of the city’s subway that year — the vast underground web of trains had a more sinister feeling than the delightful open-air trolley famously clanging in song in our show. (I was secretly grateful for my daughter’s recent eighth-grade project on the topic.)

But as the work began, I couldn’t let go of the image, and the meaning, of the Ferris wheel. Everybody, isolated, in their own pod, as the wheel goes around and round. Technology that unites and separates us at once.

I became acutely aware how much the structure of theater rehearsal can usually be found in the structure of what actors call “the room.” In the room of a normal production, half the work is done via a byzantine choreography of whispers between colleagues.

The author whispers to the director about firing the pianist, while the leading lady flirts with the leading man ( both because it builds texture and because, why not?). The young dancers test the authority of the choreographer and wonder what the writer even does. All taking place through implication and intrigue, in corridors and crannies, on a lunch break at the deli or a good laugh in the ladies’ room.

In the Zoom musical, the corridors and crannies are gone; everything is shared. As a result, conflict — which dances with collaboration as the lifeblood of theater — gets externalized instead of sublimated.

Like every actor, for instance, I know what lighting “works for me,” but I was shy of letting everyone in on it, for fear of seeming like the Norma Desmond of Zoom.

Slyly, I placed the extra reflector (sent but never discussed) on the floor — so I looked younger — using my own ring light, and raised the tripod just a bit.

The stage manager, watching from his Zoom window, was … curious, and suggested I lower the camera to my eye line. I knew that was not great for my jawline — but on Zoom there was no private space to have this normal tussle. It took some effort, and a second Zoom room, alone together, to find a solution.

(And if a soprano wanted to flounce out of the room, how could she do it on Zoom? Press “Leave Meeting” on the bottom right? How unsatisfying. They should make special software that sighs and slams a door when you press that button.)

There’s a perceptual concept called the “uncanny valley,” which describes the feeling of discomfort humans feel when they see something that looks or moves almost — but not exactly — like a living being.

By speaking to colleagues we couldn’t see against settings we couldn’t envision, we seemed to be entering it.

John Bell, our music expert, had his own uncanny valley to traverse: Computer technology can make music sound too perfect. Many pandemic projects have allowed musicians and singers to collaborate at a distance thanks to “click tracks,” where a computer keeps the consistent beat. But this can leave music feeling square, unmusical.

With “Meet Me in St. Louis,” Bell had to try to capture something of the old, shared disorder by adding uneven spacing to the backing track: “I wanted to retain a sense of the live feeling,” he explained. “Breathing room and inaccuracy is live performance. In a way, I had to perfect the imperfections.”

To see if he got it right, “I would dance around my apartment in Manhattan,” he said. “ I had no other bodies to make music with, and I had to create it all myself, alone.” He chuckled. “If anyone had put a hidden camera in here, they wouldn’t believe their eyes.”

My solo was a song being restored to the score, the never-recorded “I Heard a Bell,” which had been written for the stage version, then discarded. “How do you know when you are in love?” Esther asks, and her mother shares her own romantic secrets: “You’ll fall apart, but bit by bit, the broken pieces of yourself will start to fit … a bird will sing/ a bee will sting, a bell will ring.” It’s a beautiful moment, a daughter allowing her mother to show a hidden part of herself.

I felt a dash of Momma Rose in myself — ambitious for my child, not to be famous, but to be bold in love. Yet I was singing without looking into Shereen’s eyes, imagining what she might be doing and feeling. I missed her terribly, even though she was nearby on my laptop.

On the last day of filming, Shereen sat by the would-be Christmas tree with her sisters, sad to face the last holiday in their cherished home. One of her young co-stars was missing, having been diagnosed with Covid a little while earlier. And Shereen herself was actually kneeling on her own bare floor in Baltimore.

Like a little girl addressing imaginary dolls, she sang with vehement tenderness the score’s most indelible song: “Through the years we all will be together/ If the fates allow/ Until then, we’ll have to muddle through somehow/ So have yourself a merry little Christmas now.”

“Oh, my goodness,” she said afterward, moved to tears. “That hit me like a ton of bricks.”

She repeated the lyric: Next year all our troubles will be out of sight. The cast stood by, each of us listening from a separate window, stilled by her emotion.