Hear tracks by Palberta, Anderson .Paak, Chai and others. 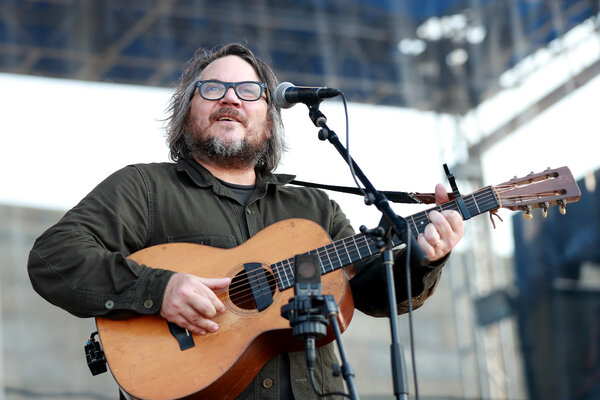 Every Friday, pop critics for The New York Times weigh in on the week’s most notable new songs and videos. Just want the music? Listen to the Playlist on Spotify here (or find our profile: nytimes). Like what you hear? Let us know at [email protected] and sign up for our Louder newsletter, a once-a-week blast of our pop music coverage.

The Wilco frontman Jeff Tweedy has a book coming out next week called “How to Write One Song,” but in the past few months he’s finished at least 10 more than that: “At the beginning of the lockdown I started writing country songs to console myself,” he said when announcing his forthcoming solo album, “Love Is the King,” which is out Oct. 23. “Folk and country type forms being the shapes that come most easily to me in a comforting way.” “Gwendolyn,” the latest glimpse of the new material, has a rumpled sweetness that lands halfway between Kurt Vile and a welcome throwback to “Mermaid Avenue”-era Wilco. While his guitar gently weeps, Tweedy sets a scene that’s both surreal and acutely felt: “Sun beating down like a big trombone/That’s right when I start missing home.” He also enlisted the help of a few famous friends (Jon Hamm, Norah Jones, Elvis Costello) for its video, which doubles as a trippy wear-a-mask P.S.A. LINDSAY ZOLADZ

Palberta, ‘Before I Got Here’

“Before I Got Here” is the longest song that the gonzo-punk trio Palberta has ever written — which isn’t saying a whole lot, since it’s only three and a half minutes long. But for a band whose angular, deliciously off-the-wall 2018 record “Roach Going Down” was full of antsy one- and two-minute tracks (that generally contained more ideas and personality than a lot of songs triple their length), this represents an embrace of relatively more traditional song structure. “Before I Got Here” — the sugary first single from “Palberta5000,” which will be out next year — still sounds distinctly Palberta, though: Think the rubbery post-punk of ESG or Delta 5, updated with a healthy dose of millennial weirdness. ZOLADZ

Partly produced by Timbaland, Anderson .Paak’s latest single, “Jewelz,” is a breezy, fleet-footed, feel-good jam that evokes the feeling of walking down the street without a care — remember that? It’s been a long week. Crank this up and try to feel happy (or at least “Happy”) for three minutes. ZOLADZ

Afrobeats infiltrates R&B yet again, as Sevyn Streeter — a songwriter who has collaborated with Ariana Grande, Alicia Keys and Chris Brown — is joined by the Nigerian songwriter Davido, a grainy-voiced Afrobeats star who specializes in love songs. In “Kissez,” he makes promises as she wonders if they’ll last, while their voices entwine more closely with each verse. Binding them ever more tightly is a lilting Afrobeats vamp produced by Bongo BytheWay, who was born in Nigeria and raised in the United States. It’s just four chords, mostly guitar, voices and percussion, but its layers are endlessly varied. JON PARELES

Chai, ‘Donuts Mind if I Do’

Though the title suggests a sugar rush, “Donuts Mind if I Do” finds the Japanese band Chai at its most sonically chill: “Don’t mind if I do,” the four-piece sings in unison during a chorus that drifts as pleasantly as a cumulus cloud. For the uninitiated, though, it serves as a welcoming gateway to the wilder, weirder world of Chai, whose previous album “Punk” combined spunky riffs, sing-songy vocals and messages about beauty standards and self-acceptance that resonated across cultures. Not to mention some excellent choreographed dance moves. ZOLADZ

Kaytranada featuring Tinashe, ‘The Worst in Me’

Second thoughts are no match for desire as Tinashe sings, “This ain’t how it’s supposed to be/You bring out the worst in me.” Kaytranada’s production is full of shadows, with deep, skulking synthesizer bass and keyboards wafting in behind the beat, while the airy tickle in Tinashe’s voice makes clear that she’s succumbing to temptation happily. PARELES

“Freedom Exercise,” the debut album from the rising Los Angeles-based saxophonist and multi-instrumentalist Josh Johnson, is a gem that seems to have been plucked from the same pocket as Makaya McCraven and Jeff Parker’s recent work. Johnson has played in both of their bands consistently, so it’s easy to understand why his mixture of hip-hop and rock rhythms and his blend of live instrumentals and rich production touch a similar nerve. He was helping those artists build their sounds in the first place. On “False Choice,” Johnson and his band alternate between a steady groove and a passage of hiccupping repetition; the track’s richest moments come when the two ideas get thrown together. GIOVANNI RUSSONELLO

Emma-Lee Moss, who records as Emmy the Great, has a global perspective. She was born in Hong Kong to a British father and Chinese mother and was raised in rural England; she moved on to Los Angeles and New York City; and she recorded her new album, “April,” in Brooklyn in 2018 after a visit to Hong Kong in 2017, before Covid-19 and China’s security-law crackdown. “Okinawa/Ubud” invokes other places in Asia; Ubud is in Bali, and the song begins and ends with the gong tones and modal scale of a Balinese gamelan. “Okinawa/Ubud” measures individual comfort against the state of the world, always a humbling perspective. PARELES

Ambling along with deceptive nonchalance, “Trick to Happy” is a laconic slice of resentful borderline depression from Afie Jurvanen, the Canadian songwriter who records as Bahamas and releases his fifth album, “Sad Hunk,” on Friday. Syncopated, choked-off guitar chords accompany some bitter post-breakup questions, like “Was it going on behind my back?” and “Am I wasting my time?” From its stolidly sluggish beat to its taciturn vocals and tight-lipped guitar leads, it’s sullen understatement all the way through. PARELES

Henriette Sennenvaldt was the lead singer of the Danish group Under Byen, which had a penchant for floating abstractions. She’s slightly more down-to-earth, and perhaps wryer, in “New Skill.” That skill, she whisper-sings, is “being interested,” adding that it “took a lot of hard forgetting and some serious patience.” The music is a reverie that moves in slow, jazzy breaths and unexpected pauses. Horns, electronics, electric guitars and wordless vocals appear and drift away. Her goal, she confides at the end, is to “look at everything defenseless.” PARELES

“Silver Ladders” is the title song of the new album by Mary Lattimore, who plays the harp in both classical and untraditional ways. Patterns and melodies from plucked strings run through this meditative track, but electronic and acoustic reverberations mingle to make it at once more intimate and larger than life. PARELES

The cornetist Ron Miles released the album “I Am a Man” in 2017, full of laments for an already broken world that seemed to be further coming apart. It was a head-turner of a record, for a Denver-based improviser who had been due greater recognition for decades. Miles’s gleaming cornet shone through the loose and dusty sound of his quintet — Jason Moran on piano, Bill Frisell on guitar, Thomas Morgan on bass and Brian Blade on drums. On Friday, Miles released his second album with that group, “Rainbow Sign.” This one was written with more domestic inspiration in mind, after the death of his father, for whom Miles had become a caregiver. On “This Old Man,” Miles and his band mates unite around shared melodic lines but never hold onto them too tightly, allowing a sense of mischief and play to come in. RUSSONELLO