BRIDGEHAMPTON, N.Y. — There was a moment earlier this decade, during those last, panting moments when we all still revered technology companies, when some Silicon Valley dreamers informed us that they would transform the market for painting. Get ready, they told us, for the rise of nifty 3D printers and the death blow they would deal to artistic creation. Any object could be called up in minutes! New art would come straight out of the extruder! Perfect replicas of masterpieces would become universally accessible; every Van Gogh and Velázquez might soon be worthless.

Any artist could have informed them that this was a category error. Painting is an artistic medium, not a technology in itself. And painting, like every artistic medium, acquires meaning, importance, and indeed financial value through a complex net of perceptions that stretches well past the surface of the canvas.

Few painters today engage with the challenges of new technology as persuasively as Jacqueline Humphries, who is presenting an ambitious and formidably intelligent exhibition of fresh work at the Dan Flavin Art Institute — housed in a former church here in the Hamptons, and managed by Dia Art Foundation. Upstairs, Flavin’s sculptures of fluorescent tubes cast their light as usual against the institute’s white walls. Downstairs, Ms. Humphries is presenting 10 new works that also glow, thanks to fluorescent paint jobs and overhead black lights. (It’s O.K. if your white shoes start shining; Labor Day came early this year.)

Though some first appear to be canvases, none are “paintings” as such, or at least not paintings as we usually understand them. Most are in fact resin objects, some made by casting pre-existing paintings with traditional molds, and other produced by — what do you know?! — 3D printing.

Ms. Humphries is best known for shimmering, burbling abstract paintings that agglutinate stenciled marks, typographical stutters, and deceptive spills and splashes that in fact result from careful composition. Over a decade, she has pushed each canvas to a limit point at which it exceeds the possibilities of photographic reproduction — many produce a moiré distortion when photographed, and take on new forms and inaccurate colors on the screen of a smartphone.

But oil painting is not her sole medium, nor do her artistic efforts end at the edges of the canvas. She has also experimented with custom illumination, particularly with ultraviolet light (or “black light”), which imbues fluorescent-painted canvases with the radiance of computer monitors. This dual engagement with technology and lighting makes Ms. Humphries an ideal (if somewhat naughty) fit for an exhibition at the Flavin Institute — where her use of black lights makes the gallery appear like a through-the-looking-glass reflection of Flavin’s art.

A fluorescent purplish-pink artwork here titled “Painting,” to take one example, is not precisely a painting, but a urethane resin cast of an earlier work on canvas that Ms. Humphries made in 2016. From a distance it appears nearly monochrome, but get up close and you’ll see rivers of dots and half-moons, slightly raised like the treads of a car mat. They are punctuation marks, and, handily for a critic, “Painting” is the rare painting you can quote. Its surface says “ 🙂 🙂 🙂 🙂 🙂 🙂 🙂 🙂 ” — although, if you sat in traffic on Route 27 for too long, you may prefer to read these smileys as frownie faces rotated off their axis.

These emoticons — predecessors of emoji, composed purely of typographical elements and not imagistic on their own — were initially produced by applying paint through laser-cut stencils. Human emotion gets standardized into generic, two-character textspeak, but then turns, through Ms. Humphries’s lashing of oil paints through the stencil, back into lifelike form.

Here in Bridgehampton they’ve gone through a further translation, from paint into resin, and Ms. Humphries has added an element to the cast painting’s surface: a piece of driftwood attached near the work’s midpoint, slathered in glowing chartreuse pigment. Or is it not driftwood? While the typographical smiley faces have taken on tactile, almost organic form, the “driftwood” appears pixelated and glitchy, an unconvincing stand-in for biological reality. This is a cast, too, 3D printed at an intentionally insufficient resolution that reveals its digital source.

So “Painting” is a crush of deceptions and deflections: a painting that is actually a sculpture, a face that is actually punctuation, a tree that is actually code, a source of light that is actually reflecting light. Several other cast works here use the same bait-and-switch techniques, like “Full Sheet Green” and “Full Sheet Violet,” which first appear to be painted plywood but reveal themselves as etched resin blocks, or “Collection,” a table of glowing, 3D-printed driftwood and shells.

But Ms. Humphries is not offering these warped works to deflate the possibilities of painting, or to aver that all art is a conceptual put-on. Quite the opposite. The resin casts are elements in a chain of painterly creation, in which the 3D-printed elements — far from putting painting out of business — function like crummy camera-phone shots of absent originals. What you are looking at (and, perhaps, what you photograph on your glowing phone) is a node in a network, linking up with earlier referents by Ms. Humphries, by Flavin, by other artists and in the natural world. 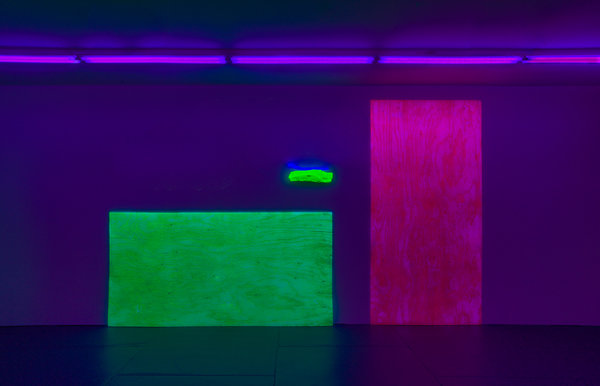 How can art evade both the philistinism of Silicon Valley and the revanchism of technophobes? Ms. Humphries and other digitally minded painters start by acknowledging that new technologies have constantly reshaped painting — from printmaking in the 16th century to photography in the 19th to social media today. These once-new technologies changed the terms of our perceptions, making one style obsolete and another newly relevant, one image sterile and another persuasive. The task today is to paint the experience of seeing in a world mediated by screens, and these black-lit works continue that exploration, riffing off the Flavin Institute in a minor key.

[Jacqueline Humphries’s painterly marks at a 2017 show at Greene Naftali.]

Like so many of the artists beatified at Dia’s permanent collection in Beacon, Flavin saw his minimal art as a tool to modify viewers’ perception, and privileged bodily and visual experience above all. But Ms. Humphries, along with painters as different as Laura Owens, Wade Guyton and Michael Williams, understands that visual and physical perception are no longer sovereign; even the body and the senses now have been absorbed into digital networks of surveillance and control. Today your retinas get scanned at airport security, and your eyes can activate your credit card when you look at your phone’s front screen. Needless to add that when you gaze at an image today, the image is gazing back — in the form of cookies, beacons, tracking pixels and JavaScript tags, all of which log your looking as harmless or malign analytics.

This is the profoundest impact of digital technology on contemporary art: it has taken away the innocence of the senses, and put an entire surveillance system between us and our images. To paint in such circumstances requires a new approach to image-making that exploits the gaps and glitches of digitization to reveal the workings of our eyes and our economy. Ms. Humphries has cleared a path, more deeply every year, by which the conceptual and the gestural challenges of painting can come into registration, and the frustrations of sensory perception resolve into intellectual delight and political disquiet. Or, to put this review in a language appropriate to her art, both 🙂 🙂 🙂 🙂 🙂 and 🙁 🙁 🙁 🙁 🙁 .

Jason Farago is an art critic for The Times. He reviews exhibitions in New York and abroad, with a focus on global approaches to art history. Previously he edited Even, an art magazine he co-founded. In 2017 he was awarded the inaugural Rabkin Prize for art criticism. @jsf