Opera folk use the expression “park and bark.” This denotes an old-fashioned kind of acting in which singers take up a fixed position onstage, “park” there and sing, the implication being that opera performers attend solely to their “barking.”

This parking can be an art, too: Since stillness in opera is accompanied by music, its eloquence can be immense. But when singers prove skilled in movement, the physical side of opera becomes related to choreography: It connects humans to music in terms of space, time and meaning. This side of opera keeps growing in sophistication.

Take the Metropolitan Opera’s recent staging of Nico Muhly’s “Marnie.” The title character is often shadowed by four look-alike silent Marnies, dressed in identical early-1960s couture in strikingly different colors; at other times, she’s shadowed by 10 silent men in gray. The other Marnies, moving like the troubled heroine’s echoes or auras, amplify the drama’s central psychological mystery: Who is Marnie, what is she?

In a memorable fox-hunt scene, the gray men lift Marnie up — she’s fallen from her horse — and suspend her in the air, in a moment out of time. The choreography is by Lynne Page, the direction by Michael Mayer — but where does one start and the other stop? It’s impossible to know.

There probably have been productions for centuries in which opera direction has been akin to choreography. The Morgan Library & Museum has a libretto for Verdi’s “Aida” that the composer annotated while supervising its early Italian performances. His notes, although incomplete, are often very precise in directorial matters.

For large ensemble scenes, in which the opera abounds, Verdi is remarkably like a choreographer in the way he attends to pattern. For intimate ensembles, he indicates precise details about the varied directions in which singers should face, as well as aspects of expression. I’ve seen performances of “Aida” far less focused than the one he notates.

Some of the most eloquent choreographic imagery of 2018 occurred in the Met’s production of Wagner’s “Parsifal,” revived in February. Especially in Act I, François Girard’s direction charges the whole stage space with contrasting geometries. On our right, the Knights of the Grail, dressed in white, make neat, concentric rings. On our left, a silent chorus of shadowy women makes quite different lines. These women, dressed in black, their heads veiled as if in mourning, are half silhouetted.

Who are these women? They’re not in Wagner’s libretto. He wrote just one female character, Kundry, and a singing chorus of sirens, the Flower Maidens, who appear only in Act II. Kundry, traumatically divided between carnal and spiritual forces, and the Flower Maidens are femmes fatales who try to lure Parsifal (and by implication other knights) from the path of virtue; Wagner’s knights, though they’re stirring and needy in other ways, are conceived as ludicrously chaste. Because large parts of the drama concern a male fraternity whose members seldom mention — let alone esteem — women, “Parsifal” has been called misogynistic.

So this production deepens the opera’s meanings. At first, these additional women seem widows of the dead Grail knights. In due course, however, they seem as divided as Kundry. Possibly, it’s they who return as the seductive Flower Maidens of Act II. Then, in Act III, they’re part of the Grail community, no longer an exclusive men-only club but a wider, saner group. On each appearance, silent or singing, stationary or in motion, they seize our attention because of their stance, positions, groupings, gestures. 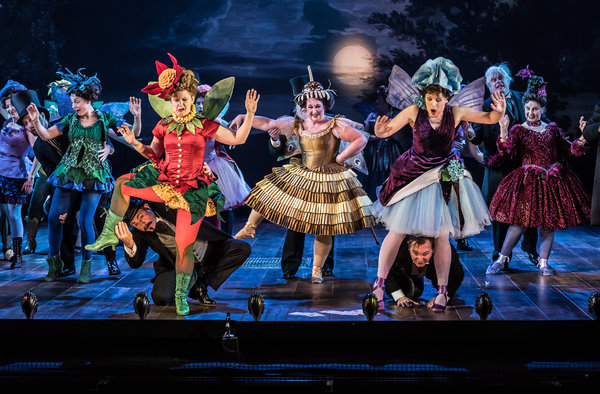 The “Parsifal” choreographer, Carolyn Choa, is also the director-choreographer of the Met’s “Madama Butterfly,” conceived by her husband, Anthony Minghella, who died in 2008. One particular layer of this “Butterfly” production, last seen in March, is its attention to the heroine’s past as a dancing geisha; another is its use of a puppet for her child. At all points, it demonstrates a choreographer’s sense of drama within time and space.

You can tell why a number of choreographers over the centuries, not least George Balanchine, Frederick Ashton and Mark Morris, have staged whole operas, not just their dances. Still, directing singers is a very particular art: Try to make them move too precisely to the music, and some of them look like unmotivated marionettes, the more so if they have to share the stage with dancers.

Nonetheless, the last few years have also brought productions in which singers and dancers truly integrate. In Stefan Herheim’s staging of Verdi’s “Les Vêpres Siciliennes,” for the Royal Opera in 2013, the action occurs not in medieval Sicily, as Verdi intended, but in the theater for which he wrote it: the Paris Opera. Regarded as the world’s most prestigious opera house at the time, the Paris Opera obliged composers to include extensive ballet scenes in each work; Verdi wrote his most extended ballet for “Vêpres,” which had its premiere there in 1855.

Mr. Herheim’s production, often absurdist, makes ballet a frequent accompaniment for the stage action. When I saw the revival in fall 2017, the marvelous bass Erwin Schrott, in the role of Procida, sang his great aria “Et toi, Palerme,” while the female corps de ballet, like sylphs from the Romantic ballet, danced around him. He even partnered one of them, providing admirable physical support while singing.

André de Jong’s choreography is deliberately generic; and yet the ballet Romanticism of that scene shows Procida’s yearning soul. The characters in this “Vêpres” inhabit not one plane of history but two: both the Paris of the premiere and the medieval Sicily of Verdi’s opera.

Is it mere chance that so many of the most inventive opera choreographers are women? Earlier this year, Lizzie Gee made the dances for English National Opera’s new production of Gilbert and Sullivan’s “Iolanthe,” a British comedy about fairies and aristocrats. The director was Cal McCrystal (“One Man, Two Guvnors”), who makes it deliberately, happily outrageous.

Though this company’s chorus has been dancing in many productions over the decades, I was amazed to see the enthusiastic precision with which Ms. Gee got these singers, as fairies, doing specific ballet steps: You could feel how all of them had a whale of a time. Her choreography closely, lovingly and hilariously refers to the fairy scenes of classically Romantic ballets, including “Giselle” and (especially) Ashton’s “The Dream.”

Yet more gobsmacking was the quantity of ballet performed by the baritone Marcus Farnsworth. Gilbert and Sullivan make his character, Strephon, half-mortal (the top half), half-fairy; Mr. Farnsworth’s lower half does a remarkable amount of ballet steps. He lifts and partners, too.

There are many species of music theater, and of movement. Phelim McDermott’s production of Philip Glass’s “Akhnaten” — originally for the English National Opera in 2016, and expected for the Met in fall 2019 — evokes the two-dimensional tableaus of Egyptian art while making them vibrate and ripple with marvelously judicious musical effect. Mr. Glass’s music, famously, employs loops and repetitions in its orchestral accompaniment: Mr. McDermott matches these, with the visual marvels achieved by the skills group Gandini Juggling.

The ensemble juggling — often small-scale, sustained over long periods and patterned across areas of the stage — creates a kind of music drama I’ve never known: an extra layer of suspenseful background excitement against which the often ceremonious movement of the leading characters takes off. Here, as in “Parsifal,” “Marnie” and other recent stagings (in Verdi’s notes for “Aida,” too), opera, not merely its supplementary dances, becomes choreography.