Should we exercise outside when the air is smoky? With smoke and ash from major wildfires still blanketing portions of California and the Northwest and murky plumes wafting across the nation, that issue is top of the mind for many of us and likely to remain a concern well into the future.

To learn more about exercise and smoke, I talked with pulmonologists, physiologists, biostatisticians and other scientists. What follows are their expert opinions about whether it might be better to stroll or streak through smoke; which masks help; when to move workouts indoors; and if we should bring our dogs along to exercise in the haze.

Where There Is Smoke …

Before deciding whether to exercise outside, we should know what inhaled smoke may do to our insides. The details are not reassuring.

Inhaling large volumes of wildfire smoke can inflame lungs, says Jennifer Stowell, a postdoctoral associate at Boston University’s School of Public Health, who has studied the health effects of wildfires. Some research suggests that wildfire smoke “may be more toxic” to the lungs than standard urban air pollution, she says, since it contains a distinct mix of particulates that activate inflammatory cells “deep in the lungs” while hindering other cells that can dampen the inflammatory response later.

Those same particles also can migrate from the lungs and “disrupt and upset the natural tone of blood vessels,” says James Hull, a sports pulmonologist at the Institute of Sport, Exercise and Health in London. In past studies, people who exercised while breathing in diesel exhaust, a pollutant somewhat similar to wildfire smoke, developed fleeting changes in how efficiently their blood vessels dilated and contracted as blood flowed through them. These changes could, over time, contribute to blood pressure problems and other cardiovascular issues.

Is Orange the Limit? 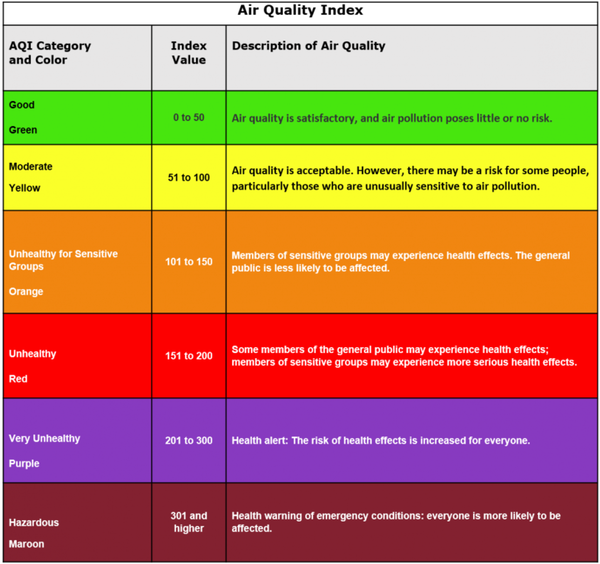 Orange signifies “unhealthy for sensitive groups” on the color-coded Air Quality Index devised by the Environmental Protection Agency and is probably the highest alert at which it is advisable for most people to exercise outside, says Matthew Strickland, an associate professor of health sciences at the University of Nevada, Reno, who has studied links between wildfire smoke and emergency room visits.

“My opinion is that it is reasonable to exercise on ‘unhealthy for sensitive groups’ days,” he says, if you are not among those sensitive groups — such as people with asthma, the elderly and children — and “if you do not experience acute symptoms,” he says. “But I would avoid exercising outside on days classified as ‘very unhealthy’” — purple — or “hazardous” — maroon.

Red-level or “unhealthy” air quality also is probably best avoided. “I would caution anyone against outdoor exercise when the A.Q.I. is ‘unhealthy’ or higher,” says James Crooks, clinical assistant professor at the Colorado School of Public Health and associate professor of biostatistics at National Jewish Health hospital in Denver, who has studied the health effects of Colorado wildfires.

Be sure to check your local air quality just before heading out, Dr. Strickland says, since pollution levels change throughout the day.

The Advantages of Speed

Most of us might assume low-intensity activities would be preferable in smoke, since we wouldn’t be breathing as hard. But, “surprisingly, there is not yet any evidence that, for a given duration, higher-intensity exercise is more harmful than lower-intensity exercise,” says Dr. Michael Koehle, the director of the Environmental Physiology Laboratory at the University of British Columbia.

He was a co-author of a telling 2014 study in which 18 young male athletes pedaled stationary bicycles for 30 minutes on four separate visits. During two sessions, they rode gently while wearing masks that pumped in normal air on one ride, and diesel fumes on the other. During the remaining sessions, the cyclists pedaled strenuously, while again breathing normal air and then polluted air.

Throughout, the scientists checked parameters of lung function and, to their surprise, found that riders’ lungs seemed to labor more when they pedaled lightly in the polluted air than when they hammered.

A subsequent 2019 study using the same methods found that riders pedaling hard while breathing pollutants likewise did not develop more markers of incipient inflammation in their bloodstreams than they did while cruising.

Of course, diesel pollution is not wildfire smoke, and both studies focused on hardy male athletes. But the findings are suggestive, Dr. Koehle says. “If I had to choose between a short, 20- to 30-minute, more-intense bike ride or a longer, easier, three-hour ride, based on the science, I’d recommend the shorter, more-intense workout, just because it would lead to two-and-a-half hours less air-pollution exposure.”

Is there a time limit? “I’d say there is no clear time cutoff based on the science,” Dr. Koehle said. But if the air quality is orange or better, “something in the range of 30 to 60 minutes” spent exercising outside “seems reasonable.”

Masks may help a little, says Dr. Crooks, of the Colorado School of Public Health. “An N95 respirator mask, worn properly, can filter out some of the particles,” he says. But it “will do little to protect against harmful gases in the smoke, such as carbon monoxide.” Plus, N95 masks are still in short supply because of the ongoing pandemic and, to be effective, must fit snugly against the face, which can feel intolerable during exercise. The looser facial coverings many of us wear now to lower our risk of spreading the coronavirus to others will provide negligible protection against wildfire pollutants — though they remain “a moral imperative” during the pandemic, he says.

Is It Safer Inside?

“A ballpark estimate” is that particulate levels indoors “may be roughly half of outdoors,” depending on “how leaky a building is,” says Robert Laumbach, an associate professor at the Rutgers School of Public Health who researches wildfire smoke and health.

On days with poor air quality, exercising inside, with windows tightly closed, an air-conditioner on “recirculation mode” and, if you own one, an air purifier with HEPA filter humming, “can help to substantially reduce exposure to particulate-matter air pollution,” he says.

But those measures also run counter to some advice for combating coronavirus spread, Dr. Strickland points out, which recommend open widows and freely circulating air, especially in rooms containing many people. So, if smoke is present, it may be advisable to skip indoor workouts at a gym or other shared spaces.

Should I Bring Bandit?

“What I always say is that ‘air pollution is bad; really bad. But exercise is good; really good,’” Dr. Koehle says. “Not exercising is not good for our health or our dogs’ health.” So, check current air quality and if it is orange or better, walking or jogging with your healthy dog should be fine.