“Don’t they understand this is a due process concern?” an attorney told BuzzFeed News. “People are rotting in detention.” 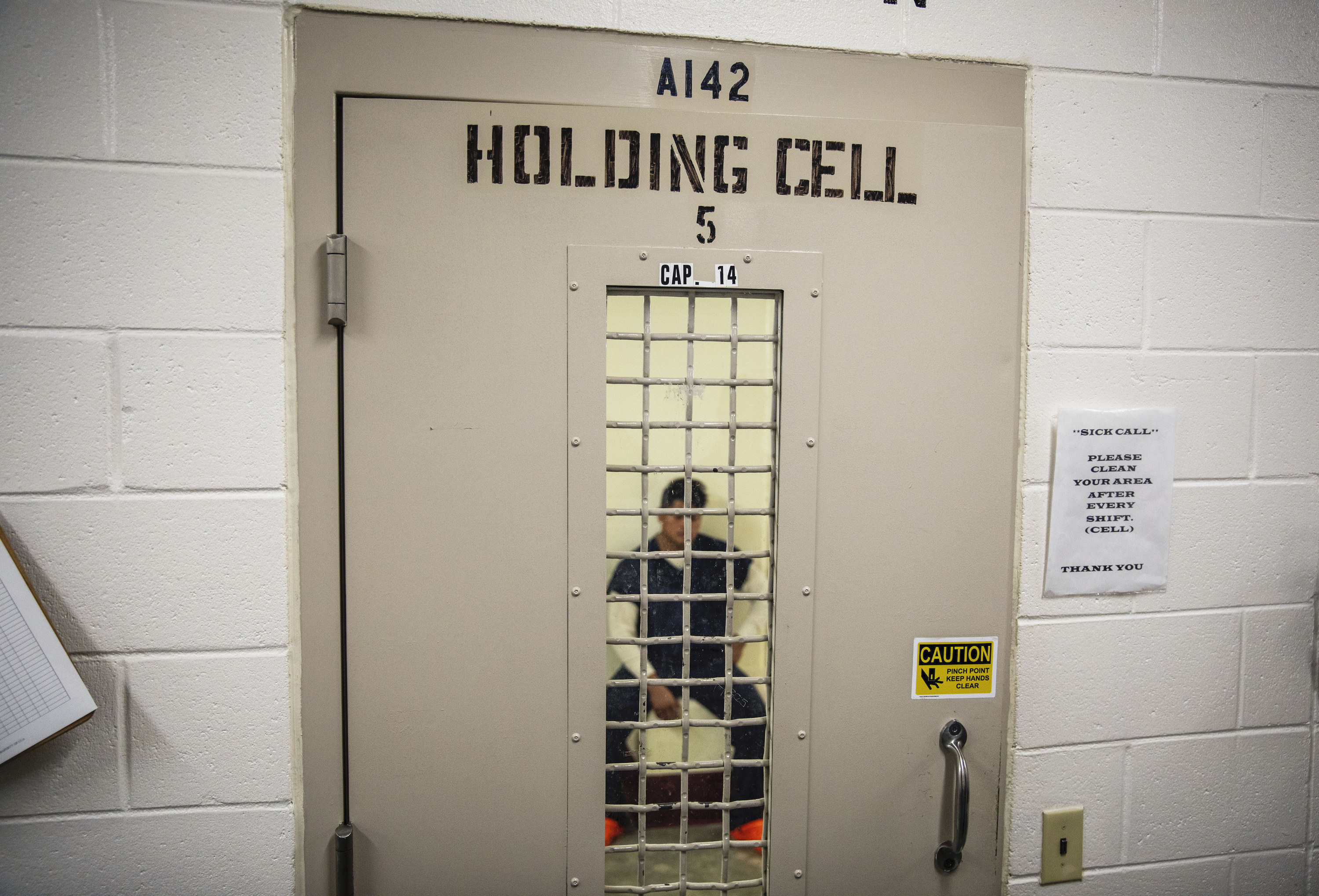 A detainee sits in a holding cell at detention center in Lumpkin, Georgia.

Attorneys with clients held at an immigration detention center in New Mexico have found that at least 174 immigrants were held for months without a bond hearing, in some cases despite repeated requests from lawyers.

After attorneys complained and threatened a federal lawsuit on Jan. 27, the immigration court inside ICE’s Otero County Processing Center started scheduling bond hearings again this month. But lawyers are concerned the problem will continue and expand to other areas, leaving immigrants languishing in ICE detention.

Attorneys and immigration judges said they were told by court administrators the delays were due to bond hearings being de-prioritized for other hearings. The other hearings included immigration judge reviews of credible fear interviews for Central Americans and Mexican asylum-seekers put into two new fast-track deportation programs launched by the Trump administration. Ken Cuccinelli, acting deputy secretary of Homeland Security, has said were these programs were expected to be implemented across the entire border this month.

Constance Wannamaker, an immigration attorney with three clients at Otero, said that if these programs are expanded and judges working in the nation’s backlogged immigration courts continue reviewing credible fear decisions bond hearings, one of the few avenues for immigrants to fight their cases outside of detention, delays will persist.

“Don’t they understand this is a due process concern?” Wannamaker told BuzzFeed News. “People are rotting in detention.”

The facility is run by for-profit company Management and Training Corporation in Chaparral, New Mexico. It has come under scrutiny in recent years for mistreatment of immigrants and deteriorating facilities. The Department of Homeland Security’s Office of the Inspector General found guards were putting people in solitary confinement without justification, mold in the bathrooms, and telephones that didn’t work. In December, a 40-year-old French man died at the Otero County Processing Center.

Asylum-seekers already faced an uphill battle in getting out of detention. The area the Otero immigration court is in is also one of the hardest places to win asylum. According to a complaint from the American Immigration Lawyers Association, judges in the jurisdiction granted only 31 out of 808 asylum applications, or 4%, between Fiscal Years 2013 and 2017.

Wannamaker, who said she usually gets a bond hearing after requesting it within a week of asking, now has two clients waiting since November. She said it was ridiculous to make people wait that long, especially after lawyers requested a bond hearing.

Some people at Otero had been in ICE detention since June 2019 without a bond hearing set.

Wannamaker said a court administrator told attorneys that judges had been too busy to schedule bong hearings because they were reviewing credible fear determinations, a crucial first step for asylum-seekers.

Instead of sending asylum-seekers to ICE custody for credible fear interviews to determine whether an immigrant has a credible fear of being persecuted in their home country, people in the programs are kept in CBP custody at the border and go through the process more quickly. If they get a negative determination from an asylum officer they can request an immigration judge review, which attorneys believe happens most of the time. If the judge affirms the asylum officer’s decision, the immigrant is then deported.

“Those were taking priority and judges had to do those fast because these people were in CBP custody and the administration wanted to deport them as soon as possible,” Wannamaker said. 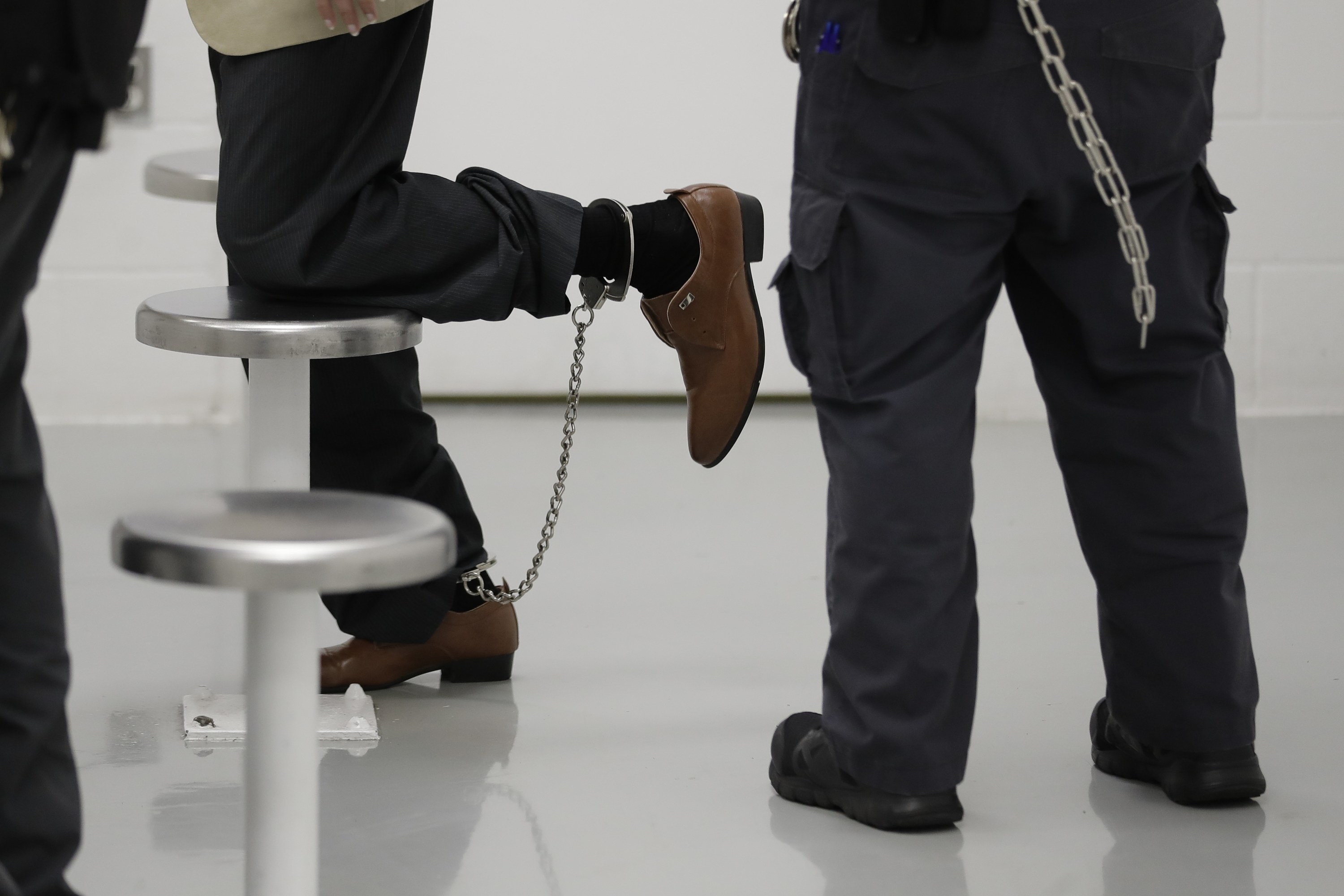 Leg shackles are placed on a detainee by a guard in an ICE facility in Tacoma, Washington.

In a federal lawsuit, Las Americas Immigrant Advocacy Center said these programs make it nearly impossible for an asylum-seeker to contact an attorney prior to the interviews or before an immigration judge reviews a negative determination.

“PACR and HARP systematically undermine the procedural safeguards guaranteed to those seeking asylum by rocketing asylum seekers through the credible fear process with no access to counsel,” the complaint said.

As of Nov. 26 last year, 392 asylum cases had been processed through PACR, according to the lawsuit. As of Nov. 27, the government had placed at least 137 asylum seekers in HARP.

Another issue attorneys said was resulting in detainees spending more time in detention without being able to ask a judge for bond are charging documents, called a Notice to Appear (NTA), not being entered by the court into the system for months after people were detained. Without an NTA being filed, the immigration court won’t schedule a hearing. Immigrants without attorneys likely don’t know they can request a bond hearing regardless.

In a statement, Kathryn Mattingly, a spokesperson for the Justice Department’s Executive Office for Immigration Review (EOIR), which runs the nation’s immigration courts, said the agency is doing the best it can to deal with the “influx” of NTAs.

“EOIR continues to leverage its resources in the best way possible to address the ongoing influx of Notices to Appear created from DHS enforcement actions upon individuals who enter — or attempt to enter – our country illegally,” Mattingly said.

Representatives for ICE and DHS did not immediately respond to requests for comment.

Judge A. Ashley Tabaddor, president of the National Association of Immigration Judges, said she confirmed NTAs were not being processed and bond hearings were de-prioritized for other hearings like credible fear reviews.

“It certainly impacted Otero,” Tabaddor said in a statement to BuzzFeed News. “There is a real concern that the PACR and HARP pilot programs will be expanded to result in yet another docket shuffling.” 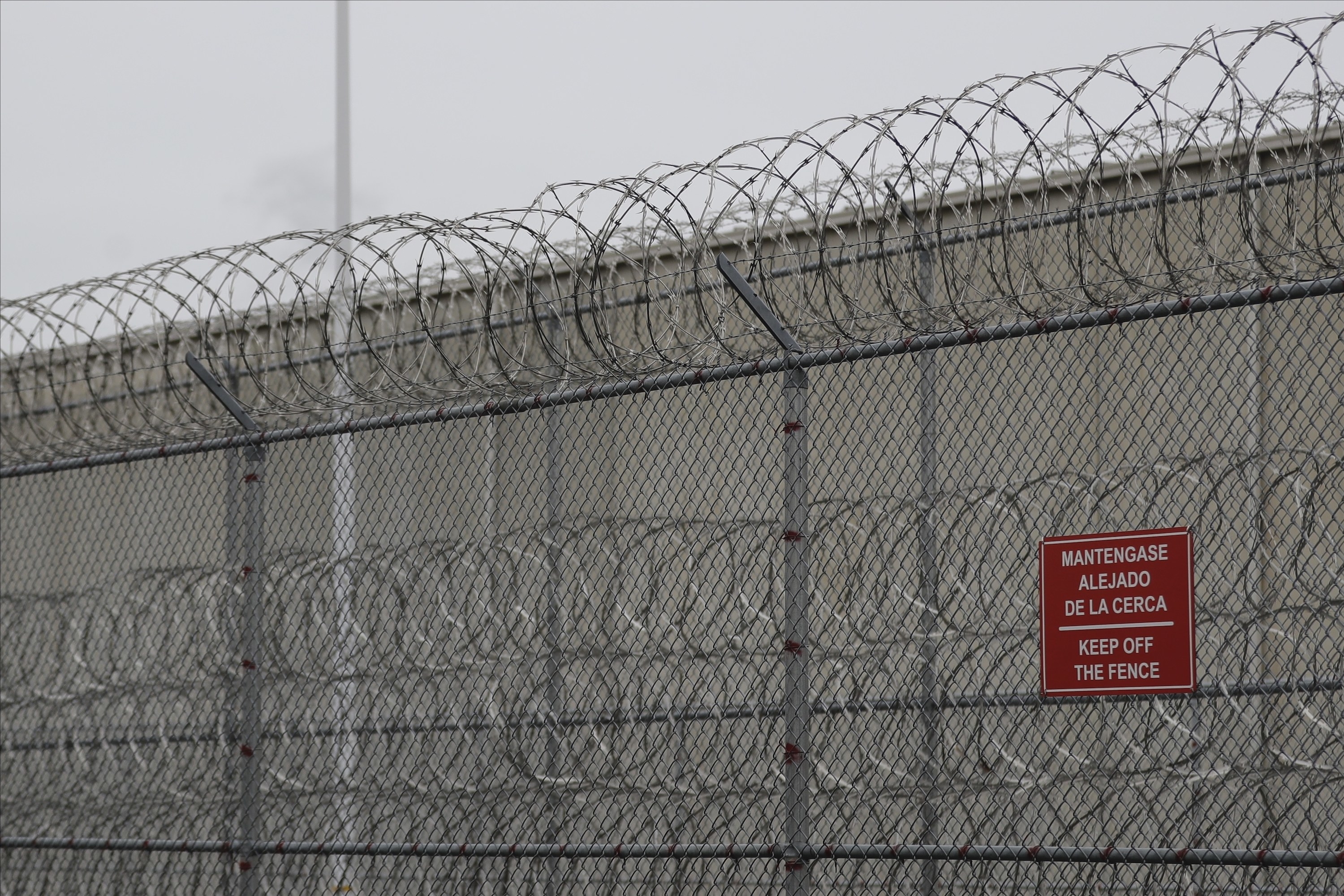 Barbed wire fencing is shown behind a sign in English and Spanish in a recreation yard in an ICE Center in Tacoma, Washington.

Linda Corchado, an immigration attorney in El Paso with clients in Otero and the director of legal services at Las Americas Immigrant Advocacy Center, said it’s troubling because immigrants have already experienced a lot of trauma before they even make it to ICE detention.

“By the time they get to us in detention, they’ve been victims of rape, extortion, kidnapping, you name it, and now you add the trauma of prolonged detention that feels like mandatory detention,” Corchado told BuzzFeed News. “It just goes to show you the level of stress they already endured if they’re willing to spend this much time with a completely uncertain future in detention rather than be deported to their home country where they fear persecution.”

Some clients question whether their attorneys are doing their jobs correctly, Corchado said. One asylum-seeker she represented had been detained since July without ever seeing the inside of a courtroom until recently.

“We’re just seeing spikes in helplessness, depression and frustration,” Corchado said. “We’re all just completely defeated, there was no hope for anything.” 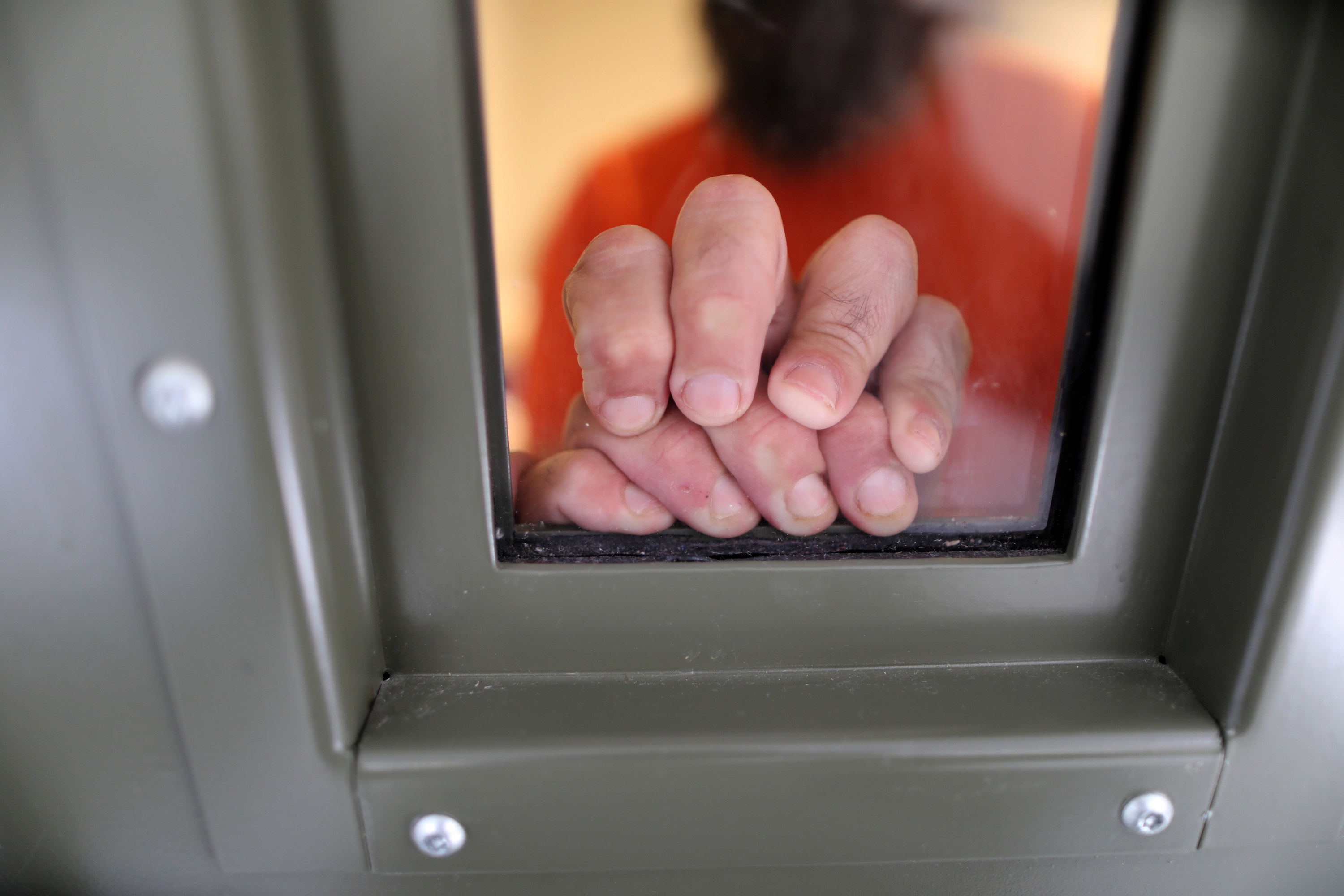 An ICE detainee rests his hands on the window of his cell in the segregation wing at the Adelanto immigration detention center.

On January 31, EOIR issued a memo stating cases should be entered into the management system within three days of the filing of an NTA. It also said custody redetermination hearings, such as bond hearings, should occur no later than three to five days after the request is received.

“I don’t think they can even comply with that,” Corchado said. “I don’t think it means there’s any relief for us. It seems like it’s just another performance measure for immigration judges and for the judges dealing with all of the administration’s pet projects. I don’t know how that’s going to factor in.”

Many attorneys see the directives in the memo as a type of “rocket docket,” Corchado said, speedy proceedings leading to more deportations at the costs of due process. She also worries about ICE detainees who don’t have attorneys to advocate for them.

“There’s a constant fear of being penalized…judges are very worried about the decisions they’re making on asylum, on cancellation, on life and death decisions,” Judge Tabaddor told the House Judiciary Subcommittee on Immigration and Citizenship.