Ten voices from around the world reflect on performing in — and ushering and seeing — some of the first live shows since March. 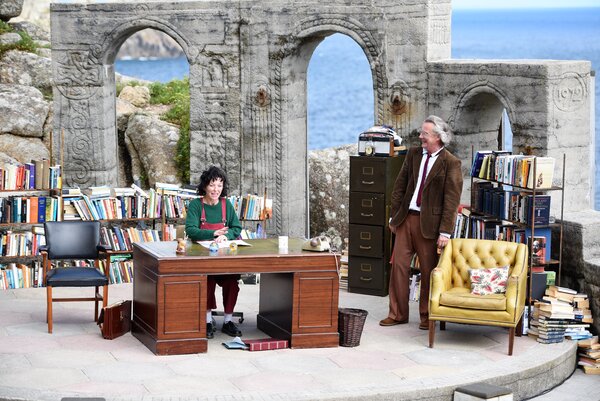 Eye contact is gone. Stilettos are swapped for slippers or sneakers. Songs are passionately delivered to laptop screens.

Since most of the theater world, including Broadway and the West End, shut down in March, the stage has become largely virtual, a space filled with bookcase backdrops and many a monologue.

But cautiously, with six-inch cotton swabs and four-gallon drums of hand sanitizer, theater is creeping back — on the side of a cliff in Cornwall, England; on stoops in Montreal; even, in a few cases, in New York. (And, as widely reported, in the Berkshires, where the first union-approved musical in the country just finished its run.)

The return, the Tony-winning lighting designer Ken Billington said, feels like a rebirth.

“It was like coming home,” said Billington, who worked on “Sleepless: A Musical Romance,” London’s first fully staged indoor musical since the shutdown. “Everyone was smiling all the time, which sounds sort of Pollyannaish, but it’s true.”

We asked artists and audiences — even an usher and a critic — to reflect on what it was like to return to shows across the world. These are edited excerpts.

The 40th anniversary tour was halted in March, but then we got the chance to do the show outdoors at the Minack Theater, which is on the cliffs on the edge of the Atlantic Ocean. It’s just as breathtaking as you can imagine.

We’d start early, at 7 p.m., so people could get away in the daylight. Every show was a 90-minute battle against the elements — it was very wild and noisy at times. We went through two named storms, Ellen and Francis. But every performer was desperate to get out there, as were the hundreds of audience members. We got standing ovations.

One night, a bunch of people took out their phone cameras, and I was like, “Wow, I didn’t realize I was acting so well!” But then I turned around, and there was the most perfect rainbow sitting in the middle of the ocean. 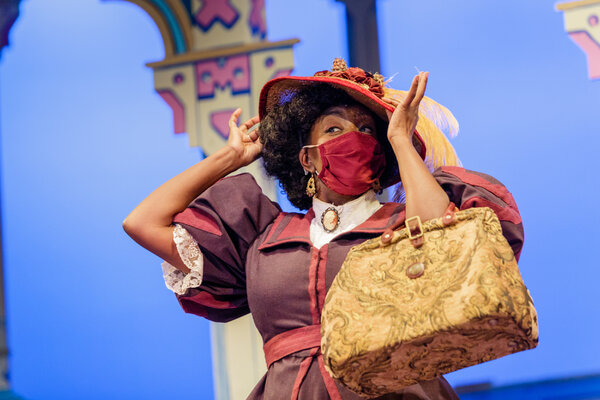 Being an African-American Dolly amid both the Black Lives Matter movement and the pandemic is something I’ll always remember.

I was thinking about the view from the stage all week before we opened — I was worried that I would look out into a sea of socially distanced people wearing masks, and I didn’t know what it would do to my performance. Singing with a mask on for an hour and a half is not an easy task — after opening night, I felt like I’d run a marathon.

I forgot how much I craved the camaraderie. Theater people sparkle — they’re your tribe. You can talk about silly things like headshots and character shoes that people out in the real world don’t always understand. I even missed the smell — that mix of electricity and dust settled into the walls.

Right away, I got shivers. The first one of these 10-minute plays, which are performed each week on stairs and balconies in the Pointe-Saint-Charles neighborhood, made the hair on my arms stand up.

The last one I saw was performed in a park, and the subject was that they’re closing some YMCAs in Montreal — it’s very political; small communities are up in arms because those places are community centers — and people were actually screaming, “No!” People who weren’t audience members and who were just walking down the street stopped to watch. It was really beautiful.

It felt like old times, even with the sparseness of the audience. They were so excited to be hearing live music.

At the last minute, I threw in a version of Ray Charles’s “America the Beautiful.” I spent most of the evening talking about politics and social justice issues, and that song speaks to the aspirations of America — America can become great, but only when humans come together.

I appreciated the ability to come together and create, but I was acutely aware of the fact that the challenge of making a living in the arts right now is formidable. So many artists are out of work, and the economic relief is lacking.

Watching a flesh-and-blood performance by Ralph Fiennes was something else. The warm gush and gratitude of it all threw my critical faculties off for a while — I wasn’t assessing David Hare’s play as dispassionately as I would have been six months ago, at first.

Of course, it wasn’t the same experience as “before.” The room felt comparatively empty due to the reduced capacity and, since we were all wearing face coverings, there wasn’t the same talkative hum. But the experience was thrilling nonetheless, from having a preshow coffee at the bar to listening in on the conversations on the way out.

We could only have about 20 people in the audience, so the applause sounded like one hand clapping. But it still moved me to tears.

Some of our best choices aren’t things we come up with on our own at home, but they’re reacting to how someone else says their line. That collaboration is what I’ve missed. There were a few times when I was able to just look into Nathan Darrow’s eyes and forget the [livestreaming] camera was there. I’m sure I didn’t look up enough because I was so happy to be looking at another actor.

My first time back in the theater was like being born again. I started doing the lighting, and it was like everything disappeared. Of course, I missed the social element — we had no place to go out after rehearsals. I’d go back to my hotel room and have a cookie. But I slept soundly, wonderfully — I bounded out of bed in the morning and went to the theater.

When the house lights went down on opening night, I thought the audience would cheer, but they didn’t. They’d been away for five months and had forgotten how to behave. But halfway through Act I, they got more lively, and by Act II, they were fine. During the standing ovation at the end, they were applauding themselves as much as the performers.

It just seemed logical that we couldn’t have a 50th anniversary season next year unless we had a 49th. We’re a small summer stock community theater housed in a pre-Civil-War apple barn in the state’s northern panhandle. We had to cancel four of our five shows, but cases are low here, so we were able to open our doors for one production in August.

It’s mostly senior citizens who attend, and they were delighted. People came up to me and said, “Thank God you’re doing something this summer. Are you doing another one after this?” And then, at our cast party, my actors did something no cast had ever done for me before: They made a donation in my honor to save the barn.

We were nervous, so we capped our first show in our pocket park in July at 65 people. But the demand was incredible — we sold out. It was like a mental-health day for people. One couple has come back for every show we’ve done since.

Of course, it’s not easy being outdoors in a city. One night two fire engines pulled into the parking lot of the building next door. There’s traffic noise, or sometimes a motorbike decides to rev its engine down Mass Ave. The occasional drunk will wander by and ask, “What’s going on?” Sometimes it shimmers; sometimes it’s annoying. But that’s the magic of live theater.

Box office coordinator and usher, “A Room of One’s Own”

The absence of physical contact was tangible — kisses on the cheek were replaced with taps on the elbow. But there was an overwhelming excitement that we were in a theater again, that we were going to see someone — live, onstage, performing right in front of us!

I’d missed talking to everyone after the performance, slowly dissecting everything we’d just experienced — and realizing that everyone had taken away something different. “Did you see how the lighting made this happen?” “Did this line make you laugh?” “I was trying so hard not to cry when this happened!”

It solidified something we’d always predicted — that the experience of attending a live performance is irreplaceable.