Times Insider delivers behind-the-scenes insights into how news, features and opinion come together at The New York Times.

The day my column about the future of the N.F.L.’s career passing yardage record was published, I made a critical mistake. I posted to my work Instagram account photos of two charts I had created to help me make sense of the passing revolution enveloping the league and the year-by-year progression of the record, which Saints quarterback Drew Brees would set that night against Washington.

Within minutes, the comments came flooding in. My dad said he could teach me Microsoft Excel if I wanted. One friend asked if he could borrow my abacus. Another asked if I wrote my story on a typewriter.

Yes, I did, actually. While wearing a fedora with my press pass in it. Then I sent the story to the office via Western Union.

All reporters have their quirks. One of mine just happens to be writing things out by hand instead of using a spreadsheet. I do this willingly and happily, and not as a subconscious rebellion against technology, or out of obligation or some masochistic delight. This confuses friends, colleagues and even my wife, who can’t fathom why I keep to-do lists, appointments, even birthdays in an academic planner instead of on Google calendar.

On a base level, there’s a very simple reason behind my madness: I tend to retain information better if I write it down. The numbers loiter in my brain, awaiting connections like the one I made during a conversation with the football historian John Turney, who posited that 1994 — when the N.F.L. renewed its emphasis on prohibiting defensive backs from jamming receivers more than five yards downfield — would be a pivot point in examining the explosion of passing numbers.

Hold on, John, let me check. Since I had charted a mess of passing statistics for every season from 1980 to 2017, I was able to discern that, in some categories, he was absolutely correct. 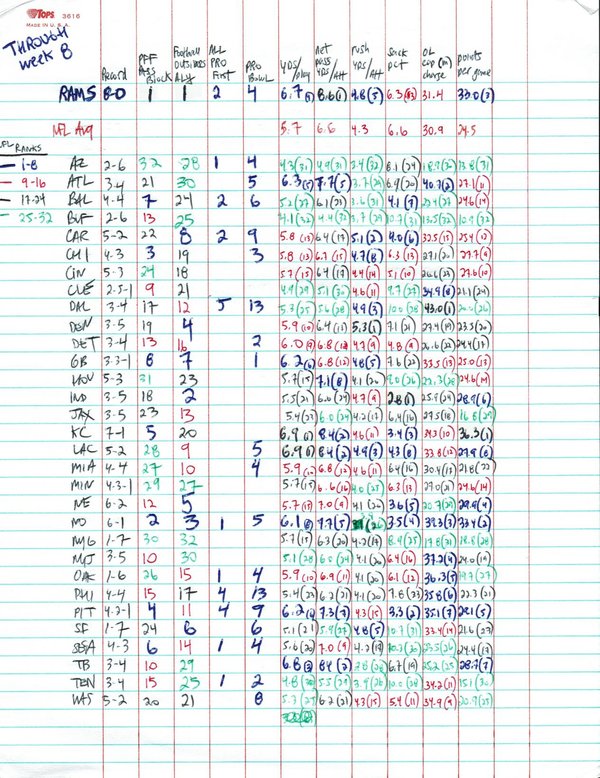 The entire exercise — locating the data, culling what I need and synthesizing it in a format that’s accessible, always with a four-colored ballpoint pen — helps me detect patterns I otherwise wouldn’t have noticed.

These epiphanies used to occur all the time back when I covered baseball. At The Dallas Morning News, two colleagues, Evan Grant and Gerry Fraley, tutored me in the art of tracking a team over a full season. And so I kept a binder filled with pages of various pitching, fielding and hitting statistics for individual players on the Texas Rangers (first half of 2005 season), the Mets (August 2005 through 2009) and the Yankees (2010 through July 2011), and also for those teams as a whole.

Sure, I easily could have clicked onto the invaluable Baseball Reference site and found what I wanted to know. But by logging all the data myself — and the data that I wanted, such as, say, Alex Rodriguez’s efficiency over a certain stretch with a runner on third base and less than two outs — I could pick up on trends.

And besides, I liked having a hard copy just in case.

In case of what? Well, I’m still not sure.

When I moved on to report on the Jets in 2011, I tried keeping a similar book but soon realized it didn’t yield the same dividends. My preferred canvas — reams of Tops data pads, with 13 rows and 38 columns on each page — sat dormant, mostly, until three years ago, when I started researching parity in the N.F.L. For a story about leaguewide mediocrity, I created a multicolored monstrosity — red and green ink, with orange highlighter! — all on one page, of every team’s record through 12 weeks since 2002.

At the end of every season, I sketch out — with assistance from ESPN’s playoff machine — all the different postseason permutations. As in, if Kansas City and Indianapolis win but Cincinnati and Miami lose, which teams make the playoffs? There’s no real value to the endeavor other than convenience: a diagram I can refer to — and mark up — on that final Sunday of the season as I adjust hotel reservations for the playoffs.

We still have another two and a half months until then, though, which means there’s ample time to concoct more valuable (useless) and illuminating (inefficient) charts. Like the one I formulated for a recent piece on the Los Angeles Rams’ superb offensive line — a mishmash of rankings and stats and salary-cap information that makes sense only to me. After the season, I’m going to sign up for data training, at the behest of our digital deputy sports editor, Sam Manchester, who saw my scribblings in the office about a month ago and all but registered me on the spot.

Keep up with Times Insider stories on Twitter, via the Reader Center: @ReaderCenter.

Cancer horoscope: What your star sign has in store for October 2 – 8 | The Sun

We’re home experts, the top 3 most common freezer mistakes & why you shouldn’t defrost food on your kitchen counter | The Sun
Lifestyle News

John Stamos: Bob Saget Didn’t Know 'How Loved He Was' Before His Death

Your Taurus Monthly Horoscope for October

Lil Nas X Pauses Concert Due to a Bathroom Emergency: "I Was Literally Back There Dropping Demons"