I think about cooking mushrooms as soon as there’s a chill in the air and I catch the scent of rain-soaked earth. But why? I was never attuned to mushroom seasons. I’ve never come home from a brisk walk in the woods like some 20th-century food writer, rain boots caked with mud, baskets full of wild varieties that I identified on sight. When I was growing up, my family bought pints and pints of brown- and white-button mushrooms all year round from the supermarket. I remember how they were squashed together and sealed tight, their graying, velveteen caps pressing obscenely against the plastic. But these mushrooms, these cheap, seasonless mushrooms, they taught me almost everything I needed to know — namely, that I loved mushrooms.

Mushrooms — all kinds of mushrooms — have a long-running affinity with cream. The most popular mushroom dish in my family was once spaghetti with mushrooms in cream sauce, followed closely by toast with mushrooms in cream sauce, tied only with chicken and mushrooms in cream sauce. Until a few weeks ago, I would have told you that mushrooms simply belonged with the sweet fattiness of plain, reduced cream. That the two were inseparable. But on a cold, drizzly night, just before I packed up my apartment of 10 years and left New York, I had a dish that changed my mind. Patch Troffer, the chef at Marlow & Sons in Brooklyn, had made a big batch of roasted mushrooms and soaked them in sherry vinegar with spices. These mushrooms were browned and sweet from roasting but also pickled, through and through. He served them on a plate with chile oil, in a little pool of their sharply delicious pickling liquid. 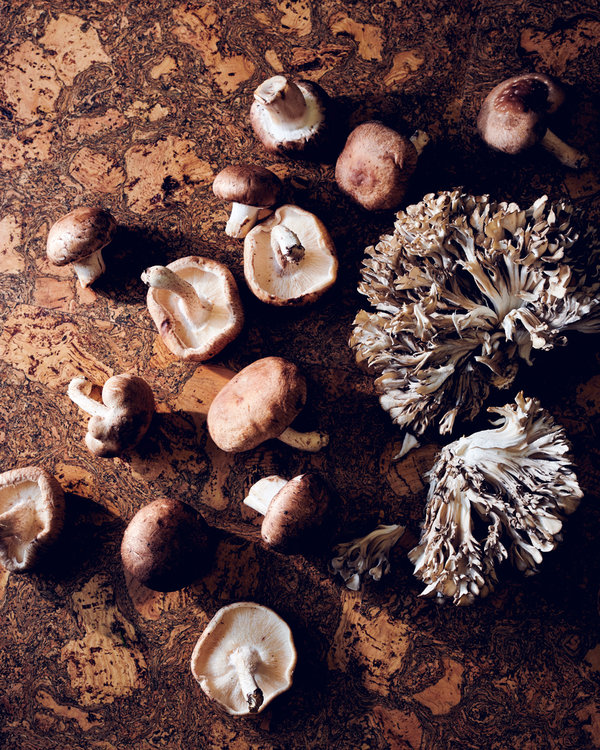 When I emailed Troffer to ask for the recipe, he outlined the framework of the technique. Troffer roasted the mushrooms first, hard, so they were browned all over. Then he deglazed the pan to get all the browned bits still stuck to the metal. He mixed these warm mushrooms and their juices in a big bowl with sherry vinegar, salt and sugar and big glugs of neutral oil. The spice mix he added leaned toward the flavors of my grandmother’s kitchen: ground cumin and coriander seeds, fennel seeds, black pepper and chile flakes. And into the same bowl, he tossed some chopped cilantro leaves, sprigs of dill and celery leaves, and plenty of finely grated raw garlic.

I took notes. The mixing happens while the mushrooms are still kind of warm, Troffer told me, and using plenty of salt and sugar — more than you think — is crucial. I wanted to know about the mushroom varieties he liked best, and I was thrilled by his reply. “I’ve always been a sucker for buttons,” he wrote. Troffer also liked maitakes, for their meaty flavor, and beech mushrooms, which he correctly identified as “cute.” Troffer said shiitakes were a must for their umami, and king trumpets, which weren’t always available, lent the mix a chewy, almost meaty texture when they were.

If I could figure out how to pickle some mushrooms, I could take a jar with me to Los Angeles, where everyone had warned me that fall would come and go in a bright, sunny haze, without my even realizing it. I made them as I packed up my kitchen, lowering the dose of sherry vinegar and eating them plain, almost like a salad, with big pieces of grilled bread and more herbs mixed in. Or piling them up on toast with a spoonful of crème fraîche. I didn’t think Troffer would disapprove of my using all button mushrooms (which is one way of referring to one size of Agaricus bisporus, the cultivated mushroom that’s occasionally found wild). And in the spirit of the mushrooms that taught me to love mushrooms, I did, but only once. The best way to pickle roasted mushrooms turned out to be less focused, more haphazard, wildly mixing up the haul, gathering about two pounds of all kinds from the market, or the forest floor, or wherever it is you typically find your mushrooms.