For his first 30 days staying sober, Mark Lanferman kept a sealed bottle of Georgi vodka stashed in the closet. It was a token of comfort, not temptation, a sign of his resolve.

Mr. Lanferman, 30, said his problems with drinking and drugs started early in life. In school, he said, he was ruthlessly bullied. Other students wanted to spend time with him only when they needed a partner for a science project.

His loneliness led to destructive behavior, he said. He would often dig at his arm with a pencil. Once he drew blood, he would keep boring.

“It felt like, for some reason, me cutting myself was hurting those people,” Mr. Lanferman said. “Every single time I would do it, it was like, ‘I hate them. I wish they would die.’ But it’s me, wishing I was dead.”

In sixth grade, he made a friend, but that led to another damaging compulsion. The friend brought Hennessy to school in a Gatorade bottle and allowed Mr. Lanferman to take generous samples. Soon Mr. Lanferman started spending his allowance on alcohol, cajoling strangers outside liquor stores to buy it for him. His mother never caught on, he said .

Mr. Lanferman dropped out of high school in his freshman year and sold drugs in his East New York neighborhood in Brooklyn. The money paid for his alcohol habit and experimentation with harder drugs — anything to dull the pain.

“I was so lonely when I was younger,” Mr. Lanferman said.

In 2007, he was arrested and sent to a boot camp program that provided substance abuse treatment for nonviolent offenders. He lost 100 pounds and earned his high school equivalency diploma, but when he was released in 2008, he resumed his drinking and drug use.

The next several years were a blur, Mr. Lanferman said. He was shiftless, struggled to maintain relationships, and too often woke up with unexplained injuries or broken bones, in strange locations or beside unfamiliar partners. 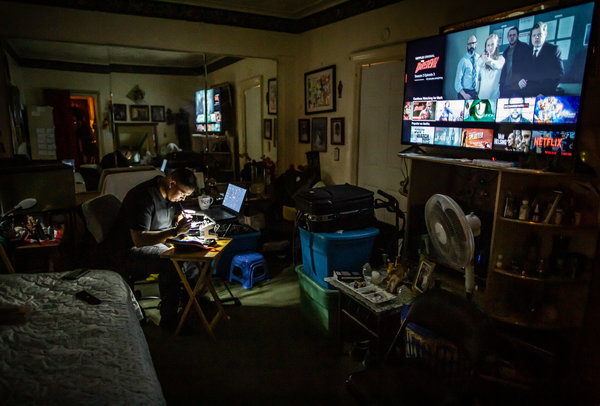 “I knew I was at the bottom, but there was nothing that made me want to get back up,” he said.

From time to time, he woke up in a hospital bed. He had become prone to seizures; doctors warned that his liver was shutting down, and his life was at risk. But Mr. Lanferman would take out his IV and leave against medical advice.

“I was doing everything to hurt myself,” Mr. Lanferman said. “I did not want to be alive, but I was too scared to go jump off my roof.”

The self-mutilation intensified in adulthood, going beyond his arms. He covered cuts with gauze and concealed the bandages with long sleeves. He wore black shirts to mask any blood that might seep through to his clothing, justifying his wardrobe choice to his mother by saying that it made him look slimmer.

Alcoholism took a toll on his appearance. He neglected showers and haircuts; jaundice yellowed his eyes; his skin became saggy and discolored, as if it were rotting. Mr. Lanferman said he looked monstrous and preferred to go out only at night.

“My reputation changed,” he said. “Now I wasn’t Mark the drug dealer, Mark with money. Now I’m Mark, the alcoholic, this rundown guy.”

In 2017, he suffered an emotional breakdown and made a series of frenzied cuts to his right arm with a kitchen knife. His next memory was of his mother’s voice.

“I woke up, hearing her crying,” he said.

Mr. Lanferman was ordered by medical staff into an inpatient drug rehabilitation center, where he stayed two weeks. When he was asked to attend an outpatient program, he agreed — for his mother’s sake. He was referred to the Serendipity program at New York Therapeutic Communities, a member agency of FPWA, one of eight organizations supported by The New York Times Neediest Cases Fund.

When he started his effort to stay sober last year, going 14 days without alcohol was a huge achievement, Mr. Lanferman said, and he felt excited about reaching 21. After he made it 30 days, he gave the vodka bottle in his closet to a friend.

He has now been sober for 17 months.

In August, Mr. Lanferman, who lives with his mother and receives $91 a month from the Human Resources Administration, received a grant of $806.55 from FPWA to buy new clothes as part of his recovery.

Mr. Lanferman sees a therapist multiple times a week and attends therapy to address his social anxiety. He spends a lot of time alone, though he longs for a meaningful romantic relationship, something he has never experienced sober.

In September, Mr. Lanferman was hospitalized again after cutting into his arm several times with a knife.

“I know it could just come out of nowhere,” he said. “I always try to keep myself busy, reading or journaling. I have some pretty dark thoughts sometimes.”

But what has kept him sober is something brighter, even more vivid: the memory of the joy on his mother’s face when he returned from his two weeks in rehabilitation last year.

“I remember coming into the door,” he said. “She looked at me and just gave me a big hug. I was beyond happy. She told me: ‘This is my son.’”

Donations to the Neediest Cases may be made online, or with a check or over the phone.