VANCOUVER, British Columbia — Most comic book heroes have an origin story. Here is Roberto Aguirre-Sacasa’s: He was 8 years old. He was in the supermarket. Next to the register he saw an Archie comics double digest. He begged his mom to buy it for him. “I kind of never let the Archies go,” he said.

Aguirre-Sacasa, 46, “the good middle-age,” he calls it, was speaking in a suite at the Fairmont hotel here. He lives in Los Angeles with his husband and a dog named Ms. Molly, but every week he flies to Vancouver where the CW’s “Riverdale,” now in its third season, and Netflix’s “Chilling Adventures of Sabrina,” which began streaming its first season Oct. 26, both shoot. He’s the showrunner for both, corollaries to his role as the chief creative officer of Archie Comics.

That he’s a (very) senior executive for a company that once sent him a strongly worded cease and desist letter (in his 20s, he wrote “Archie’s Weird Fantasy,” a play in which Archie meets up with the murderers Leopold and Loeb and is later revealed as gay and it’s unclear which was the bigger problem) is just whipped cream on the malted.

With “Riverdale” and “Sabrina,” Aguirre-Sacasa, has become an auteur of moody, sexy teen angst. He is a John Hughes for a darker, more cynical, way more libidinous age. When I asked him if “Riverdale” was a thirsty show, he laughed and said: “Big time. Biiiig time. Big time.”

The Archie universe, which chronicles the milkshakes and adventures of a redheaded quarterback and his cohort, was born in 1941, an offshoot of Pep Comics. Sabrina, “that cute little witch,” who first showed up in a 1962 humor anthology “Archie’s Madhouse” series, is another. 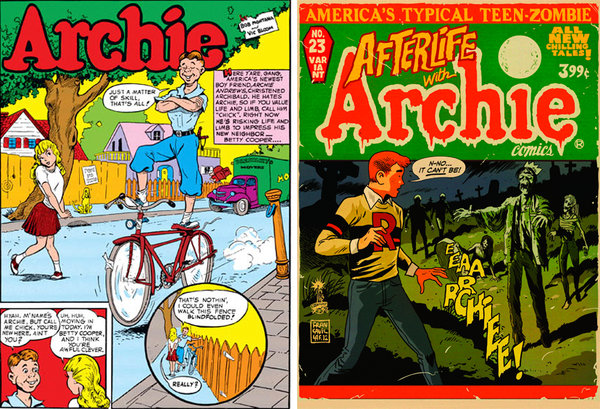 Archie wasn’t really made for boys like Aguirre-Sacasa. Born in Washington, D.C., to Nicaraguan parents, Aguirre-Sacasa knew he was gay early on and until recently, the Archie Universe was pretty much all-white and definitely all straight.

“I wanted to be friends with them,” he said.

After college at Georgetown and an M.A. in English at McGill University and a brief stint as a journalist (“Because Clark Kent was a reporter,” he said), he enrolled in the playwriting program at the Yale School of Drama. Just as he was graduating from Yale, Marvel Comics recruited him; he published his first issues in 2004.

About a decade ago he began pivoting away from theater and toward television, writing first for “Big Love” and then for “Glee.” While he was at “Glee,” he met Jon Goldwater, the head of Archie Comics and proposed a crossover issue, in which the Archie characters would meet the cast of “Glee.” (To sweeten the deal he sent Goldwater a picture of his Halloween costume: Archie.) Under Goldwater’s watch, he oversaw titles like “Archie Meets Predator” and “Afterlife With Archie.”

His first attempt at creating a show, a “Bride of Frankenstein” project, didn’t sell. But as he was becoming Archie’s chief creative officer, he teamed up with the producer Greg Berlanti (who’s responsible for much of the CW’s schedule including “Supergirl” and “Arrow,” and who previously wrote for “Dawson’s Creek” and “Felicity”), and his partner Sarah Schechter, and they put together “Riverdale.” Aguirre-Sacasa described the updated story of the Archie gang as a mix of “Our Town,” “The Breakfast Club,” Hitchcock and grindhouse. He’d first envisioned the Sabrina character as a fun way to close out a season, but then he realized she could be her own show.

“He just genuinely is bursting with stories to tell,” Berlanti said.

Shows like the moody “Riverdale” (I like to call it “Tween Peaks”) and the sinister “Sabrina,” a droll spine-freezer that eviscerates the ditsy ’90s version, probably won’t win Emmys. (“Riverdale” does however clean up at the Teen Choice Awards.) They are almost no one’s idea of prestige TV. Genre pieces — noir for “Riverdale,” horror for “Sabrina” — they are ardently derivative, a homage a minute.

And yet, by throwing in just about everything he’s ever loved — comics and teen soaps and great books and slasher films — and hitting the button for frappé, Aguirre-Sacasa has made something original: shows that are sexy and smart, story-drunk and story-driven, pointedly inclusive. Unlike the comics he read as a kid, these are worlds where everyone — boy, girl, nonbinary, gay, straight, questioning, jock, brain, burnout — belongs. Well, everyone who is preternaturally gorgeous and Algonquin-Round-Table quippy.

I spent a day in Vancouver with Aguirre-Sacasa — who also wrote the book for the Broadway musical “American Psycho” and rewrote the book for “Spider-Man: Turn Off the Dark” and wrote the screenplay for the “Carrie” remake and also has a bunch of other stuff in development that he absolutely won’t discuss — to see what makes his shows so watchable.

The day began at the “Riverdale” stages in a sprawling warehouse, a 45-minute drive from downtown Vancouver. In the parking lot, behind razor wire, was the set for Pop’s Chock’lit Shoppe, with real cakes glistening in the display case. Inside, a humidifier diffused a scent of root beer and pine and there were posters recruiting for an upcoming softball game against the “Sabrina” team. (“Riverdale” would win, 16-9.)

Aguirre-Sacasa arrived around 10 a.m. in a baseball cap and a fluffy Fair Isle sweater. He’d taken the red-eye the night before, but he radiated Geiger-fast-click enthusiasm. His first appointment was a tone meeting, a chance to make sure that a writer and director’s plans for an episode are in line with the showrunner’s conception of the series. Janine Salinas Schoenberg, the episode’s writer, beamed in via Skype. Alex Pillai, the director, as well as a couple of producers and Shamus Whiting-Hewlett, the director of photography, were also present. “We’re going to have a whale of a time,” Aguirre-Sacasa said.

His cultural knowledge is encyclopedic in a World Book, shelf-bucking way. (“I don’t distinguish between higher art and low art,” he would tell me, unnecessarily) Toning the episode, “The Man in Black,” he started with a Simpsons reference, then moved to “On the Road,” “Dracula,” and the recent remake of “The Beguiled.” Stephen King came up, Steven Soderbergh and Ingmar Bergman, too, plus “Casino,” “Double Indemnity,” “Shock Corridor,” the original “Suspiria,” Edgar Allan Poe, “Days of Heaven,” “The Nun,” “The Seventh Seal” and the crusading journalism of Nellie Bly.

As Kiernan Shipka, who stars as Sabrina would later tell me: “His obsession level is like 10 out of 10, 11 out of 10, for anything that he’s passionate about. There are so many layers to his shows that people might not even realize are there. But they’re there for him.”

Or here’s Peter Roth, the president of Warner Bros. Television Group, which co-produces both shows: “I can’t keep up.”

The meeting took maybe two hours. At one point, Aguirre-Sacasa paused to take a call from a “Riverdale” actor who was asking if he could leave his shirt on during an upcoming scene. (The answer was yes.) His ardor, which can skew grandiose (“It’s the fight for Archie’s soul!”), never flagged and I lost count of how many times he used the words mythical, classic, iconic, iconographic, archetypical.

It wasn’t all fanboy exuberance. When Pillai suggested a nifty practical effect, Aguirre-Sacasa vetoed it. He agreed that it would look cool, but he felt it pushed the episode out of realism and into fantasy. “We’re trying to ground it,” he said.

Aguirre-Sacasa was adamant: No matter how outlandish the story, the world and its characters have to feel consistent, grounded, real. As Cole Sprouse, a fan favorite who plays the brooding Jughead explained, “The responsibility for ‘Riverdale’ is figuring out how to infuse real three-dimensional lives into these two-dimensional archetypes.”

Lunch followed (though I never saw him eat) and a couple of private production meetings. I wandered the set, stepping into familiar high school hallways — all moody blues and faded golds — and teen-dream bedrooms and then into some new locations, a speakeasy-style hangout and a decrepit bunker where the parents, now played by back-in-the-day heartthrobs like Mädchen Amick, Luke Perry and Molly Ringwald, used to hang out. (Making the John Hughes parallel explicit, this season includes an ’90s-style flashback episode with the younger actors playing the parents; in homage to “The Breakfast Club,” it’s called “The Midnight Club.”)

Then it was a three minute drive over to the “Sabrina” set, where Shipka, outfitted in a flowing rose gold wig, was starring in her witch school’s passion play. The passion was Lucifer’s and the school auditorium was lit with open flames.

Aguirre-Sacasa took me on a tour of the set, which has 38 distinct spaces designed by Lisa Soper. The level of detail was literally dizzying. We paused in a five-sided room, home of the Academy of Unseen Arts, which has paintings borrowed from the horror master Clive Barker lining the walls and a statue of the goat god Baphomet in the center. “Everything has a story,” Aguirre-Sacasa said. “Everything has a reason.” Everything had a working fire place, too. Spells were etched into the window glass.

We moved to the wardrobe department where bolts of sequins and tulle crouched on shelves near a tidy maze of suits, shimmering gowns and schoolgirl chic. One whole rack bulged with timber wolf pelts. Real ones.

A little while later, the cast, dressed in sweatshirts, ceremonial cloaks and Gucci shoes with insect clasps, trooped upstairs for a table read of “Lupercalia,” an episode for the second season. Someone coughed and Aguirre-Sacasa called for Purell. As the cast read the script aloud, he occasionally tapped at his laptop, which his husband, the production stage manager Barclay Stiff, had outfitted with keyboard stickers: a Spider-Man on the S, a Joker on the J, “SHAZAM!” for return. He laughed as loud as anyone, maybe louder.

When the reading finished, the cast assembled for an Instagram teaser, slicing into a cake iced with “Welcome to the Coven.” It vomited edible, golden pearls.

Aguirre-Sacasa stayed behind to tone the “Sabrina” script, while some of the production staff headed over to Riverview Hospital, a former mental hospital where “Riverdale” sometimes shoots.

Aguirre-Sacasa, who is convinced that Riverview is haunted, arrived after dark and didn’t leave until after midnight, which wasn’t especially late. Not like the time he left that “Sabrina” graveyard shoot at 4:30 a.m. and frogs attacked him on the way to the car. “It did feel like a scene out of a horror movie,” he said delightedly. Expect to see it repurposed in some later script.

His fanboy soul, his open heart, his until-the-wheels-fall-off zeal, it’s felt everywhere, from the bonkers chandeliers in the headmaster’s office (dragons grip the bulbs in their talons) to the friendly way the “Riverdale” cast mingles off-camera with one another, and with him.

As Lili Reinhart, who plays Betty, said: “It’s pretty remarkable how much he is involved with us and our lives. We’re friends, which is really wonderful, I think, and pretty rare.”

Aguirre-Sacasa has built these worlds and he’s welcomed all of us — actors, writers, gaffers, teen viewers and viewers of good middle-age — to enjoy them as much as he does. Every episode is an open invitation to share a hamburger, to crash a school dance. That dance might end with the discovery of a corpse. But still.

I asked him why he was so attracted to these coming-of-age stories and he said he’d never really put together that they were coming-of-age stories. He said maybe it was because adolescence is something everyone goes through or maybe it was a way to hang on to his own youth or maybe because the stories of those adolescent Archie characters were the first stories he really loved.

Then he gave a good-middle-age answer: “I will definitely have to talk to my therapist about it.”