Mickey Mouse, Popeye, Superman, Captain America: These and other characters are among the 37 items on display at the Library of Congress, courtesy of a gift this year by Steve Geppi, a comics distributor and owner of the Geppi Entertainment Museum, which closed in June.

The exhibition opened Tuesday, with some of the more than 3,000 pieces from Geppi’s collection, which includes comic books, movie posters, original artwork and toys, many of which had been at his museum in Baltimore. Sara W. Duke, a curator at the Library of Congress, said the show makes items “accessible to visitors who might not think of the Library of Congress as a venue for pop culture.”

Of donating his collection, Geppi said,“When you own something, it’s no fun sitting in the corner with no one to share it with.” He added that he hopes the gift will elevate comic books and pop culture.

Here are some of the highlights. 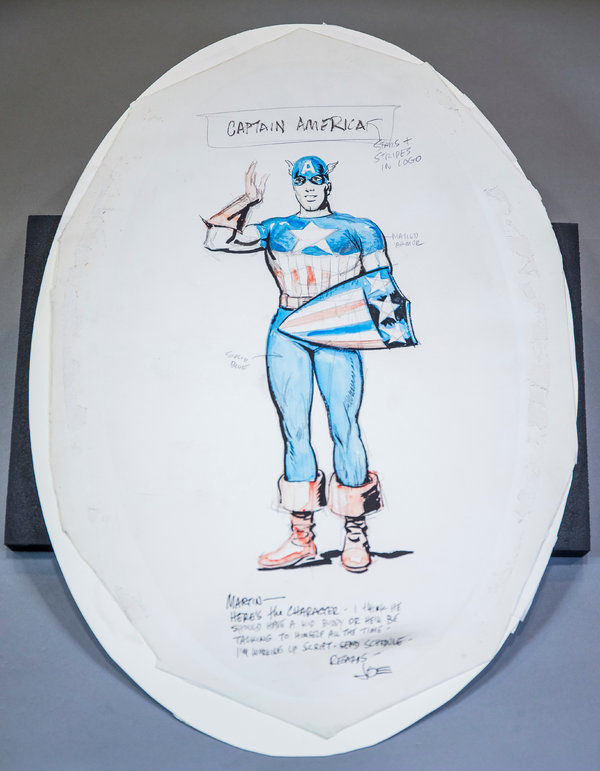 One of the most significant items is an original ink and watercolor drawing of Captain America by Joe Simon, who created the patriotic hero with Jack Kirby. “We have Captain America in the same display case as G.I. Joe,” Duke said. “It’s really about not just the comic book industry but the entertainment industry and how they responded to war.” Captain America, she noted, helped make it popular to participate in the war effort. The cover of issue No. 1 has the hero famously socking Hitler in the jaw. On the drawing, Simon wrote: “I think he should have a kid buddy or he’ll be talking to himself all the time.”

“With motion-picture tie-ins now, small children are going to recognize him,” Duke said. “And fans of comic book history should flock to see him because it’s not often we put such a treasure on display.” The exhibition also includes a copy of Captain America No. 100, from 1968, when the hero returned to a starring role in comics after his series was canceled in 1954. Issue No. 100 proclaims, “Cap, in his own magazine at last!”

The comic strip character The Yellow Kid made his debut in 1895, and is an example of “what people might call Victorian-era comics” or proto-comics, Duke said. The character, created by Richard F. Outcault, has a colorful history — including a legal battle over a version of it in The New York World and one featured in The New York Journal. Those matters — like a creator’s ownership of a character and the related lucrative licensing opportunities — still resonate today. “The Yellow Kid was on gingersnaps and whiskey,” for example, Duke said. (The origins of the expression “yellow journalism” can also be traced back to the character.)

You will believe that a mouse can fly if you look at the first page of “Plane Crazy” (1928), the animation storyboard that depicts the first drawing of Mickey Mouse. “It survived from 1928 on very thin paper,” Duke exclaimed. The resulting animated short shows Mickey reading a “How to Fly” book, with a portrait of Charles Lindbergh and the notes “Ace of Aces” and “Lindy.” It also includes Minnie Mouse and a crash landing eased by Minnie’s bloomers doubling as a parachute. Duke said that while “Plane Crazy” was the first Mickey drawing, “Steamboat Willie,” the fourth animated short, was the first to be released.

“A lot of original collections of magazines like this don’t exist very much because the paper was so brittle,” said Megan Halsband, a reference librarian. “Because they were all printed on pulp paper, a lot of them did not survive. One of the strengths of Mr. Geppi’s collection is that it has a number of those magazines that are almost in pristine condition.” Among the publications are Practical Electrics No. 10 (1922) and Amazing Stories No. 5 (1928), two magazines edited by Hugo Gernsback that helped introduce science fiction to the public. (He introduced the term “scientifiction,” but it never took off.) “We all know the phrase science fiction now but I’m not sure that word or that genre was as ubiquitous then,” she said. These issues from his collection were chosen for display for their cover images, with concepts of “technology and scientific exploration that were percolating in pop culture before they became reality.”

This G.I. Joe prototype from 1964 came five years after the first Barbie doll was made but they had a lot in common. “You make the money on the accessories, the clothing and the accouterments,” said Amanda Zimmerman, a reference assistant. G.I. Joe was conceived by Stan Weston, a licensing agent, who took the idea to Don Levine, in research and development for the company that would become Hasbro. “Weston sold the rights to Hasbro for $100,000, opting not to take the risky option of 1 percent of future sales,” Ms. Zimmerman said. (He would have made millions if he had instead chosen the royalty deal.) But Levine took the idea and ran with it, she noted, and coined the term “action figure” to combat the notion that boys would not play with dolls. Another Barbie link: “They took a Ken doll and shaved his face down to make him less baby faced and more rugged.” The prototype has a hand-sewn uniform and bars that indicate that G.I. Joe was a sergeant who had served time overseas. When it went to auction in 2003, it sold for just over $200,000.

The exhibition will be on display through Feb. 11 in the Great Hall of the Thomas Jefferson Building in Washington; loc.gov/visit.

George Gustines is a senior editor. He began writing about the comic book industry in 2002. @georgegustines • Facebook