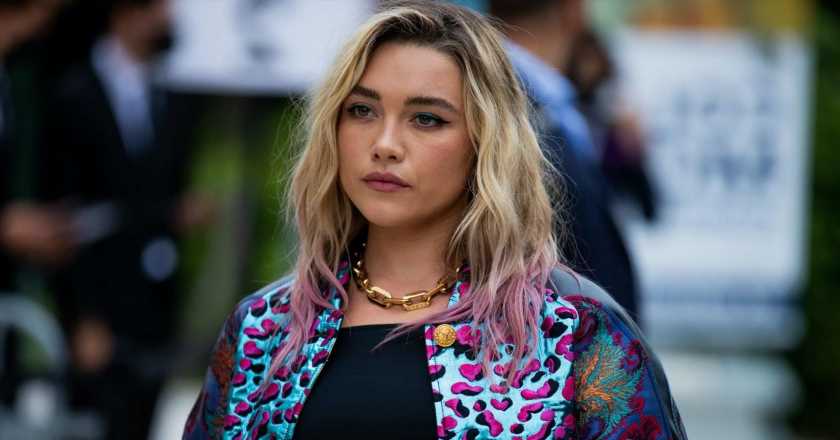 Kayleigh Dray is Stylist’s digital editor-at-large. Her specialist topics include comic books, films, TV and feminism. On a weekend, you can usually find her drinking copious amounts of tea and playing boardgames with her friends.

Florence Pugh has a theory about why her relationship with Zach Braff “bugs people” so much, and it’s all to do with the unreasonable expectations we place upon women in the spotlight.

It’s difficult to find something we can universally agree on, but surely it should be this: relationship age gaps really shouldn’t matter in this day and age – especially now, when we have far more important things (read: Covid and football coming home) to think about.

Despite this, though, age gap romances – particularly those which feature celebrities – continue to prove fodder for gossip, not to mention judgemental comments from complete strangers. We saw it in the reaction to Keanu Reeves’ relationship with Alexandra Grant. In the ongoing slew of tabloid headlines about Harry Styles and Olivia Wilde’s rumoured romance.

And, of course, we’ve seen it with Florence Pugh and Zach Braff ever since the couple first went public with their relationship in 2019.

Florence Pugh and Zach Braff have been subjected to online abuse over their relationship.

Currently starring opposite Scarlett Johansson in Marvel’s Black Widow – in cinemas now – as Yelena Belova, Pugh has been working the press circuit and drumming up excitement for her role as the fierce fighter, gymnast, and expert marksman.

“I’ve never been on a film this scale – I don’t think anyone has other than all the superheroes – but it’s incredibly daunting coming up to this and knowing what prep is Marvel expecting you to do,” she recently told MTV.

“I definitely had no idea what they were going to expect from me, and Scarlett was super helpful with all of that.”

While Marvel fans have lapped up any and all details the actor has shared about the film, however, it was inevitable that Pugh – who prides herself on being “a very honest and open person with interviews” – would be asked at some point about the online abuse that she and Braff have been subjected to over their relationship.

Online abuse, we hasten to add, that prompted the actor to disable comments on the rare photos she posts to Instagram with or of her partner.

Pugh, though, doesn’t think it’s her and Braff’s 21-year age gap that’s the problem; rather, it’s that she’s gone against public expectation in dating the director.

“I think it bugs people that it’s not who they expected,” Pugh explained to The Sunday Times.

“Who should you be with, then? Timothée?” asked the interviewer, referring to Chalamet, aka the actor’s onscreen love interest in Little Women.

“Exactly,” she replied. “But it’s my life and I’m not doing anything to please people or to make it a better headline or story.

“I do not need you to tell me who I should and should not love. I would never in my life ever tell anyone who they can and cannot love.”

Urging anyone who couldn’t respect her decision to date Braff to stop following her, Pugh added: “The abuse you throw at him is abuse you’re throwing at me and I don’t want those followers.

“I will not allow this sort of behaviour to continue on my page,” she added. “I’m not about that. It makes me upset, it makes me sad that during this time when we really all need to be together, we need to be supporting one another.

“We need to be loving one another right now. The world is aching and the world is dying and a few of you have decided to bully for no reason.”

Now, speaking to The Sunday Times, the actor referenced her social media bullies once more, saying: “It’s so weird to me to go on to someone’s page and shit on it. That’s so not my nature – to go and bully for the sake of bullying.”

“It’s such an odd thing that we’ve become OK with in the past 10 years of social media,” she added.

“The thing is, people want Instagram to be a nicer place, they want to see nice things. They want to be inspired and they want to be happy. I don’t mind you not liking me, that’s absolutely fine. In which case don’t follow me.”

Pugh’s right, of course: it’s her decision, and her decision alone, who she decides is worthy of her romantic affections. If you disagree, that’s fine – but only if you keep it to yourself.

After all, there’s a reason we’re all taught the phrase, “If you can’t say something nice, don’t say anything at all” from such a young age.

Black Widow is available to watch in UK cinemas now.