What would you like to see here? Email us at [email protected]

Hello! Welcome to your weekly roundup of what’s been going on in pop culture.

Ezra Miller’s recent red carpet looks have been an collection of gender-bending, surrealist outfits. He took that aesthetic to a shoot for Playboy, bunny ears and all. I fully endorse his kookiness. (He’s in the new Harry Potter universe film. Read Manohla Dargis’s review of “Fantastic Beasts: The Crimes of Grindelwald” here.)

How about Ezra keeps doing these photoshoots even when there’s no movie to promote pic.twitter.com/cjiqbucBfj 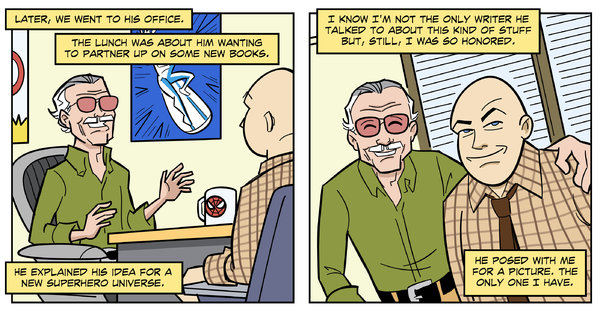 The architect of pop culture’s current love affair with superheroes died this week at 95. Here’s some of The Times’ coverage:

• Read this comic strip that Brian Michael Bendis wrote about Lee’s impact on his life and work.

A. O. Scott called “The Ballad of Buster Scruggs” one of “the darkest movies by Joel and Ethan Coen, and also among the silliest.” Netflix gave the Western a very, very limited release in theaters, but it’s also now available to stream from the comfort of your own couch.

First he offered up free merch to people who could prove they voted in the midterm elections, now he’s switched his Instagram account to public. That’s a lot of Frank Ocean, by his elusive standards. He welcomed fans to his once-private account with a shirtless selfie, and the account has already been flooded with predictably adoring comments.

[Want to get pop music reviews and stories without having to actually search for them? Sign up for our music newsletter, Louder, and we’ll send them straight to your inbox.]

Watching the newly released Aretha Franklin documentary “feels like an act of worship and a trip to the moon,” writes Wesley Morris, even if she wasn’t sure she wanted us to see it. “Amazing Grace” chronicles Franklin making her live album of the same name over two nights in 1972.

David Hockney’s “Portrait of an Artist (Pool with Two Figures)” sold for $90.3 million at Christie’s Thursday night, breaking the auction record for a living artist. (You know the one — there’s a horse version of it in “BoJack Horseman.”)

“Chop Suey” by Edward Hopper, best known for his depictions of American loneliness, sold for $91.9 million at Christie’s this week. “Really, $100 million for a Hopper? I don’t know how they come up with these valuations,” said one New York gallerist.

7. Alfonso Cuarón in black and white

The trailer for the Oscar contender “Roma,” the new movie by Alfonso Cuarón (“Gravity”), is meditative and lovely. The final shot, of kids lying under dripping laundry hanging in the hot sun, sold me on the movie, which comes to select theaters Nov. 21 and Netflix on Dec. 14.

In an Instagram story, Lorde accused Kids See Ghosts (Kanye West and Kid Cudi’s rap duo) of stealing the design for a large, neon-lit transparent floating box she first used at Coachella in 2017. Kids See Ghosts used a similar suspended rectangle for its performance at a festival over the weekend. We spoke to the designer of Kids See Ghosts’ box.