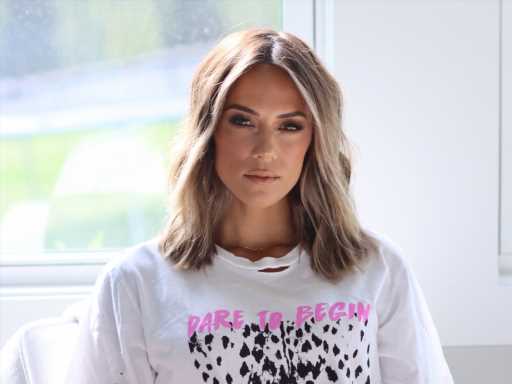 Nearly six months ago, country singer and beloved One Tree Hill star Jana Kramer made one of the hardest decisions of her adult life: she filed for divorce from her ex-husband Mike Caussin, walking away from their life together after six tumultuous years of marriage during which they’d welcomed two kids, daughter Jolie Rae and son Jace Joseph. If you want to know the details of their split, or their initial separation in 2016, Kramer has a podcast and a book in which she’s more than candid, but suffice it to say there was infidelity, and then infidelity again.

In a new interview breaking down her collaboration with LULUSIMONSTUDIO on a line of t-shirts with slogans like “badass mama,” “better off,” and “girls weekend” (modeled adorably below by Kramer’s daughter Jolie), the Kramer I speak with is just as candid as the one I’ve listened to and followed on social media about everything from co-parenting to dating after divorce, all while recovering from the trauma of her abusive relationship with first husband Michael Gambino, an experience she’s only come forward about in recent years.

“The first month [after filing for divorce] I was just like, there’s no way I’ll be able to get through this,” Kramer tells me. “But you just find a way, you just do, it’s amazing. I mean, granted, I still have really hard days and I cried yesterday — but you will get through it, and every day gets a little easier…You become proud of yourself that you were able to make that tough jump.”

For me, I’ve been in one marriage. On paper, that’s not what it looks like, but my last marriage was — to me — that’s what a marriage was.

While rebuilding her life these past six months, the mom of two seems to have thrown herself into her work, from the new t-shirt line to new single “Voices,” released on Sept. 24, and the promise that she has more new music coming: When I ask if she’d ever consider recording a divorce album à la Kacey Musgraves’ Star-Crossed, Kramer assures me it’s coming(!): “I’m working on it…definitely, it’s coming.”

Mostly, I ask Kramer for advice: What would she tell another woman who isn’t sure if they’re strong enough to leave their relationship? (Apparently, lots of other women are asking her this too.) How do you restore your confidence enough after a series of bad relationships to get back out there and date? (Kramer’s famously been linked to Jay Cutler, Kristin Cavallari’s ex-husband, since her split from Caussin.) Her answers often boil down to this: it’s hard, unbelievably hard, almost all of the time. But the only thing worse would be staying put: “I think back now and I’m like, I wish I would have left sooner because this is so much better than what I was trying to do.”

Read on for our full conversation with Jana Kramer below.

On her new line of LULUSIMONSTUDIO shirts:

So I’ve been wearing LULUSIMONSTUDIO shirts for the past few years. They’re just fun, they say fun things, I’ve always liked wearing them, so I always tag them and they were like, we should do shirts together…what do you want to say? And I was like, I’d like to kind of tell a story with where I’m at my life. AI like to say that I’m better off, I dare to begin, I just need wine, I’m a badass mama, and I want to have a girls’ weekend. So kind of where I’m at and just [having] a little fun with it.

On her new song “Voices”:

It just kind of brought me to my knees because it was just such a song that I needed it. I feel that a lot of people with negative voices in our head, it’s really kind of hard to get out of that headspace. This song kind of helped me realize that, like, OK, like I don’t need to listen to these voices because they’re not doing anything for me, they’re not serving me. And I’ll be better if I get up and start believing the other voices in my head, the positive ones.

[Kacey Musgraves’] “Breadwinner” is my favorite song. I’m like, can I just send this straight to my ex? It’s so good.

We control a lot of our happiness. That starts with not listening to those awful voices.

On how she’s misunderstood:

It’s hard because people are like, oh my gosh it’s her third marriage. And I’m like look, my first marriage I knew the guy for two weeks. I went to Vegas, didn’t know him, like that’s not a marriage. For me, I’ve been in one marriage. On paper, that’s not what it looks like, but my last marriage was — to me — that’s what a marriage was. And people are like, oh you just move on to the next person. And I’m very like — I’m not one of those crazy daters. I’m very careful with who I have in my life. They’re calling me like a J-Lo and I’m like — can’t we just all be happy? I mean sure, if I’m going to be the next J-Lo, great, but I’m just trying to live my life and be happy. People have been all up in arms about that Christina Haack girl — let’s just let people process the way they want to process, love who they want to love. You don’t know the ins and outs and the healing work that people do. So it’s like, let them love and be happy.

It’s hard co-parenting — not having the kids, having the kids solo. It’s definitely a transition, some days are harder than others. Like some days I can’t wait for them to leave and other days I’m like this is not what I wanted this isn’t fair. So it’s definitely been really hard but I’m trying again to remember that no matter what I’m so blessed to have my two babies and they’re just incredible, they kind of keep my mind in check when I start to question why things happened the way they did. Whenever I’m with them I’m like no matter what, I was meant to have them, it’s just I wasn’t meant to stay in my relationship, which was a bummer — is a bummer, to like realize that and have that reality. But when something’s toxic, you gotta get out. And I think it’s important for them to see. I think at the end of the day my ex and I are happier and we’re better parents…at the end of the day, it’s been really good for them to have happier parents.

I think back now and I’m like, I wish I would have left sooner because this is so much better than what I was trying to do.

On dating as a single parent:

It’s definitely something I’ve spoken to my ex about too. We say it needs to be a serious relationship before we introduce our kids to someone. I mean, my kids have not met anybody and I don’t know when that day will come. But right now I’m really protecting them because it’s not fair for them to have people in their lives and then have them be taken away. They’ve gone through enough transition so, for my ex and I, we’ve said that won’t happen until we’re in a serious relationship.

On how to leave a bad relationship:

I get so many DMs of women being like, ‘I want to leave but I just don’t know how and I don’t feel like I can do it,’ and it’s like, I get it, I was that way for five years I’m like how do I really leave and could I really do this by myself? The first month I was just like, there’s no way I’ll be able to get through this. But you just find a way, you just do, it’s amazing. I mean granted I still have really hard days and I cried yesterday but like — it’s still, you will get through it, and every day gets a little easier. So now I’m like almost six months removed from it and you become proud of yourself that you were able to make that tough jump. I think my only advice is ‘you can and you will get past it and you will be able to move on.’ And it’s just so much better than staying stuck in something. I think back now and I’m like, I wish I would have left sooner because this is so much better than what I was trying to do.

“Breadwinner” is my favorite song. I’m like, can I just send this straight to my ex? It’s so good.

On the trauma from her first marriage:

It’s definitely hard and the hardest part is, when I’m dating now, talking to people, to have to kind of explain that of like, ‘This is what I went through. But I’m also on the other side of the abuse too. But also it’s something that I have to be mindful of because there’s things that I might not see with clear eyes. For me, personally, I just have to continue to do my work and my healing because that’s part of it, especially being in really bad relationships for a long time. So that’s just my work right now.

On having confidence in the dating game:

It’s so hard. I was even having a conversation with my girlfriends today because as women, we overanalyze things. Like why are they not texting us back, is it something where I’m not enough or did I do something wrong? And really at the end of the day, as long as you’re being authentic and being you, their reactions have nothing to do with you. That’s their own stuff. It’s their own issues. And so I just think remembering that, okay, I’m being my most authentic, healthiest version, and if it doesn’t fit with that person, that doesn’t mean that there’s something wrong with me.

There will be someone that will cherish every part of you, the broken, the good, the healthy. That’s the end of the game, that’s what you want.

On what she’s looking for now:

I just want someone nice. I don’t care what they do, what profession they’re in. It really doesn’t matter to me. I just want a good human, someone who is on the same level as far as a parent who understands it. But there’s definitely not in the dating world like ‘you have to be this’. I just want someone that is on the same path as me with growing and healing and also if they understand being a parent that’s a plus for me too.

This interview has been edited and condensed for clarity and length.