LOS ANGELES — Here is Hollywood, where the young, the beautiful and the inspired come to live lives of disappointment marbled with betrayal.

They spin gold into flax, striving to placate the unworthy sufficiently so as, one day, to be admitted to their number. Who might be immune? Only a philosopher.

Ricky Jay came to Hollywood as an acolyte in 1972. He was 26 years old, and had been practicing magic since childhood. He was a world-class card manipulator and thought to be the youngest performer ever to play “The Ed Sullivan Show.”

He came to study with the masters of close-up. They were Dai Vernon and Charlie Miller. Close-up is card magic practiced, eye-to-eye, across a table.

Vernon was world famous as a performer, and preceptor. His “Revelations” was a Talmudic commentary on S.W. Erdnase’s “The Expert at the Card Table,” the proof-text of modern close-up. Miller demonstrated his magic skills at the poker table, where a moment’s deficiency was paid for with one’s life.

These aging masters lived on for 20 more years, and Ricky remained where the fates had flung him. He died here on Saturday

Our great sage Johnny Mercer wrote, “Go out and try your luck / You might be Donald Duck / Hooray for Hollywood.” But Ricky, as the Stoics taught, did not enter that race. He achieved fame and adulation, but like the warrior monk or the Hasidic master, he sought perfection.

He spent five or six hours a day practicing. He did it for 60 years. And, like all great preceptors, he was, primarily, a student. His study was the metaphysical idea of Magic, which found expression not only in performance, but in practice, commentary, design and contemplation. They were all, and equally to him, but expressions of an ideal.

His teachers, like those of the great priests and rabbis, were the long dead — Matthias Buchinger, Johann Hofzinser, Max Malini, Jean-Eugène Robert-Houdin. These magicians of past centuries were, to Ricky, at least as real and present as his friends, and much more so than anyone outside our number.

We met in New York in 1985, introduced by Jules Fisher. Jules was lighting some play of mine on Broadway, and took us to dinner. Over what was probably not pousse-café, Ricky took out a deck of cards and stunned us into admiration. I’d never seen close-up before. It transformed me from sophisticate into gone goose.

We became friends, and I found the experience of this metamorphosis not unique to me, but rather, universal.

And we all adored him, and loved caring for him, our Ur-Kvetch.

In 1994, I directed his Off Broadway show “Ricky Jay and His 52 Assistants.” It ran for a year, and I was told it was among the most-reviewed magic shows in history.

He appeared in a 100-seat theater, in a drawing-room set, with a deck of cards, and, for two hours, reduced the wise and blasé of the metropolis to a state of astonishment. No one who saw the show has ever forgotten it.

In performance, Ricky was like Glenn Gould, the heaven-sent performer of Bach, who played with such perfect simplicity that all who heard remarked not “what a great performer,” but “what magnificent music.”

Like any great master, he was, of course, a naïf, but the tortures of show business, “Where Nope Springs Eternal,” left him perplexed and hurt, though never embittered. 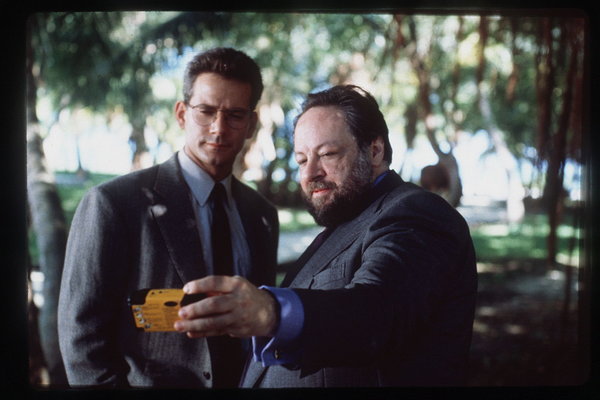 I had seen Ricky onstage in 1982, as Philostrate in “A Midsummer Night’s Dream” for Shakespeare in the Park, and scarfed him up to act in films. I note my “House of Games,” “Things Change” and “The Spanish Prisoner,” along with five other features and a bunch of T.V. episodes.

Like many another great performer, he made a superb actor. For he understood the essence of the thing was no different from any other performance: “You’re there for one purpose only: to please the audience. Come on, say the stupid effing words, and get off.”

In his off-hours he wrote on magic and allied subjects: “Learned Pigs & Fireproof Women,” “Cards as Weapons,” “Jay’s Journal of Anomalies,” “The Magic Magic Book.” He lectured on the theory and practice of deception; on the confidence game for law enforcement; on concealment for the C.I.A. And that’s not all you get: He collected and curated one of the world’s great libraries of magic and allied arts — books, posters, prints, and broadsides.

He was the truest friend, and practiced in the best friend’s best response: “You bet.”

I was invited by William H. Macy to a picnic at his joint in Vermont. I called Ricky for ideas for a gag or effect one could do outside.

“Come on,” he said. “Where would I find such a thing?” Pause pause. “Well, of course, there’s ‘Divertissements et Illusions Champêtres,’ 1791.” And then he named three more sources.

I was doing a bunch of gags for Funny or Die in 2010, and came up with “June Crenshaw, Sex Kitten to the Supreme Court.” The title, of course, suggested the need of a project to accompany it, so I called Kristen Bell and Ed O’Neill and asked them to show up for a 10-minute gag, a black-and-white, grainy, faux skin flick, supposedly shot in 1938.

But on the set, it occurred to me we needed an intro. So I called Ricky, waking him up. He grumbled, came right over, and I handed him the penciled script. He glanced at it, and portrayed the Narrator of the series “Lost Masterpieces of Pornography,” introducing “these films, discovered in the woodworking shop of a Beverly Hills dentist.” Do check it out.

He was a devotee of the most ancient rule of the movie business: “Gags first, filming as time permits.”

Here he, and we, his cohorts, were like the hunting dog playing “fetch” — he doesn’t care if it’s a partridge or a tennis ball, he’s going to get it. To Ricky, the gag, the joke, the magical effect and the plot of the play were all, correctly, understood as mechanical representations of the same idea: Get their attention, reward it with surprise.

Ricky and his wife, Chrisann Verges, were coming to our house for Thanksgiving as usual this year. Chris called Thursday morning to say he was tired, and she came by herself.

She called on Saturday to say he had passed on.

My first thought was of the Hippocratic oath, and these provisions: to guard all secrets as silent as the grave, and to treat your teachers with more devotion and honor than you would your parents.

Like the Spartans, Ricky was perfect in obedience to his laws. I worked with him for 30 years, and he never revealed a secret. He leaves his beloved wife, a legion of admirers, and a small and utterly devoted group of friends. He never had a protégé, but most certainly some ne’er-do-well, perhaps yet unborn, will one day discover his writings and films and, through them, be admitted next in the chain of devotion to which Ricky dedicated his life.

Hollywood is, at best, the cultural capital of Los Angeles. There is no literary salon. There is no need, as nobody can read. We do not have the equivalent of Hemingway’s Café de Flore, Tom Wolfe’s Elaine’s, nor the Algonquin Hotel’s Round Table.

Frank Case owned the Algonquin. The illuminati of New York in the ’20s — among them Dorothy Parker, Robert Benchley and Harpo Marx — made it their resort. Thither they would repair to drink and say amusing things — their drink of choice was the martini. Case noted that whenever they ordered one they instructed the waiter, “Have John make it.”

Case went to John, the bartender, and said, “I don’t understand. There are only two ingredients in a martini. What’s special about yours?”

John said, “Oh. You have to make it with love.”

David Mamet is a playwright, author and director.